Last week, I wrote about my Uber experiences in Buenos Aires. Drivers are effectively scamming the company (read more here) and a reader was asking in the comments sections what is the situation with the ATMs in the country.

It seems that much hasn’t changed with the ATMs in Argentina except that you can actually use foreign cards nowadays and they are not always out of the cash like back in 2016 (read more here) when two our of three machines at the airport were out of notes.

The maximum amount that I was able to get out of the ATMs was 3,500 ARS. The fast selections were for much lower amounts. My selection for 4,000 ARS was denied. 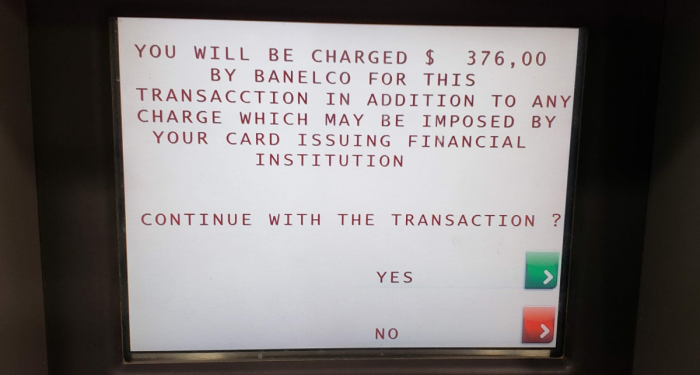 Remember that 4,000 ARS would have been around $100 at the time I tried to make the withdrawal. Hardly a high amount.

The ATM fees are completely out of control. You should only use them if you have a card whose issuer reimburses the foreign fees (like mine does). The fees that all the three ATMs charged were identical at 376 ARS or $9.90 USD at today’s exchange rate.

Considering the extremely low withdrawal limit, you are essentially paying 10% for the privilege of using the ATM.

Most of the establishments do accept credit cards and you need to pay for hotels using one if you don’t want to pay the VAT. You do need cash for taxis, some restaurants and shops that may have “issues” with their card machines.

If you have easy access to crisp $50 and $100 US bills that would be way to go. There are still plenty of unofficial gambios on Calle Florida (heard the magic words) where you should get better exchange rate than at the official places (their spreads looked rather high). Just remember to get a few quotes first.

Just had a look at my online bank statement and seems that all these ATMs are handled by FIRST DATA and thus the sky high fees for foreign card usage. This is nothing but highway robbery to charge a minimum 10% fee for withdrawals combined with ridiculously low limits.

It was nice to see that they had new 500 ARS notes that are worth like $13 after the recent devaluation of the peso.