It has been widely reported on the Icelandic press that the Wow Air has been unsuccessful on its quest trying to sell bonds to foreign investors to fund its operations and it is now seeking help from local banks. 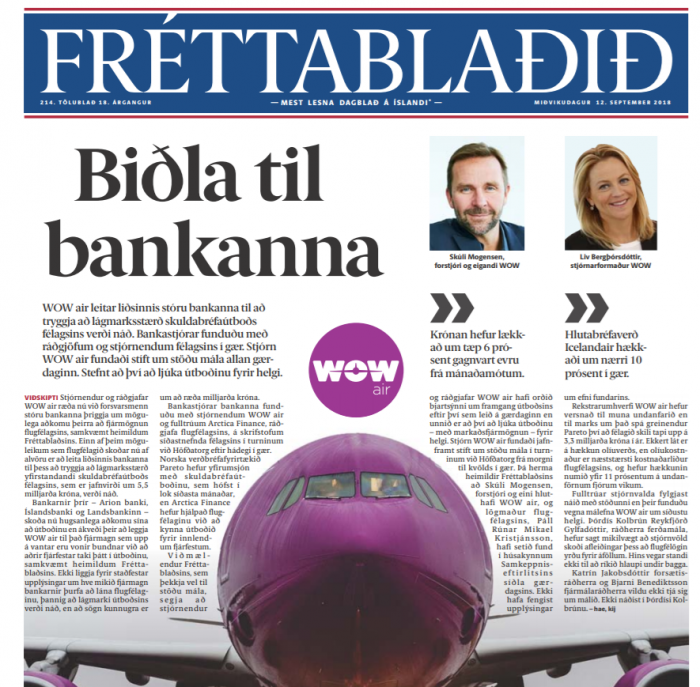 The airline is important for the Icelandic tourism industry and the uncertainty surrounding its future has devalued the currency roughly six percent over the past two weeks.

Here’s an excerpt from the Kjarnan (access their piece here):

Skúli Mogensen, CEO and owner of WOW Air, together with the company’s board of directors and advisors, are now trying to get the banks, Arion Bank, Íslandsbanki and Landsbanki to help fund the company and thereby ensure the company’s operations.

This is stated in the newspaper Fréttablaðið today . Furthermore, Skúli has met with the Competition Authority together with his lawyer yesterday.

In recent weeks, WOW Air has sought to secure funding of 50 to 100 million euros, or up to over 13 billion.

WOW Air could be too big to fail in Iceland as the tourism industry is so important for the economy. Government may need to use one of the banks to bail them out if it comes to that.

It is not in that distant past when the Iceland had to nationalize most if not all of their banks and institute currency controls.

But does the country really need to airlines with the same business model of shuttling passengers between North America and Europe offering them a stopover in Iceland? And how many times passengers really want to take the stopover in a country where the taxi drive to the city center and back likely cost more than their plane ticket?

Marriott Bonvoy has been unstable ever since the Marriott Rewards and SPG program merged back in August 2018 due to outdated IT implementation (and...

Accor ALL Worldwide Up To 40% Off Private Sales January 8,...