United Airlines just sent out emails to their Premier customers informing them about new changes to the boarding process on United flights and improvements for Premier Gold members. 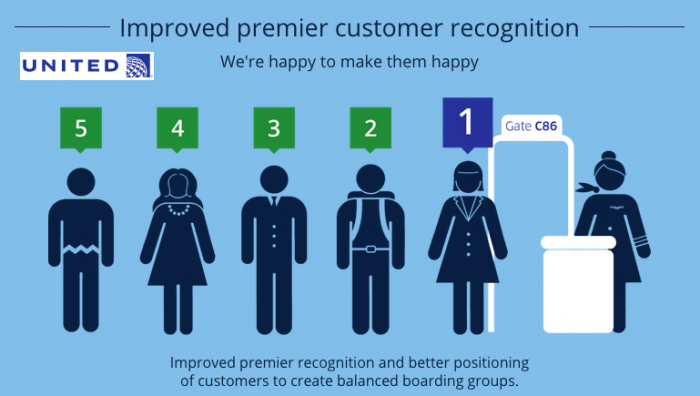 United has changed their boarding process a few times over the years and I find that airlines experiment too much with this sort of thing as frequent changed tend to confuse passengers who simply don’t follow newly written rules to the letter, even though one should think that listening to boarding announcements and counting from 1-5 should be simple enough.

Information about the new boarding process can be found on the United Information Hub (see here).

The feedback from customers and employees was clear: we needed to improve our boarding process. As part of our ongoing efforts to put customers at the center of everything we do, we identified boarding as an opportunity to improve the airport experience. We tested a variety of different boarding processes on hundreds of flights across multiple airports. Best practices emerged from each test, and combined, they now form what we are calling “Better Boarding“.

By reducing the number of boarding lanes, there is more space for customers to enjoy the gate areas, many of which have been completely remodeled with more comfortable seating and in some airports, the ability to have food and drinks from within the airport delivered directly to the gate area.

Essentially they broke the new changes down into 3 bullet points:

In what United calls “simplified gate layout” there are now two sections for passengers: 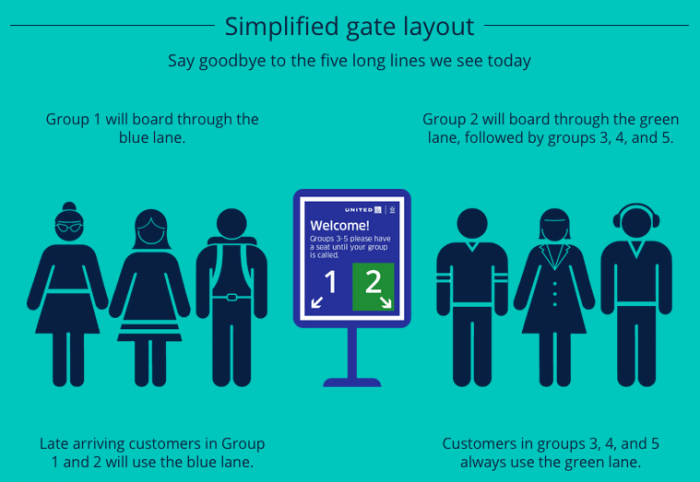 The sign at the boarding area invited Group 1 & Group 2 to board while it prompts all other passengers to remain seated (I can just imagine how well that’s gonna work). There will however still be a pre-boarding for First Class as well as United Global Services/Premier 1K, active military and families with small children under 2 years of age.

Given how broad the pre-boarding already is I seriously wonder if there is anyone left by the time you get to Group 3-5 but let’s set that aside for a while and watch the following informational video that has also been made available:

How exactly does this provide lots of improvement to customers? I can’t see any de-cluttering of the bulk of people hovering around in the boarding area resulting from these renewed set of rules.

My last United boarding for a flight from SFO to Las Vegas was disaster as there was a large group of people from Latin America connecting from another flight with high boarding groups and they choked up the lanes during priority boarding. At that point there is very little the agents can do except letting them on as there is no “Go back to the end of the lane” penalty exit available at these crowded gate areas.

Essentially this is just another mix up of existing boarding rules that will create not much benefit in the daily process to the customer except that Premier Gold & Star Alliance Gold are now in Group 1 which should have been done like this to begin with.

Number one problem is that people simply don’t read or listen to announcements properly and even if they do then this information is simply being ignored and a rush to the gate sets in. Often it’s also caused by people not being able to understand the language in which case all of these efforts are futile as can be seen from my example above.