South China Morning Post was reporting on Saturday that Cathay Pacific had reached an agreement with its flight attendant union to raise the mandatory retirement age from 55 to 60.

Those that wish to stay past 55 years must accept 3% to 9% pay cut and maximum of 75% of applicants are accepted.

Here’s an excerpt from SCMP (access their piece here):

The revised policy would come into effect on January 1 next year. But there would be a “screening” criteria. Under the plan, no more than 75 per cent of applicants who want to delay their retirement age could stay on, and their salaries would be cut by between 3 and 9 per cent.

According to the agreement, the company would open applications every six months, with applicants subject to interviews.

Cabin crew at subsidiary Cathay Dragon, as well as rivals Hong Kong Airlines and its sister carrier Hong Kong Express, must retire at 45. Many other Asian airlines, however, allow cabin crew to continue working at the age of 60 or above.

For example, China Airlines, All Nippon Airways and Philippine Airlines have a retirement age of 65 for their flight attendants. The age limit for Japan Airlines, Korean Air, Malaysia Airlines and Thai Airways is 60, and for Singapore Airlines, it is 62.

Here’s the announcement that flight attendant union posted on their Facebook page: 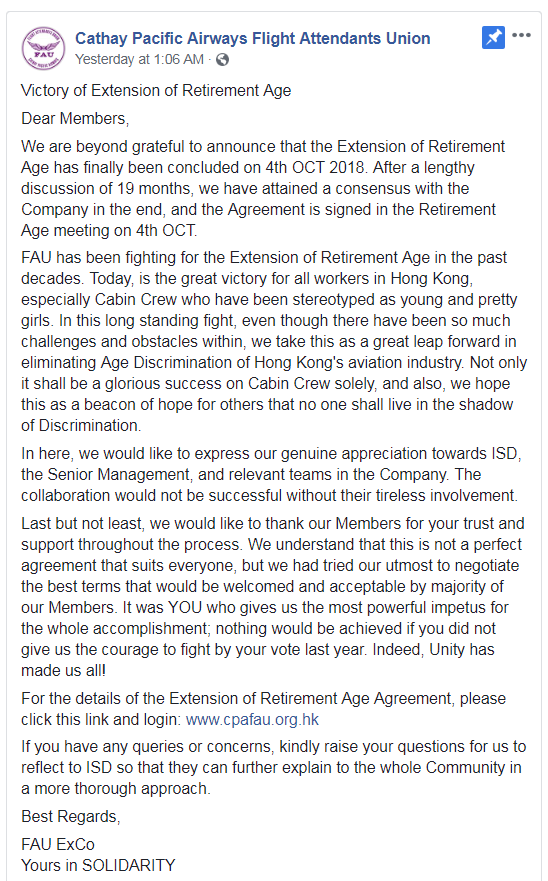 I believe that this was the right decision. The time has passed (or should have by now) when the airlines were selling their products by featuring their flight attendants as “girls”. The life expectancy has improved and most can be productive members of society for much longer than previously.

Most of the losses that Cathay Pacific has made over the past couple of fiscal years are due to fuel hedges at very high prices. They can either go your way or against you.

Airfare of the Day [Premium Economy] CATHAY PACIFIC Singapore to New York from $1,087