There was no dedicated check-in desk for premium economy at Barcelona airport. Instead, it shared desks with the baggage drop for all classes. 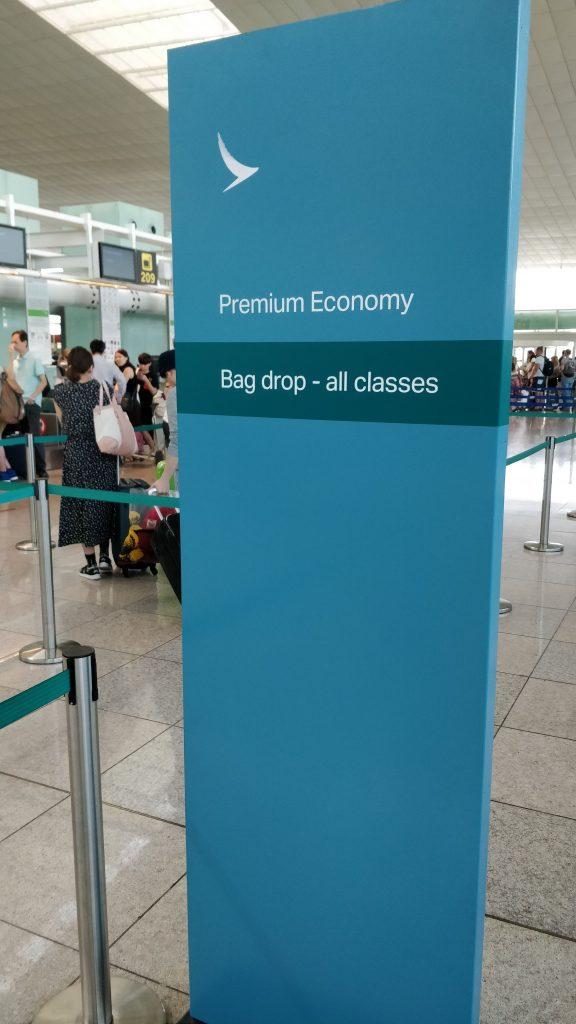 Boarding process was divided on two groups: business class + elite customers first, and then premium economy and economy class passengers together on the second group. 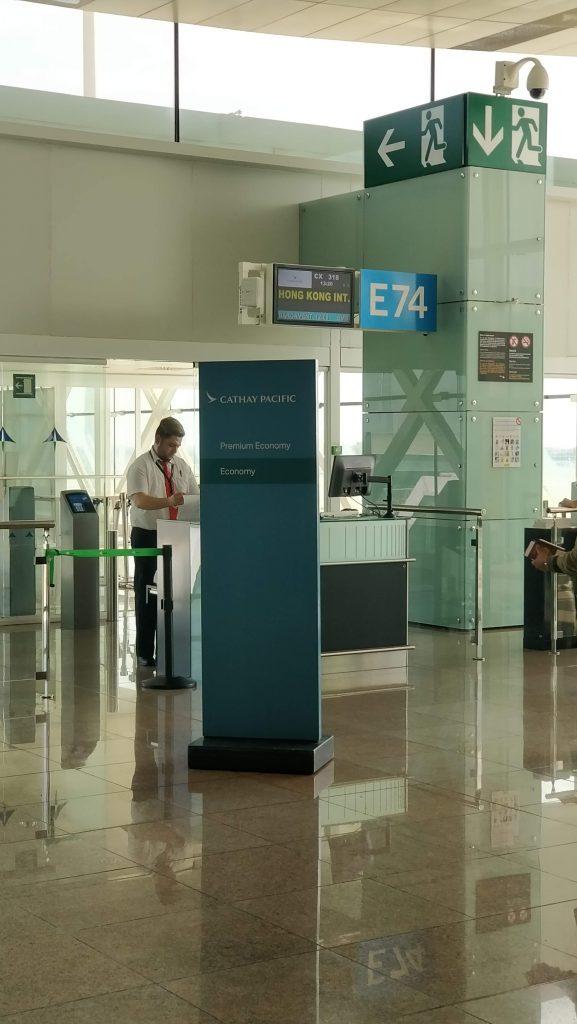 The seat is probably the strongest point of their premium economy product. I found it to be comfortable enough to sleep uninterrupted during my flight. At boarding, both a pillow and blanked set and headphones were placed on the seat. 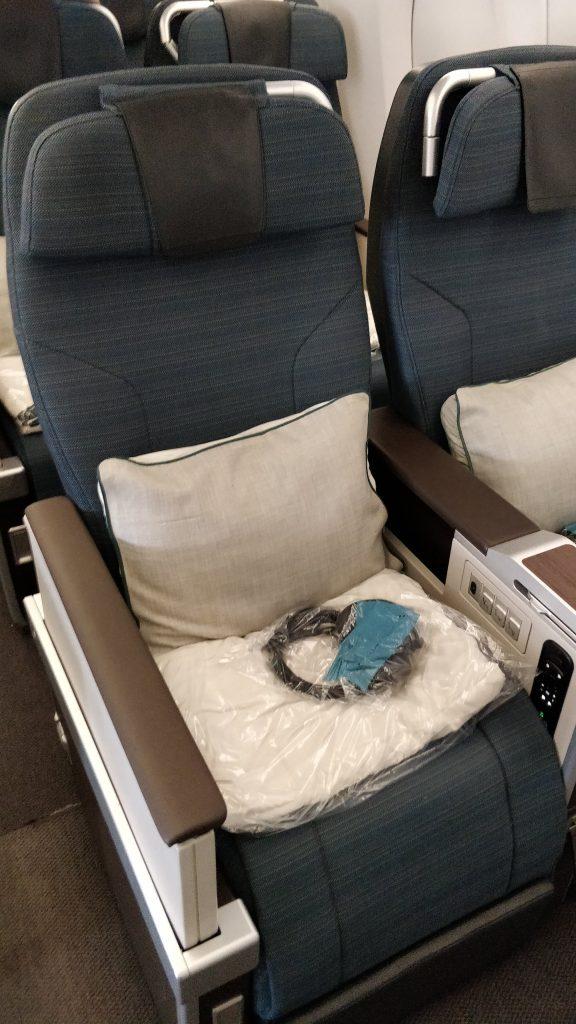 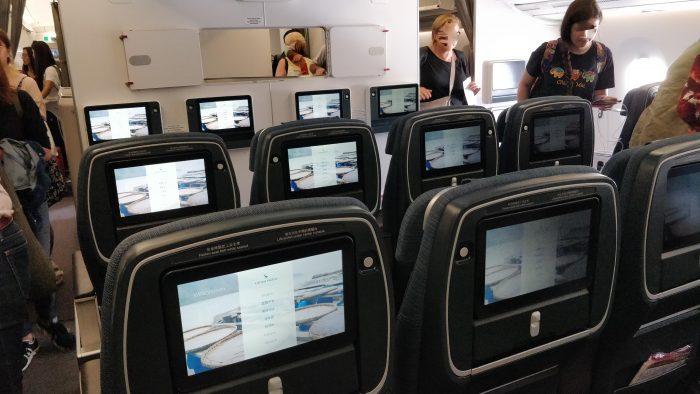 I always have a hard time with flap-style head rests. They’re never firm enough and end up giving up to the weight of my head. That was not the case this time. The head rest was firm and comfortable. The foot rest was also good, with the right level of cushion (as in the seat)).

Airbus offers their Airspace XL bins for cabin luggage storage onboard the A350. These bins offer up to 40% extra storage space if compared with Airbus previous overhead bins. This was the first time I saw these bins and you can tell they’re larger. The hatch comes down to a lower position allowing for extra storage space. 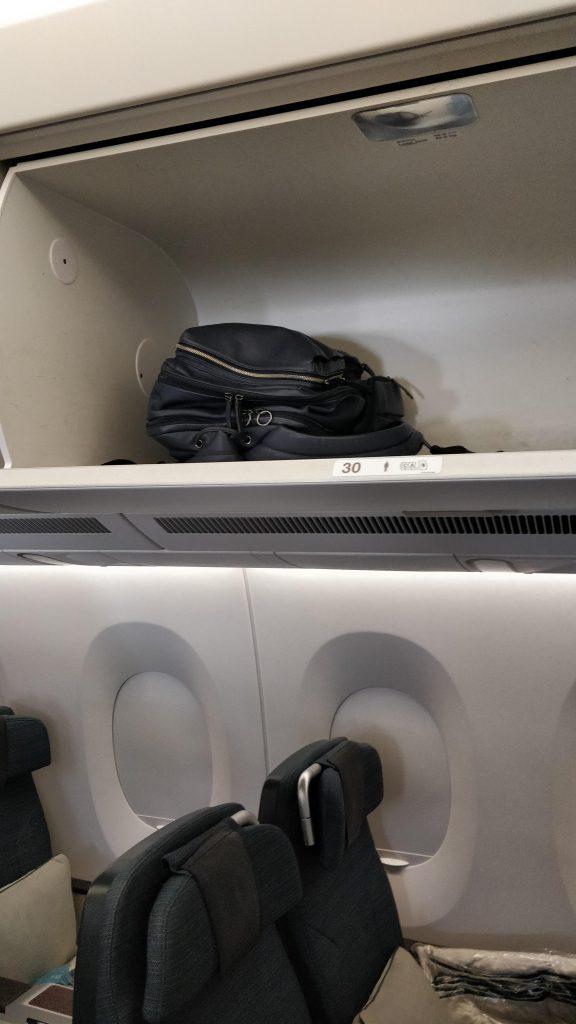 Every seat comes with a reading light and an overhead light. No individual A/C air nozzle though.

I was on a bulkhead seat. Individual screens and crib support were located on the separating wall. 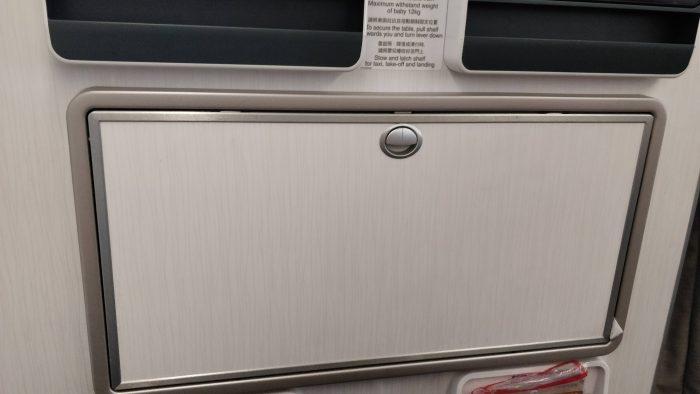 Seat controls were basic: 3 buttons to adjust seat recline, foot rest angle and foot rest extension. In terms of connectivity, the seat offered both a power outlet and a USB port.

In term of trays, the seat featured both a large food tray and a smaller beverage holder tray. The food tray was nice because it was at a higher level than usual, with large space between your legs and the tray. It made a more comfortable dining experience as it is located at a proper height. 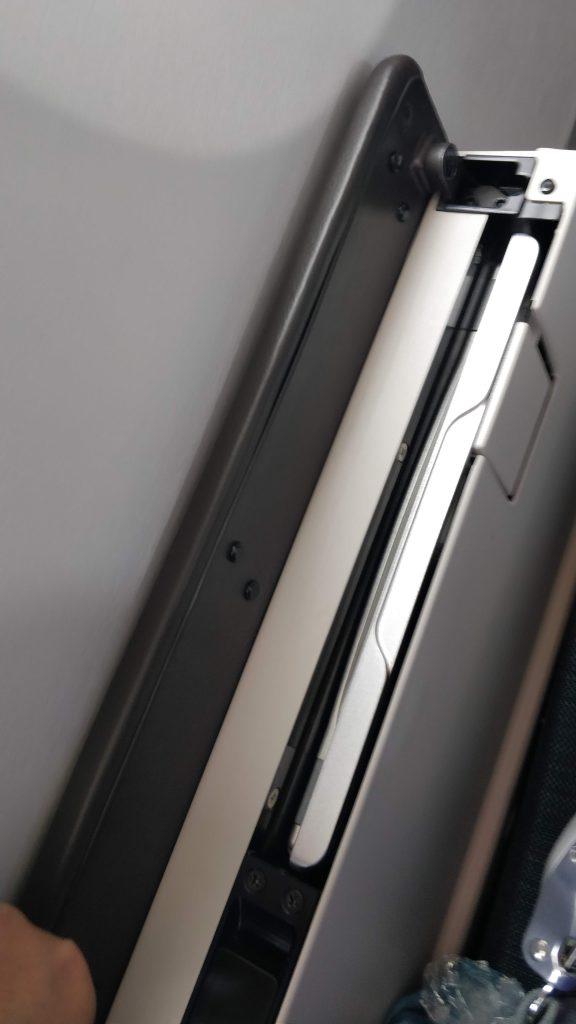 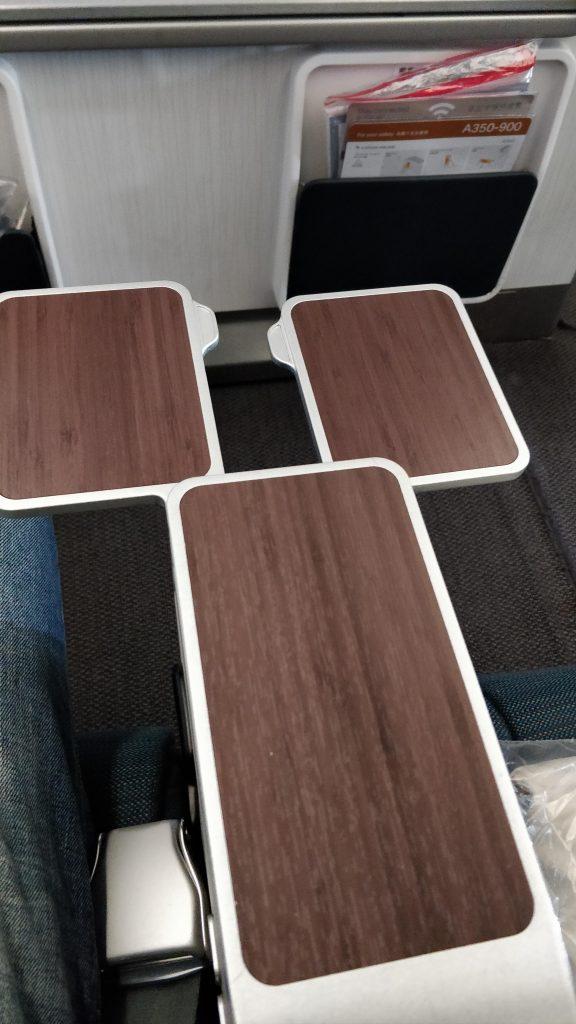 No storage space on the seat besides a pocket in the front wall.

The headphones provided were from a generic brand with Cathay Pacific’s logo printed on them. They were somehow noise-cancelling, which was nice, but they were not close to be Bowers&Wilkins PX headphones. 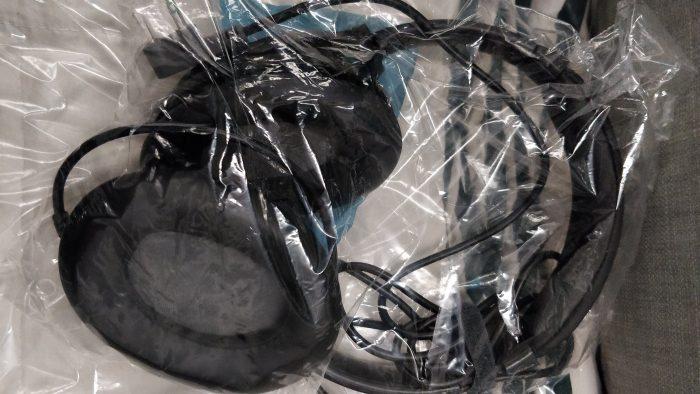 In-flight entertainment is delivered though Cathay Pacific’s StudioCX platform on a sligthly-larger-than-a-tablet individual touch screen. A remote handheld control device is also placed on the seat for IFE control, which comes handy when seating on a bulkhead seat. The movies/TV shows/music selection is large and varied, covering both Asian and western audiences. 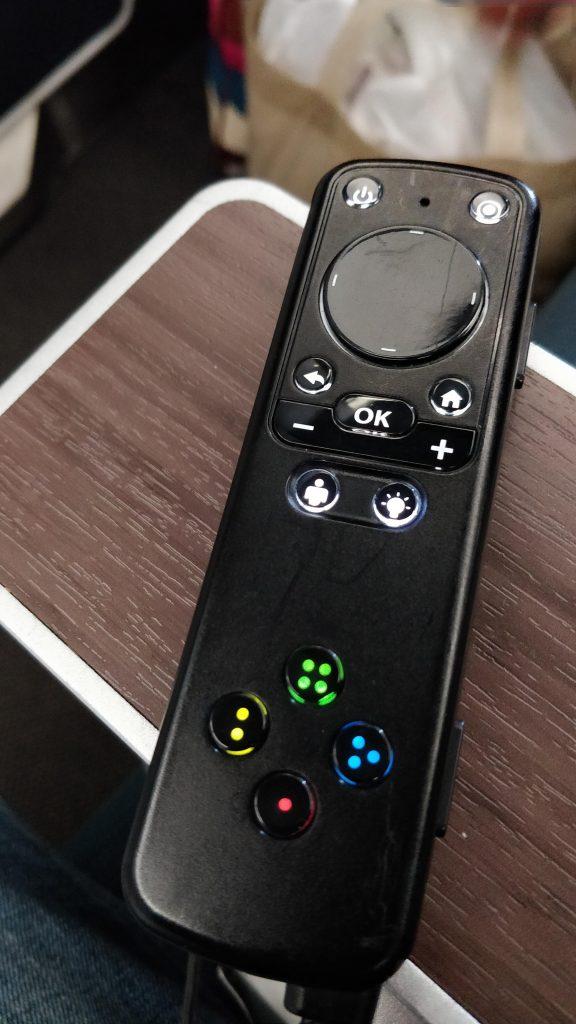 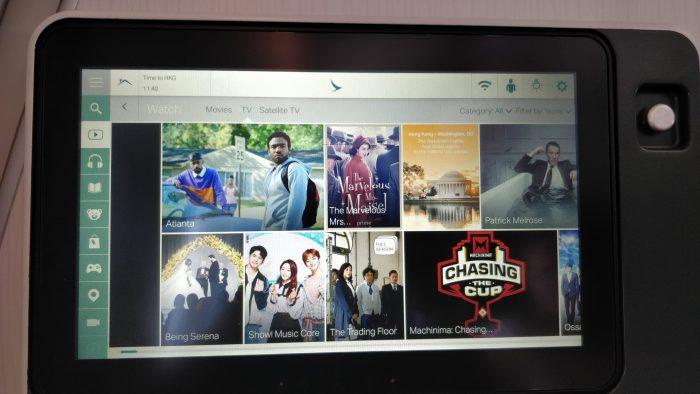 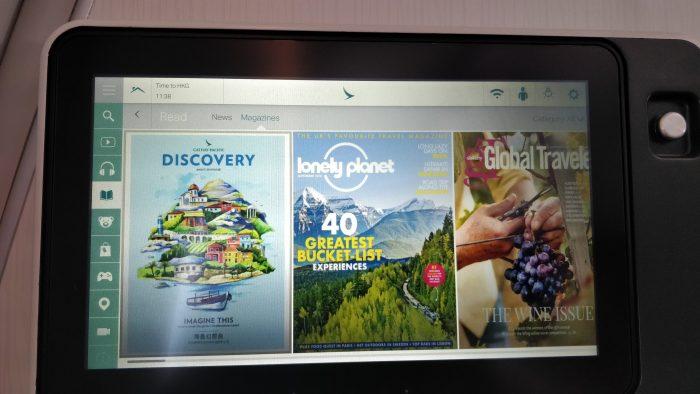 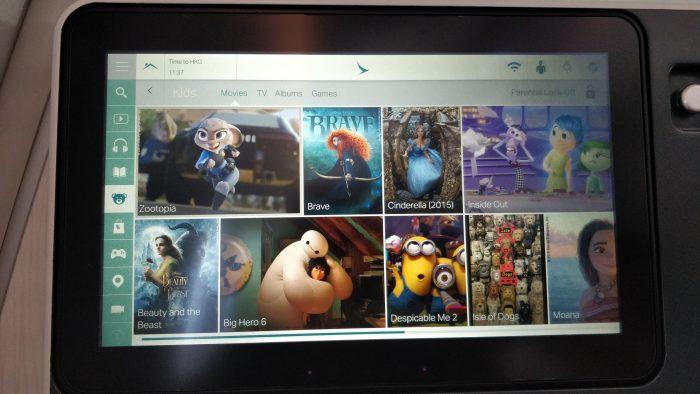 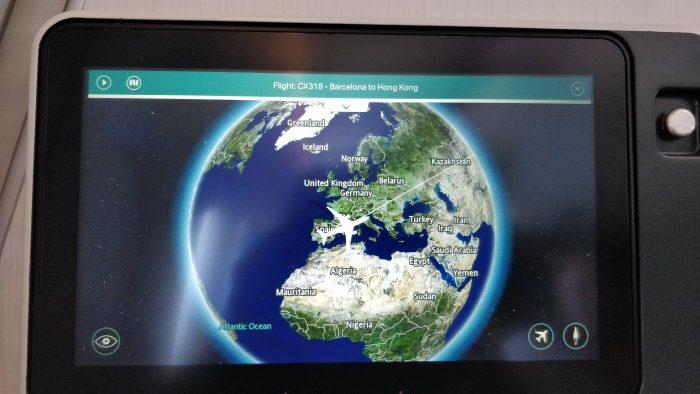 I opted for Solo: A Star Wars Story. Even for a diehard Star Wars fan like me, that was painful to watch. Phantom Menace level. It was the perfect sleep inducer though.

Touted as an “environmental friendly” amenity kit on their website, the amenity kit provided covered the basics: socks, eye shades, earplugs and a dental kit on a crude fabric pouch. 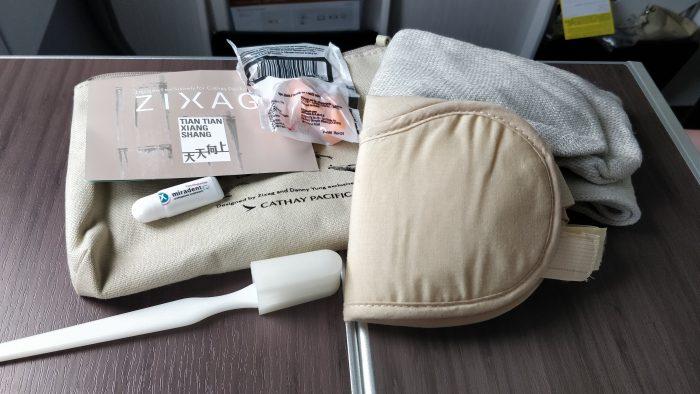 Service started with a pre-departure drink offering consisting of champagne (in a proper glass), and orange juice and water (in plastic cups). 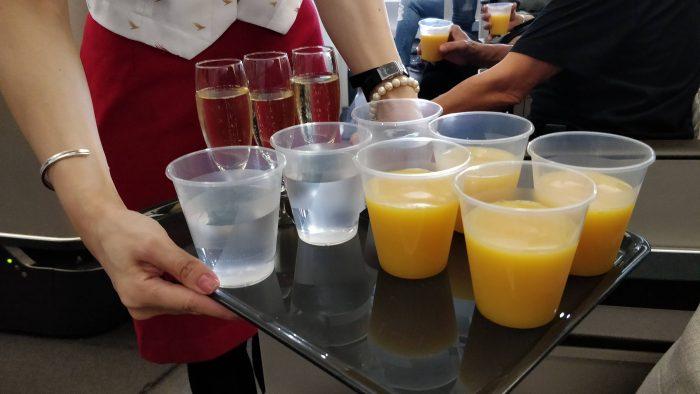 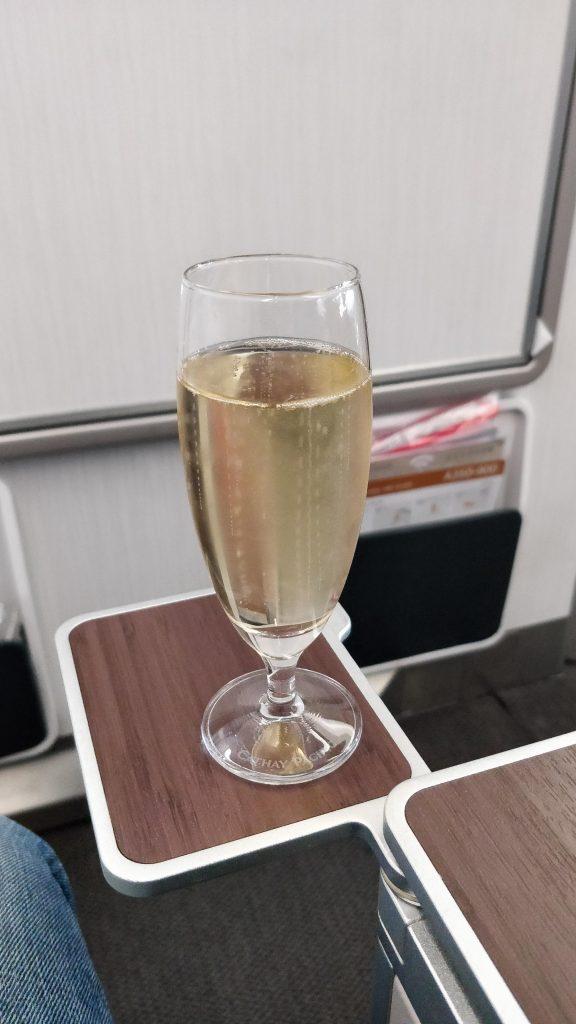 Once in the air, we were first given a bottle of water, our choice of drink and packed nuts. 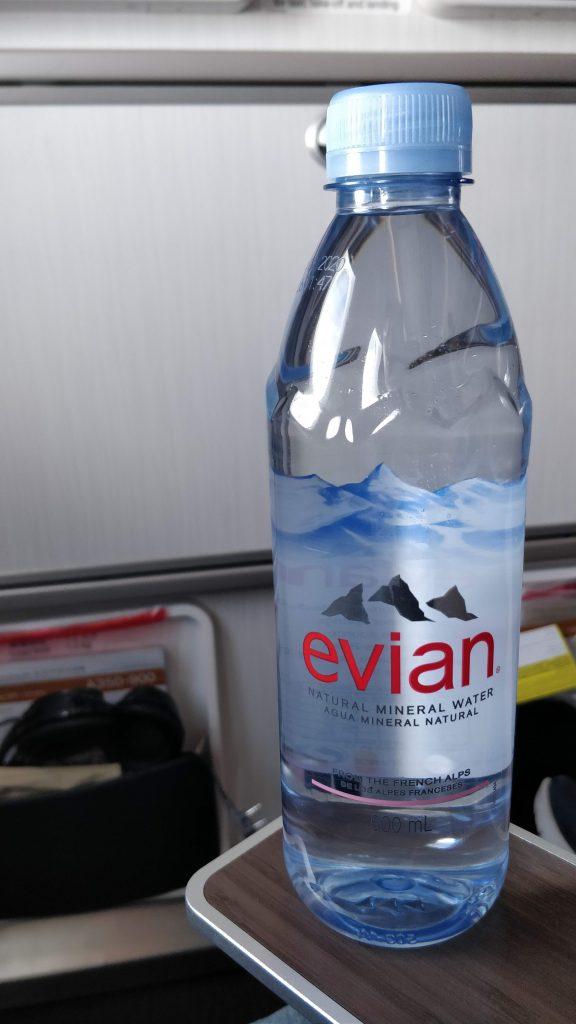 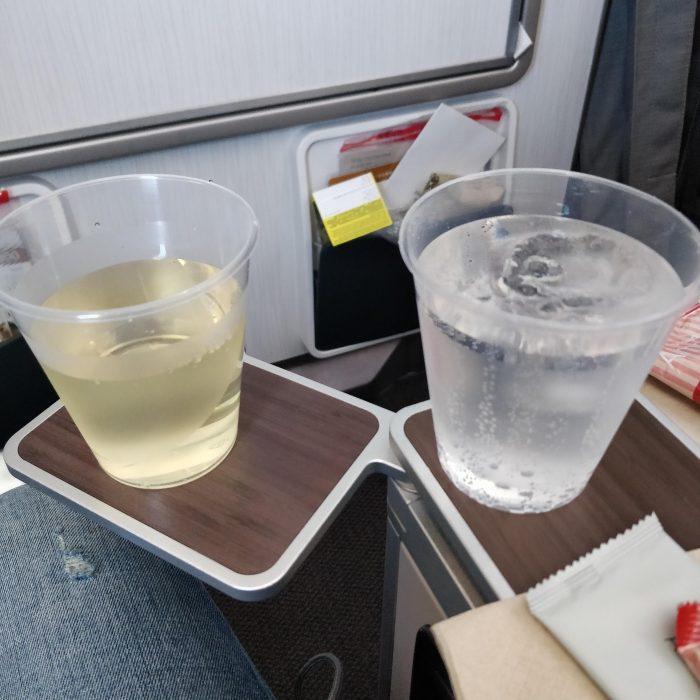 The menu of the day included two choices both for the lunch and the breakfast service. 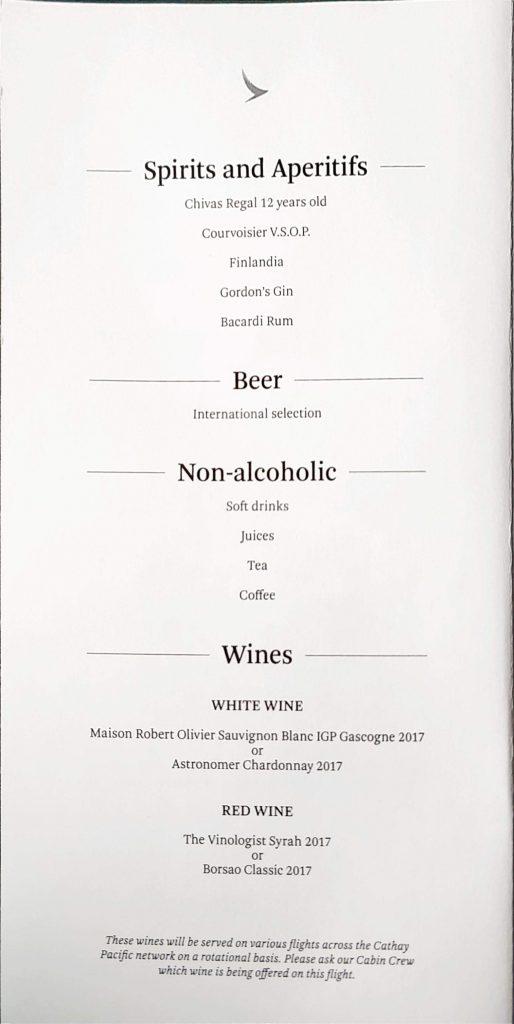 I opted for the beef choice for my lunch. The food was served all at the same time. The main course was served on ceramic dishware. The food was overall tasty. The salad was fresh and the beef was juicy and tender (rara avis in planes, the land of the over-cooked beef). 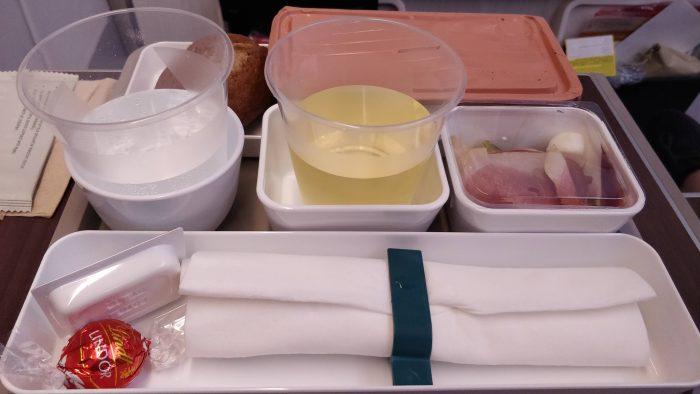 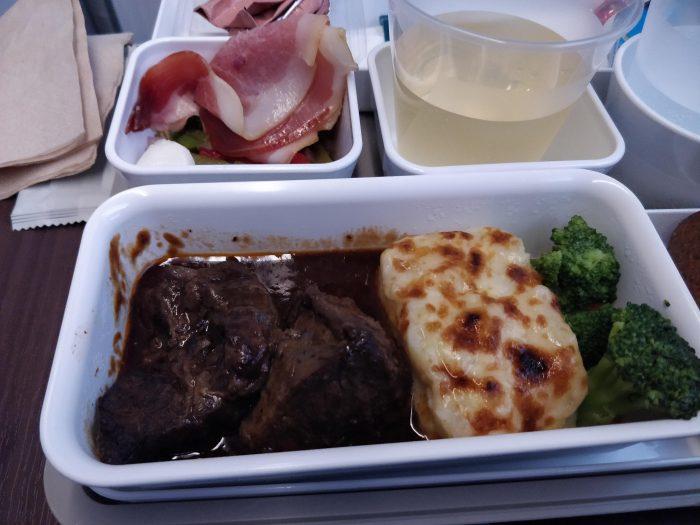 And the breakfast service: 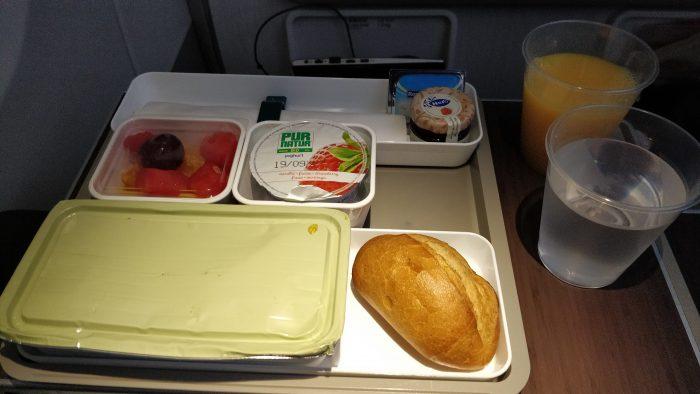 The hard product on this particular plane is their old premium economy seat, which are currently being phased out from these planes (they’ll remain on the A330s though). The main difference (besides space) are the foot and the head rest, not as comfortable as in the A350-900. IFE screen was also smaller. 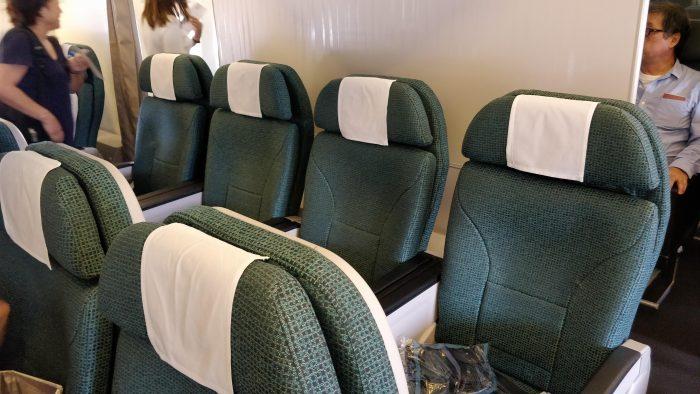 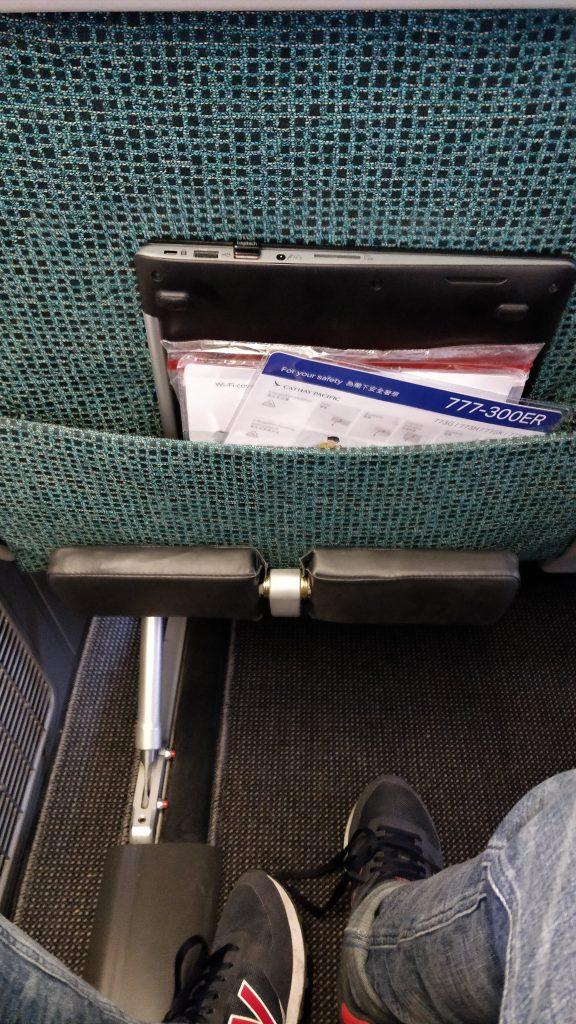 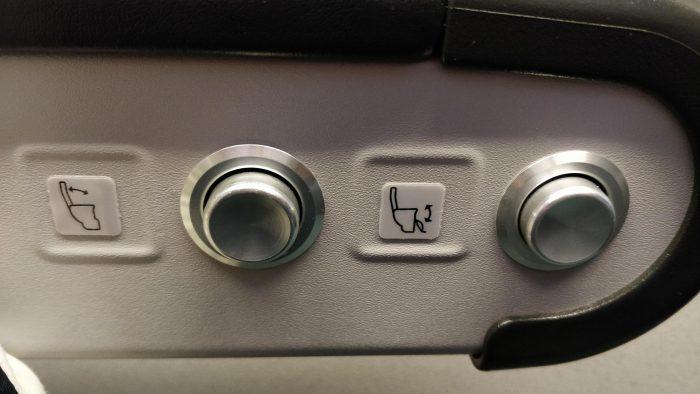 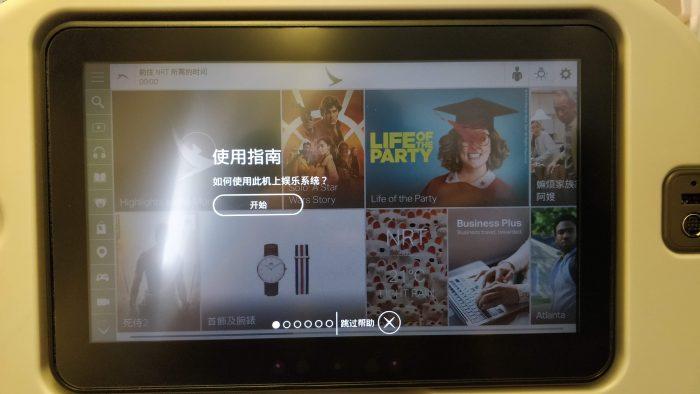 For this midhaul flight there was no printed menu and the meal options were those served in Economy class, The food was good though. There was no amenity kit either or pre-departure drink. 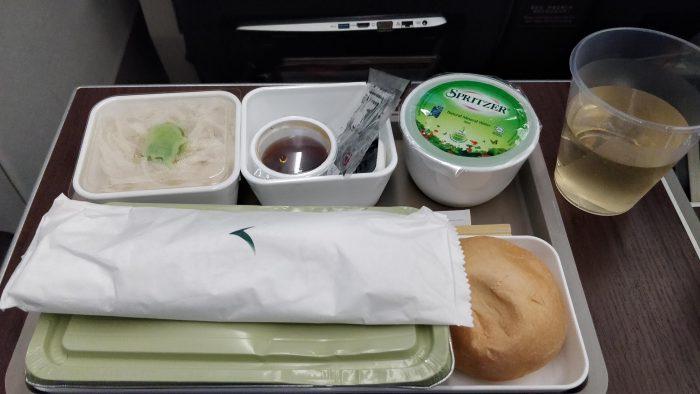 Cathay Pacific offers a solid premium economy product onboard their A350s. The seat is roomy and comfortable, the food and drink service was correct, good selection of in-flight entertainment. At that price point (my ticket was about 1,200€ round trip) is a good option for longhauls Europe – Asia.

Their hard product on the B777-300ERs is old though, and fortunately they’re phasing it off. The seats are not as comfortable. I was glad I had those seats on the short leg, as I hadn’t been able to sleep like I did on the A350.

Cathay Pacific made some changes to its AsiaMiles program effective today that negatively affect some program members. AsiaMiles members can...

Airfare of the Day [Premium Economy] CATHAY PACIFIC Singapore to New York from $1,263

Hong Kong authorities have denied hundreds of work permits to Cathay Pacific pilots and therefore ultimately causing termination of their...