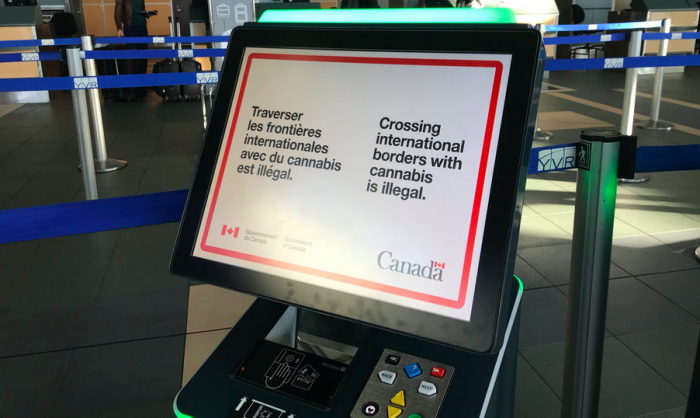 However, airport authorities are warning international passengers not to bring it with them on flights, especially transborder flights to the U.S..

With legislative changes and the legalization of Cannabis in Canada the provinces are now informing people about how to facilitate their rights and that the consumption of cannabis is only permitted in designated areas (at least when it comes to public buildings).

YVR is committed to providing a safe, secure and healthy airport experience for everyone. We provide a smoke- and vape-free environment inside the airport—at all times and for all substances—and have designated smoking and vaping areas outside the terminal building for public use. …

Smoking and vaping of cannabis is permitted on airport property in designated areas only—outside the terminal building in clearly marked areas. Persons smoking or vaping cannabis must use the facilities provided.

It is the responsibility of those passing through YVR to understand and adhere to all applicable local, provincial, federal and international regulations regarding the carriage and possession of cannabis. …

Similar policies are in place for all other Canadian airports at this time and it should be pointed out that one has to be very careful when crossing international borders, especially to the U.S. through the transborder area. 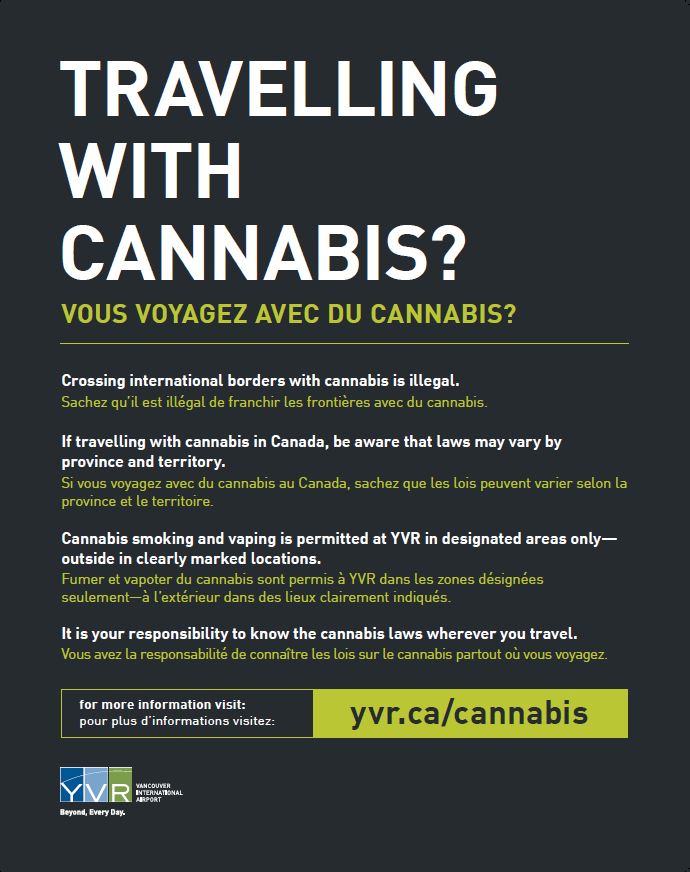 YVR airport is also distributing flyers with respective information for travelers to make sure there won’t be any incident which contravenes local laws and those of a possible destination country.

It should also be noted that one might be asked about the consumption of cannabis and other drugs when entering countries such as the United States. Admitting to the previous consumption of drugs does render one inadmissible to the U.S. which can have widespread consequences not only for this particular trip but also future travel. It’s irrelevant if the consumption of certain drugs is legal in your home country such as Canada or even single U.S. states as immigration & customs regulations don’t take this into account.

If you’re denied entry the customs officer has the right to initiate the cancellation of your visa or visa waiver eligibility which will be a major headache in the future as a new, physical visa is then needed if you want to travel to the U.S. again and it will most likely be denied based on the admission of drug consumption.

Some media articles that had quotes from lawyers suggested that it’s better to refuse answering any question related to drugs and be sent back rather than admitting to any drug offense.

While I’m not a big fan about this new law back home in Canada I think it’s important that people are properly informed how to deal with their consumption and where their rights do or don’t apply. There are also restrictions on smoking in Canada and those obviously pair with smoking marihuana or the popular vaping as well.

Especially when it comes to traveling it’s always a bad idea to be involved in any sort of drug consumption and especially carrying them. This includes certain medication (especially quantities that exceed what one would use during a short trip) in which case a doctors note should always be carried.