It doesn’t seem to be easy time to for Cyprus based airlines. Cyprus Airways went bust in early 2015 and later in the same year new Cypriot airline called Cobalt Air was born. 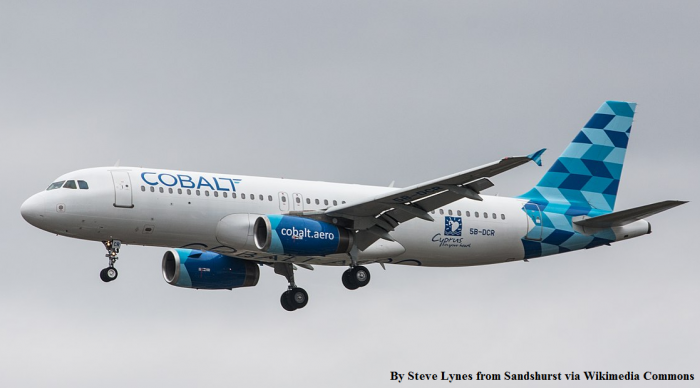 Now, Cobalt Air has ceased all operations as of 23.50PM on October 17, 2018. The airline advises passengers holding confirmed tickets for its flights not to go to the airport as it will not have any staff on hand.

Official announcement by the Ministry of Transport, Communications and Works regarding Cobalt pic.twitter.com/qjU30aNO2q 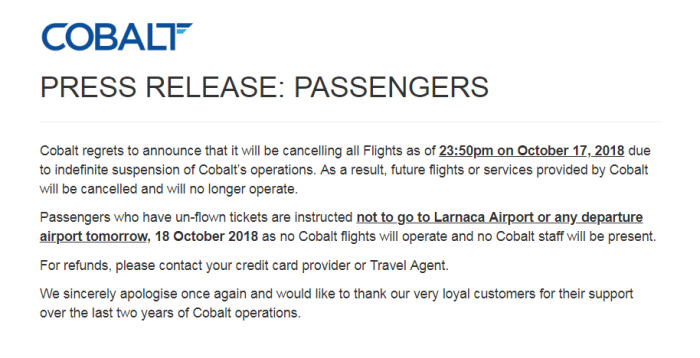 Here’s an excerpt from Cyprus Mail (access their piece here):

Cobalt airlines, the largest Cyprus-based airline, grounded all its flights as of midnight on Wednesday, after reports said that the company failed to reach a deal with a potential European investor.

All flights were cancelled after the last one which arrived at Larnaca airport from Heathrow at 12.20 on Thursday morning.

In early October rumours began circulating that the budget airline was facing cash-flow problems after two of its aircraft were grounded for two days, causing delays to certain flights.

Reportedly, the reason was that Cobalt had not paid the monthly leasing fee to the American company that owns the two planes.

Officially, Cobalt has declined comment. But sources within the company attributed the liquidity problems to a difficulty by Chinese investors to export capital due to Chinese government restrictions.

The airline’s main stockholders are AJ Cyprus, holding 49 per cent of the shares. AJ Cyprus is owned by Chinese Avic Joy Air.

Cobalt Air flew to 23 destinations using six aircraft from Airbus. Seems that the Chinese investor got tired of losses at the airline or run out of cash by themselves.

There cannot be more than few thousands affected passengers due to this bankruptcy and I hope that they used credit cards to pay for the tickets.

Cyprus is mostly leisure destination for the airlines and business must be highly seasonal. Aegean tried to start mini hub in Larnaca after Cyprus Airways collapsed but has mostly retreated on its plans.