Our Whine Wednesday topic this week is about Filthy Aircraft where the cleaning crews of the respective airline obviously did a very foul job which shouldn’t happen especially when departing the home base. 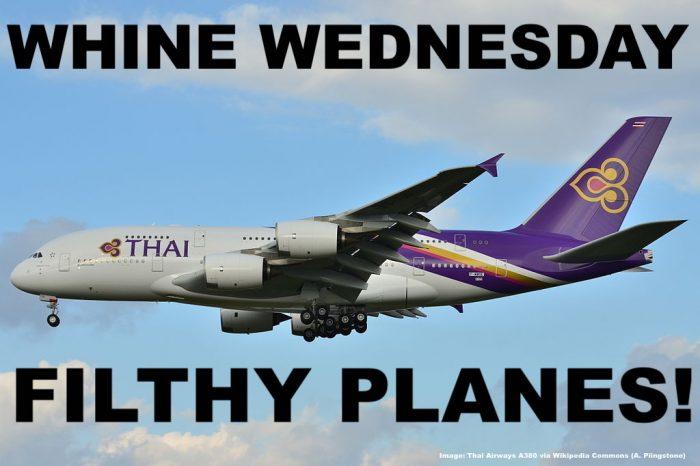 Last week I had a flight from KL via Bangkok and (after a few days stopover) onward to Hong Kong in Business Class and was seriously shocked by the lack of cleanliness.

It’s not always easy to clean a plane thoroughly during a one hour ground stop at a foreign country but would certainly think and expect that an airline should clean their aircraft properly once they are serviced at the home base (in this case Bangkok).

The flight from Bangkok to Hong Kong was operated by a Boeing 777 with the single seat Business Class configuration but the cleanliness of the plane left everything to be desired:

The window also had a filthy smear on it that was hard to capture on camera but it was definitely disgusting.

It really shouldn’t be too much to ask that the responsible cleaning staff wipes off the surfaces, especially those that are obviously dirty and require even the use of cleaning spray to get the dirt off. The panel above shows some liquid (beverage?) that ran down the table. Once the plane touched down in Bangkok this should have been detected and rectified.

In the last few weeks I read a newspaper article that headrests and seat back pockets are the dirtiest spots in an airplane cabin based on germs but that didn’t address the problem of the most basic form of cleaning which is often not done properly or even attempted in the first place.

Cleanliness issues are a universal problem irrespective of the class of service. In my opinion an Economy Class customer deserved a clean seat just as well as someone sitting in First and Business Class. There might be a service discrepancy but no compromise should be allowed when it comes to cleanliness.