With the final step of the implementation of the federal ‘Real ID Act‘ in the United States, travelers with standard drivers licenses issued by various U.S. states might soon require another ID document if they wish to fly domestically.

Individuals can also upgrade their current ID / Drivers License to the new REAL ID which comes with a designation on it while non compliant ID’s include the notion “Federal Limits Apply”.

This entire matter will really become an issue from January 1st 2020 from which day on travelers will require a RealID or a passport (among a few other accepted documents).

After these rules come into effect, which as per DHS is supposed to happen no sooner than 2016 (see DHS statement here) travelers with drivers licenses from these four states will require a passport or alternate form of federal ID as outlined on the TSA Website (see here).

Acceptable Identification apart from the non-excluded drivers licenses / ID’s include:

Let’s assume individuals with these ‘unsuitable’ drivers licenses won’t replace them with something secure they would then have to apply for a passport and carry it around which is a bit inconvenient.

For those not really desiring to do either, the cheapest and most convenient option is probably the Passport Card (see details here) which is a wallet size card just like a drivers license for a fee of 55 US$.

Here is a list of states who currently offer RealID’s exclusively or have been given an extension to do so until 2020: 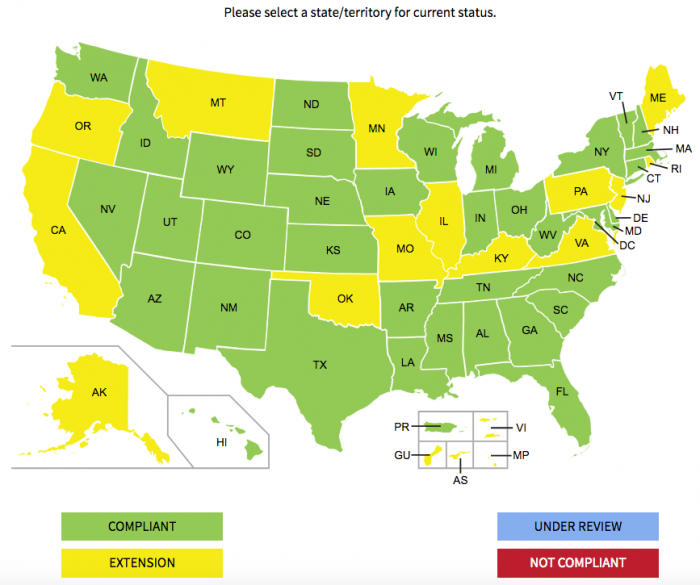 Yesterday I went to a DMV in the Los Angeles area to just get myself a Real ID as a test run and you can actually still apply for ID’s and Drivers Licenses without this feature. Why? Because the RealID requirement is actually quite restrictive and you’re only able to get one if you’re in possession of a Social Security Number (obviously no problem for U.S. citizens) as well as valid Identification which includes as a minimum a valid foreign passport, valid U.S. Visa and most recent I-94 (definitely a problem for individuals with questionable status).

If someone doesn’t have the required documents certain states will still issue ID’s but those will bear the designation “Federal Limits Apply” which also means airport security is a no go. I can imagine this becoming a big mess though as there are likely many folks with “unsuitable” ID’s in the United States.

There is quite a bit of controversy about this RealID Act but in my opinion it’s always good if a country introduces nationwide standards for ID’s that can be used for purposes of entering secure areas or other situations where it’s relevant to be in possession of a proper identification that can’t be altered.