Over the last few months we received one particular Reader Question quite frequently, namely if the 10% award booking discounts that are offered to Chase IHG credit card members and Ambassadors who selected that option can be combined.

You can access IHG’s page for InterContinental Ambassador program here.

I wanted to answer that question based on first hand data points so I waited until I made a reservation at the Intercontinental Grand Parnas in Seoul for 40,000 points and see which of the bonus amounts will post.

Previously I wrote about renewing my Ambassador status and selecting the premium renewal option where one receives 15,000 IHG points and 10% back on all future points redemptions. As this comes with just a tiny US$50 premium it’s really a no brainer to select it over the $150 standard renewal. The 15k points alone will pay for it. 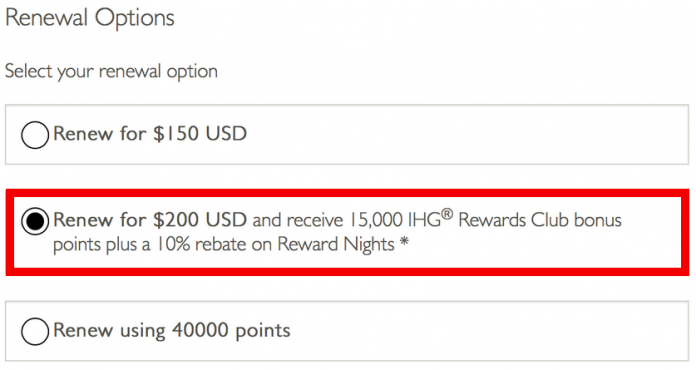 In any case I redeemed that night on September 10th for the night of September 14th exactly two months [and two credit card billing cycles] ago.

When I checked my account today I found that I have indeed received the 10% kickback for both, the IHG Credit Card and also the Ambassador option.

There was also a sub-question one reader asked, namely if you can renew your Ambassador earlier than required and immediately benefit from this 10% bonus.

As I did exactly that and received the bonus this seems to be the case. My renewal is usually up in November but I did renew it in September, made the booking immediately after and now the transaction posts as

despite it being in my “old” membership year but after the early renewal of Ambassador.

If one is able to combine both the 10% refund features IHG Rewards Club can become quite lucrative. In fact a 20% discount can generally be considered a game changer in any loyalty or purchasing transaction. Let’s keep in mind that the IHG card comes at minimal cost and also includes annual Platinum status as well as a free night so in my opinion everyone eligible should have this card at least in his drawer (I rarely use my card due to it’s poor earning rates apart from IHG transactions).

Likewise the $50 it costs extra to get the Ambassador renewal option with 15k points and the 10% award kickback isn’t worth thinking twice about. Even if you value IHG points extremely low the 15k are worth more than $50 not even taking the kickback on future redemptions into account.