According to the (very extensive) storyline his live posts on Instagram prompted MAS officials to contact the inflight crew who then started to pressure Cahill to stop his filming and photography, at some point even refused to serve him any more food and beverage.

This is a pretty bizarre story and it once again involves Malaysia Airlines which I like and hate at the same time for various reasons. I rarely had problems with them in the air, usually all the issues happen on the ground or due to delays but this isn’t about my own experience that were already covered here.

If you’re into airline product reviews that actually focus on the inflight product Josh’s website is a good source for information and since I follow his videos for a while now he doesn’t appear to be a primadonna who complains about small things especially when flying economy which instantly lead me to believe that Malaysia Airlines must have really fouled up here.

Here is basically the rundown of what happened in a Youtube Video from Cahill’s channel:

It comes across as objective in describing the situation. I doubt though that the CEO himself answered his emails. For sure that was one of the case managers or executive assistants.

It pretty much all started with the guys Inflight Entertainment breaking down and receiving a filthy tray with extremely unappetizing breakfast dishes. With nothing to do he whipped out his phone, paid for the Wifi service and started to post on Instagram (the IG has roughly 23,000 followers which isn’t a huge account, in comparison Sam Chui has 220k followers). 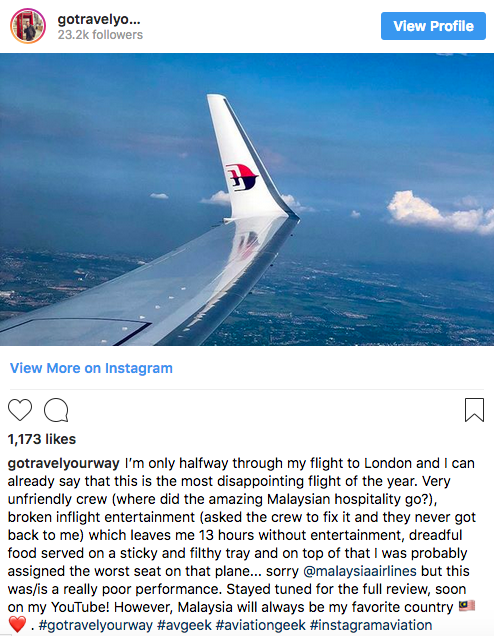 In any case it must have been enough for to catch the attention of someone at Malaysia Airlines who then sent a message to the cockpit. That didn’t sit well with the cabin crew and the cabin manager came to confront Cahill about his postings which was apparently not a pleasant experience. He again posted about this and short after got the following message from someone at Malaysia Airlines:

It’s all described in the video, the best is to watch it as it’s just easier to listen than to read from a secondary source.

The crew then apparently ignored the passenger and didn’t serve anymore drinks including water to him. Also the purser refused to serve any other meal unless he stopped filming which he did for a short while.

Here is where it gets a bit tricky. Even though he had obtained permission to film in advance from the Social Media representative of Malaysia Airlines it’s my understanding that the crew, definitely the captain, has the authority to overrule that. In fact most airlines have it in their Conditions of Carriage that photography and videography on board is not permitted.

For safety reasons, you may not operate on board the aircraft portable recorders, radios, television sets, electronic games, personal cellular telephones or other transmitting devices including remote controlled toys and walkie-talkies. You may not operate any other electronic devices, including compact disc players, laptop computers, audio or video recorders, electric shavers on board without our permission, except for hearing aids and heart pacemakers.

If in our opinion you:

(a) conduct yourself on board the aircraft so as to endanger the aircraft or any person or property on board;

(b) obstruct the crew in the performance of their duties;
(c) fail to comply with any instruction of the crew;
(d) behave in a manner to which other passengers object;
or (e) behave in a manner that causes discomfort, inconvenience, damage, or injury to other passengers or crew, we may take such measures as we deem reasonably necessary to prevent you from continuing such conduct, including restraining you. We may also disembark you and refuse to carry you further, and you may be prosecuted for offences committed on board the aircraft.

These paragraphs are of course extremely flexible to be interpreted and that’s the obvious intention of the carrier. In other words you have to completely follow what the crew says or you run danger of being somehow punished for non-compliance.

Following this incident there was some email correspondence including with the Malaysia Airlines new CEO’s office and eventually Cahill was offered a refund for his flight which he refused and instead asked MH to donate the money to one of their supported charities which they refused.

I kind of get Malaysia Airlines here. There is simply no process in place to divert compensation money to the customer to a charitable cause. It’s an accounting problem and MAB is a huge company. Maybe he should accept the refund, get the payment and then donate it himself if that’s his intend otherwise I can’t see this going forward.

When Malaysia Airlines refunds passengers cash money as compensation they ask to sign a very restrictive form of indemnity which also includes a confidentiality clause so that could be a problem as well. I have dealt with this form a couple times before on several occasions.

The Star one of the largest news outlets in Malaysia also featured the story but it was deleted from their channels short thereafter (at the pressure of Malaysia Airlines?). The same story has however been taken over beforehand by secondary outlets including MSN News (access here) where it is still live.

The passenger, Josh Cahill, who runs a travel and aviation blog GoTravelYourWay, detailed the experience of his 14-hour flight from Kuala Lumpur to London in a 20-minute video uploaded on YouTube.

He claimed that the experience was bad from the moment he stepped on the plane, where the crew were “extremely unfriendly” and that there was “not a single smile” in the cabin.

The story should be identical to what has been published by The Star before where the story has been pulled for obscure reasons. Suppressing this story won’t make it go away, it just gives more material to report on and talk about it.

Josh had previously posted a very positive review of Malaysia Airlines regional product so this wasn’t a one off but in any case it was definitely a bad experience. To end this entire affair he should accept the refund and use the money however he deems appropriate as long as he strikes out the confidentiality clause (obviously hard to comply with that at this point).

Experience with Malaysia Airlines can be extremely hit and miss. Also let’s keep in mind that this was an Economy Class flight which nevertheless means that the passenger still is entitled to a working Inflight Entertainment and a clean tray with edible food.