A LoyaltyLobby reader sent us an email about unfortunate experience at the China Eastern check in at the Shanghai Pudong airport. 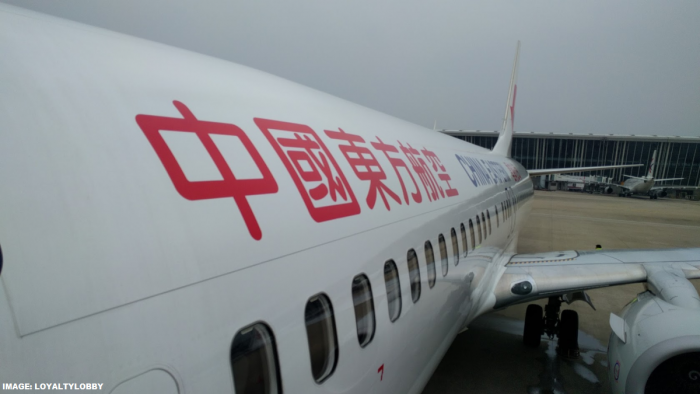 I was due to travel with two of my colleagues on MU 287 (China Eastern) from Shanghai Pudong Airport bound for Okinawa (OKA) on 25th November.

Unfortunately, one of my travel companions got delayed on her way to her airport and only reached MU’s check in counter five minutes before it closed.

She had with her a printout of her boarding pass from prior online check-in, but despite making the counter deadline of 1210pm (our flight was due to take off at 1pm, boarding gates opened at 1215pm), ground staff told her she wouldn’t be able to make the flight. She only had one carry-on baggage that did not require checking in, and her boarding gate was located right in front of security check and immigration. Shanghai airport rules state that security checks must be completed 45 minutes before flight takeoff, so she had ample time before the boarding gate closed at 1240pm.

Ground staff flatly refused her appeals despite her clearly stating that she had a printed boarding pass and instead hustled her to the central information counter where she was harassed into buying a ridiculously expensive air ticket (approx. 850 USD) for another flight operated by a different airline (Juneyao Airlines) that was to fly at 1500 hrs that same day.

To add insult to injury, the ground staff who showed her the way from Pudong T1 to T2 for her Junyao flight demanded 200 yuan (approx. 30 USD) as an escort fee. She purchased the ticket at 1220pm, which was barely five minutes after boarding began. Wouldn’t it have been a lot faster if they issued her boarding pass and ensured that she made it to the gate on time? (FYI the plane pushed back at 1255pm.)

On my end, I made repeated requests for check in counter staff, boarding gate staff and FAs to page for my travel companion but they barely did anything for me. A check with the boarding gate confirmed that my travel companion was on the passenger list, which suggests that the airport counter cleared her for boarding but ground staff did not ensure that she was properly accounted for.

When my travel companion safely reached Naha, Okinawa, she showed me the receipt for her Juneyao flight and I realized that the receipt was issued by a travel agent and not Juneyao Airlines as I would have expected in this instance.

In the worst possible scenario I am suspecting some kind of systematic collusion between the ground staff and the travel agent. I would like for my experience to be made known to China Eastern Airlines, and I would deeply appreciate any form of advice on how I should go about this, and if I have a shot at all.

Not sure exactly what kind “printout of the boarding pass” the passenger had? If it was a boarding pass, she could have just proceed to the gate without having to stop at the counter. Sometimes these are not real boarding passes but only indications that you are going to check in for the flight at the airport (usually due to document check).

I tried to find out what is the China Eastern’s international check in cut off time in Shanghai but couldn’t. These are often 60 minutes before scheduled departure time but can often be less especially in Asia. Also, there is often no hard cut off time for someone without checked bags.

In Shanghai, however, there does appear to be requirement to pass or enter the security check 40 or 45 minutes before the scheduled departure time. Not sure how feasible this would have been to the passenger in question.

It is not uncommon for the airlines to have an agent to issue tickets at the airport. I would, however, make sure that the price is not marked up. I would request an eticket receipt from the Juneyao Airlines to see if this is the case (the price on the airline’s eticket matches what the passenger paid to the agent). The last minute ticket prices tend to be high.

I would assume that it will be an uphill battle with China Eastern unless passenger has everything documented well that:

1. The counter was still open for the flight in question (flight not closed for check in)

2. The passenger could have passed the security

The best course of action probably would be to get government agency involved (consumer ombudsman). Not sure where the person in question is based.