Taipei’s In-Town Check-in at Taipei Main Station is now available for a new set of airlines including Air Asia, Cathay Pacific & Cathay Dragon complementing a set of airlines that initially started to offer the service.

After check-in passengers can use the Metro to reach Taoyuan Airport and go directly to security and their departure gates though certain services and flights are excluded.

In Town check-in facilities are very useful to circumvent long lines at the airport, especially for Economy Class passengers without status who don’t have access to shorter priority counters that save a lot of time.

A good example for this is Hong Kong where one can get the boarding pass very quickly and drop off the luggage before catching the train.

Taipei has implemented a similar system in late 2017 and the first airlines that allowed passengers to check in were China Airlines(CI) ,Mandrain Airlines(AE),EVA Airways(BR) and Uni Air(B7).

You have to follow this process when utilizing the downtown Check-in in Taipei: 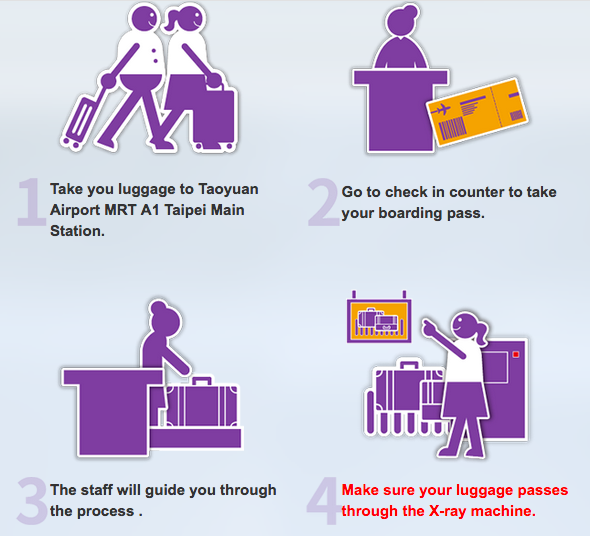 The amount of services and airlines are limited as special security checks for departures such as to Canada can not be conducted at the station as well as passengers who require to gate check a wheelchair and unaccompanied minors.

In case of irregular operations and ticketing inquiries one has to repair to the airport counters as this notice on the Taoyuan Airport website says:

Because of automatized NO-MANNED services, Cathay Pacific Airways(CX), Cathay Dragon Airways(KA), AirAsia(D7,AK,Z2,FD) only provide self-check-in and self-baggage-drop at A1 station and accept luggage only, misc items such as carton, umbrella, backpack(soft bag), baby carriages are not accepted for self-baggage-drop. For other services, please proceed to your airlines` counters at Taoyuan International Airport.

There is no ticket counter at A1 station so rebooking & cancellation services are unavailable; However, excess luggage charging service of China Airlines(CI) ,Mandrain Airlines(AE),EVA Airways(BR),Uni Air(B7) is available. After checking in your baggage, please go to the airport to pay for it, and then you can get your boarding pass. {There is no excess luggage charging service of Cathay Pacific Airways(CX), Cathay Dragon Airways(KA), AirAsia(D7,AK,Z2,FD) at A1 station}.

Basically any sort of extra service isn’t available and that forces passengers to take of their entire check-in process at the airport following the metro train ride.

For ticketing inquiries it’s the same issue. One could see if the relevant airline has a ticket office available Songshan Airport in case a ticketing matter needs to be resolved in person. China Airlines appears to be the only major carrier that still has an in town office in Taipei, these so called City Ticket Offices (CTO’s) have often been discontinued by many airlines to cut costs. There are often sales offices but without counter service in various cities throughout the world.

I’ve taken the Taipei Airport Train (Metro) twice and figured I don’t save much time compared to the Citi Air Bus that I usually like to use when staying at W or Grand Hyatt Taipei.

As far as the in town check-in is concerned I guess I would be ok because I rarely ever check baggage and have access to the priority lineup so that’s usually quick. I can recommend in town check-in especially to folks who otherwise have to deal with the Economy Class lineups. There is rarely any congestion at the downtown check-in. 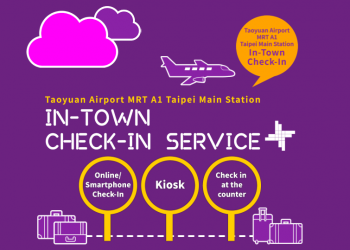