Today we have a very interesting Reader Question as we received an email saying that American Airlines is making calls to question passengers who recently received sponsored flight upgrades. 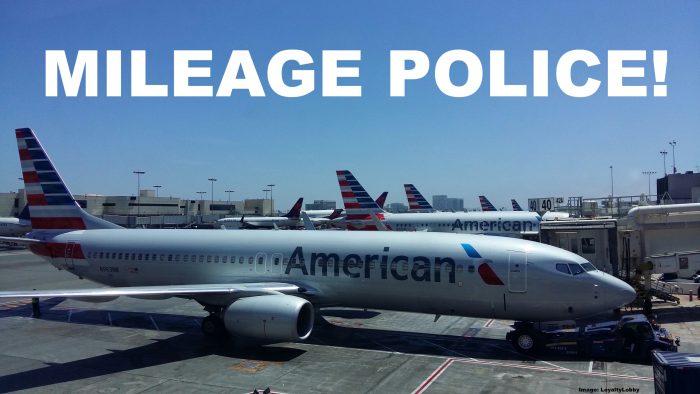 Airlines take fraud quite seriously and have dedicated department to seek out fraudulent transaction within their loyalty programs, daily operations and revenue department which sometimes sets them on a collision course with their customers.

Our reader Charles wrote me an email saying he was perplexed when he got a call from American Airlines this week where they questioned him about the background of his upgrade for an upcoming flight to Europe.

Hi guys, just received the weirdest call from American interrogating me about my flight to London later this month and how I got my upgrade to Business Class.

A few weeks ago I mentioned my trip to a co-worker who does quite a bit of traveling and is one of American Airlines status members that apparently get free upgrades. He offered to upgrade my wife and I to business class using his certificates which he said would otherwise expire. He did NOT ask for any payment and neither did any money change hands. I’m planning to take him out for a nice dinner though or maybe get him a gift card from Ruth Chris for his kind gesture.

All got confirmed and American called me up. The person didn’t properly identify herself and the call even came from an unknown number, there were several missed calls from such numbers as well so clearly the person was unwilling to leave a voicemail. It almost sounded like fraud but the lady knew all about my reservation so I answered as above, saying a colleague offered it as he said his certificates would expire and he didn’t ask for anything in return. She then thanked me and that was it.

Did I (or he) do anything wrong? I felt extremely uncomfortable being interrogated about my trip and now worry we might have problems at the airport. Any help is much appreciated!

Even though I have heard of airlines chasing up account holder of frequent flyer accounts before I never heard anything even remotely about them calling passenger who got mileage bookings or upgrades.

The short answer is: No, you as the passenger didn’t do anything wrong! The account holder on the other hand *might* have a pattern where he often books awards and upgrades for other people and maybe American suspects him of selling his miles/upgrades for cash which is expressively forbidden under their rules and can lead to the termination of the account as well as the forfeiture of all miles and upgrades in it.

I would definitely let your colleague know immediately that you have received this call. Only he known what he usually does with his miles and if there is anything that could cause American to go after him. Whatever action he might want to take related to this is then up to him.

Airlines often get suspicious when then encounter a situation with a passenger at the airport who causes a scene and somehow drops that he bought the upgrade which is clearly a loyalty instrument and not for sale. Other times the airlines make test purchases on Ebay and track down who the seller is.

If the airline has strong evidence to support that a member is selling his miles or upgrades they will likely notify that passenger and either put him on probation or they cancel his account with immediate effect. The latter would result in losing all miles, upgrades and also previously issued awards that haven’t yet been used yet.

Your ticket is paid in cash by yourself so the airline has to transport you no matter what, even if that means they would downgrade you back to Economy. And often times the carrier doesn’t confront the passenger until they actually arrive at the airport so I’d definitely arrive on time and even do online check-in the day before to see if there is any problem in the process.

The bottom line is: Upgrades and mileage awards are not allowed to be sold and even exchanges (against gifts) can be looked upon negatively. People should definitely stay away from purchasing (and selling) any of their loyalty currency on Ebay, Craigslist or frequent flier online platforms as there is always the risk of either an airline is making a test buy or a person you don’t know well doesn’t behave properly and drawing unwanted attention.

Booking tickets and upgrades for someone else is totally fine as long as it’s not a commercial transaction and I do that several times a year. You can upgrades friends, family and even strangers but above mentioned limits apply.

These revenue integrity departments can be pretty harsh and I understand the readers concern about this. He should definitely have a word with his colleague, tell him about the call and ask what he should do. This particular case seems innocent but you don’t know what other dealings the guy had involving his miles and upgrades.

Whenever someone asks you how you received the upgrade the answer should ALWAYS be that it was a gift from your friend. For any further questions I’d POLITELY ask them to please call the member and inquire further. It doesn’t help anyone and especially not yourself to become confrontational in this situation – the airline holds all the cards here!

American has a history of going after people including chasing down their Lifetime AAirpass members for contract violations in order to cancel their lifetime of free First Class flights which they purchased in the 80’s. I remember two years ago American in Shanghai questioned me about an eVIP upgrade too and even went as far as asking me about how I knew the account holder who happened to be a friend of mine for over ten years and if I knew where he lives, phone Nr etc. After like 40 minutes I was able to check-in and fly in Business Class as confirmed.