A German court has decided that Lufthansa’s conditions of carriage (COC) are partially invalid following a lawsuit over an add collect fee after the passenger deliberately skipped the last segment. 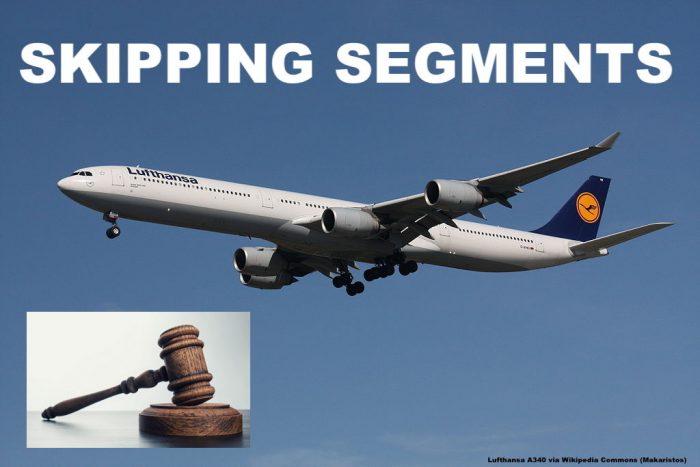 Lufthansa sent the passenger a 2,100 EUR invoice after he decided to forego the flight from Frankfurt to Oslo and initiated a lawsuit after the passenger didn’t pay the invoice as requested.

The customer consulted an attorney and decided to fight this matter as not only was the price difference quite high but also it was the position of the attorneys that the COC Lufthansa had published aren’t exactly reflecting the actual legal situation governing such instances in Germany.

In this case the customer consulted the law firm Franz LLP in Duesseldorf, Germany to handle his case and the attorney was Dr. Matthias Böse.

The customer had purchased a First Class ticket from Oslo to Seattle and back on a return ticket basis. On the return he decided to forfeit the Frankfurt-Oslo segment and purchased a new one way ticket to Berlin instead. Lufthansa saw this as a violation of the COC and ended up suing the passenger for their fantasy pricing of 2,100 EUR after he didn’t pay on the invoice they sent him.

Ultimately the court decided against Lufthansa as the methods used to calculate their penalty price difference and the way this is reconcilable for the customer isn’t in accordance with the law.

Even after pre-trial conference the reaction of the court was decisively against Lufthansa so their attorney attempted to withdraw the case but in Germany you can’t do so anymore at this point unless the defendant agrees. On the advise of his attorneys the customer requested the case to proceed and go to trial in order to obtain a verdict.

We talked to the attorney Dr. Matthias Böse from Franz LLP about this case which – as this is a local court – won’t have any binding precedent towards other, similar cases.

What does this verdict mean for other consumers in a similar situation?

The ruling of the Berlin Mitte Local Court is only binding for the parties involved and is not yet legally binding, as Lufthansa could appeal against it. Nevertheless, the legal direction should be evident: The current conditions of carriage regarding this point are invalid because they are intransparent and do not clearly illustrate the consequences of missing the last segment of a flight for the passenger.

Would Lufthansa have a legal standing when suing other customers in the same position as the defenant in this case?

I assume that Lufthansa will be very cautious in enforcing such claims against passengers again in the future.

We have cited a large number of reasons, each of which, taken on its own, would result in Lufthansa’s supplementary claim clause being legally ineffective.

The fact that Lufthansa was not interested in a decision that was negative for its business was shown by the fact that a withdrawal of the action was declared after the oral hearing. However, as my client wanted clarification, he did not agree to this withdrawal.

Is there any advise Lufthansa customers could follow who entertain the thought of booking tickets with the airline, including those premium fares from other European destinations?

Generally spoken, those passengers who book flights with online travel agencies should continue to enjoy advantages regarding Lufthansa’s Terms and Conditions in the future as well, since there is no or only insufficient inclusion of conditions of carriage in contracts across a broad front.

Thanks to Dr. Böse for his comments concerning this matter!

If you have a case in Germany that requires professional legal aid (especially against airlines) I have included the website of Franz LLP above.

Lufthansa is one of these airlines that likes to enforce the rules when it benefits them but then when the law goes against them they try to weasel out. Good for the passenger in this case that he had the stomach to sit it out and actually demand that the case goes to trial. Companies try to avoid getting a verdict against themselves which could serve as precedent or at least reference for other parties in similar situations.

I wouldn’t totally exclude the possibility that LH still goes after passengers and tries their luck even though they were just defeated at court. Unless there will be a binding decision from a higher court at some point I can totally see Lufthansa continuing this practice, just for intimidation alone. Of course such cases make the rounds quickly and serve as a deterrent.