Our weekly Compensation Clinic case stems from a stay I had last week at the Crowne Plaza Hotel Nuernberger Strasse in Berlin, Germany where some flooding took place in the bathroom. 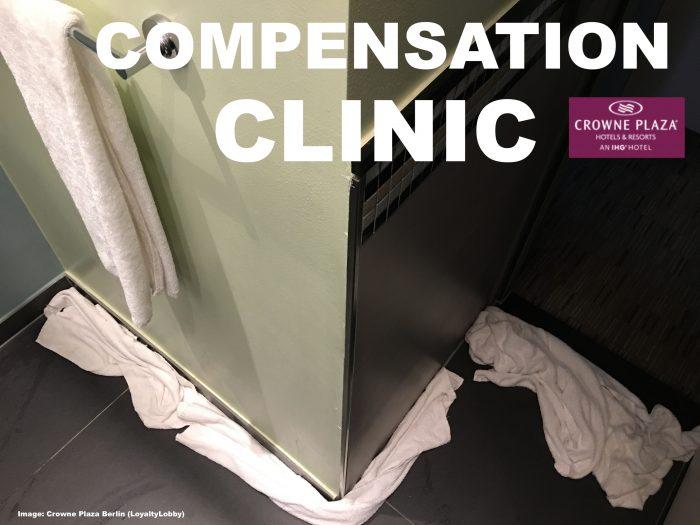 Berlin has a large selection of hotels including many of the IHG portfolio and since I planned to stay in the Kurfuerstendamm area it was most practical to book an IHG property for this purpose as there are three in the immediate area (Indigo, Crowne Plaza and Intercontinental).

The price for the Crowne Plaza Nuernberger Strasse was very low, just about 70 Euro per night, so I decided to stay here as it’s centrally located right opposite the KaDeWe shopping mall and in walking distance to the Christmas Market as well.

Unfortunately there must have been some defect in the bathroom as the entire floor was flooded when I came back at night. I used some towels to mop up most of the water and create a barrier so the water doesn’t enter the main bedroom. The rooms are rather small at this property and the only Platinum upgrade was to a higher floor where the “Executive Rooms” are located however my room didn’t include any breakfast, lounge or any other benefit apart from being on a higher floor.

I complained about the water leak later on to the staff who didn’t appear to be all that interested. Eventually (apart from waiving a coffee I charged to my room earlier that day) they offered me 5,000 IHG Rewards points as compensation which I declined and asked for the General Manager to get in touch. He did send me a text message later on asking me to contact the Duty Manager which I did when returning to the hotel to pick up my stored baggage.

We weren’t able to agree on any compensation at this point and unfortunately I booked this stay as a prepaid rate so the room charge has already been paid.

The next day the hotel credited 10,000 points to my account without further commentary:

Not sure why they can’t at least drop a short email to the guest to advise him what they did especially since it’s a somewhat appropriate compensation given that one night at the Crowne Plaza costs 25,000 points.

While 10k points are nice such a small amount of IHG points aren’t really worth a lot. I leave it at this and likely won’t come back to this particular property as it feels somewhat strange and there are plenty of other hotel options in Berlin which is a very competitive environment for the hospitality industry.

The compensation is fair as it represents roughly half of the room rate in value both in points or the assigned value in cash.