Thousands of passengers have missed their flights at Frankfurt Airport today as security checkpoints weren’t able to process people efficiently and channel them through to the departure gates.

According to Lufthansa at least 3000 passengers missed their flights due to not being able to clear security in a timely manner while a minimum of 88 flights were delayed as baggage of missing passengers had to be offloaded.

German airports continue to make new again for all the wrong reasons and once again the security checkpoints are the reason (as so often this year) causing massive delays and even missed flights.

According to airport management company Fraport (see their website here) passengers are asked to come to the airport at least 3 hours prior to departure and to check in carry on luggage to make the flow at security faster.

Apparently that didn’t help as the airport was in complete meltdown mode today and surprisingly enough not a word of apology or even an update on Fraports Twitter or website.

German news channel n-tv (access here – in German) wrote that 3000+ people missed flights with Germany’s Lufthansa due to inadequate security check procedures causing a total of at least 88 departure delays as baggage of no-show passengers had to be offloaded again.

According to the news article linked above many passengers stood in line for more than 90 minutes causing them to miss their flights. Lufthansa management has criticized Fraport harshly and said there are obvious and grave quality issues at Frankfurt Airport.

Even now there are still plenty of people in the public and secure areas of the airport waiting for re-booking to alternate flights. 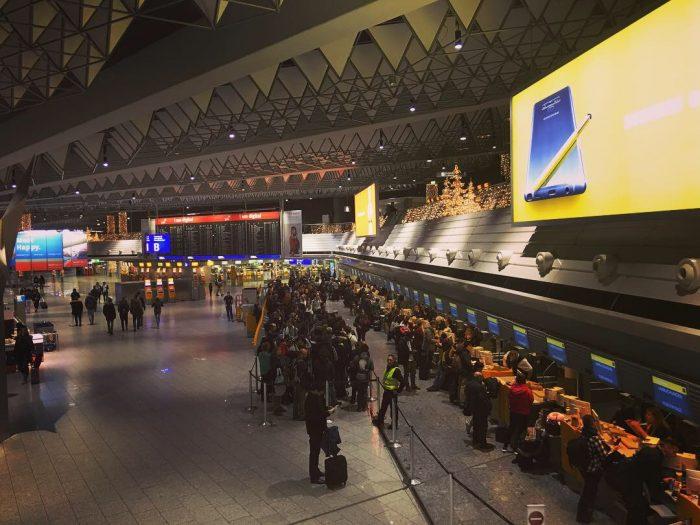 These pictures above were taken by myself and the situation is just horrible. In fact Frankfurt Airport is starting to become a disgrace for airports in general as they are terribly unprepared for anything that deviates from average passenger volume or weather. As soon as a single snow flake falls it’s armageddon at FRA and peak travel days are apparently too much as well now.

The security checkpoints work at a snail’s speed with employees being rude, ill-trained and especially way too slow in processing the passengers.

Earlier this year a security checkpoint employee let a group of passengers enter the secure area after a positive explosives test causing the evacuation of the entire terminal. Back then Terminal 1 section A has been closed down / cleared for 3 hours and as a result 60 flights were cancelled and even more delayed.

It’s unclear who can be made liable for missed flights due to inadequate security checkpoints. Currently there are cases before the courts that stem from the situations in Frankfurt and Munich this summer but no decisions have been handed down yet. One can try and claim EC261/2004 compensation with the airline who can then regulate it with Fraport but I’d think the airline will refuse to pay and deny any responsibility.

It’s time that the managers of Fraport wake up and make some drastic changes in terms of facilities and staff. The airport is an absolute embarrassment which I noticed immediately after landing from Asia last week. Broken escalators, open ceilings paired with a bad performance rate compared to other modern airports is a clear sign that something is very wrong at Frankfurt Airport.

Later this week I’ll be flying from there again but this time Terminal 2. Let’s see what surprises will be waiting this time as Iberia also leaves from the Schengen gates with a central security opposite to the non-Schengen gates at T2 where security takes place at the gates.

Why Did A Hong Kong Man Spend More Than Three Months at HKIA’s Terminal “Transiting” To Vietnam?