Financial Times yesterday had a big read about the “winter blues” that many European weaker airlines are facing during the fourth quarter when the revenues are down but bills still need to be paid. 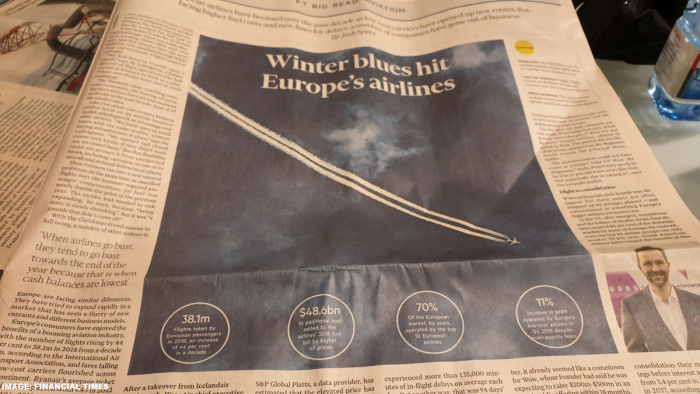 The newspaper article noted the airlines that went to bankruptcy last year; Monarch, Airberlin and Alitalia of which only the last one is still operating while trying to find itself a new owner. There are several smaller casualties this year such as Primera. Recently FlyBe put itself up for sale and Wow Air almost collapsed.

The high price of jet fuel is a recurrent factor in recent bankruptcies. Although the price has recently fallen back to around $75 a barrel, it has spent most of this year between $80 and $90 and came close to $100 in early October. Eighteen months earlier, it had been as low as $50. S&P Global Platts, a data provider, has estimated that the elevated price has added $48.6bn to airlines’ 2018 fuel bill, compared with last year.

Airlines have also cited the cost of new European compensation regulations for passengers as a factor. Jozsef Varadi, chief executive of Hungary-based Wizz Air, now one of Europe’s “big six” airlines, says the “squeeze in the marketplace” comes from both fuel costs and the new compensation system. “Those who are not viable from a financial standpoint cannot live up to the challenge,” he adds.

The piece also notes the recent “chatter” surrounding the Norwegian that has had its debt load ballooning and doesn’t have much space for hiccups before everything may unravel.

The European aviation market hasn’t gone through the same consolidation as the US where four airlines control 80% of the domestic market by number of seats. They are also more profitable as a result.

If you have access to Financial Times or can find a way around their paywall, the article is worth a read.

I had been wondering for a while what was going on with Alitalia’s restructuring. Seems that the Italian Railways may come to the rescue this time around further prolonging the inevitable.

There has been quite a few pieces as of late about the financial challenges that Norwegian is currently facing. I hope that they can figure out how to fly their network profitably before next downturn or other external shock.