Our Compensation Clinic case this week is about a baggage irregularity I encountered on Lufthansa when flying domestically last week and the airline offered an advance cash payment for emergency purchases. 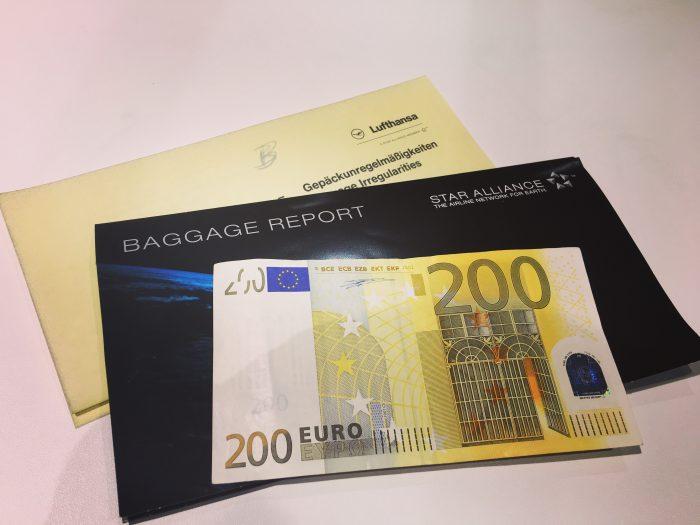 Baggage irregularities happen on occasion and are usually decent about compensating required purchases resulting from baggage delays – with certain exceptions such as the now defunct Air Berlin where baggage cases were always a hopeless case.

It’s been years since I lost my last bag with Lufthansa but last week on my Berlin – Frankfurt flight everything fell apart and the bag which I initially checked in for a then cancelled flight never got rerouted properly.

I filed the baggage claim in Frankfurt after arrival and since I stayed at the Sheraton Airport Hotel for a night decided to press Lufthansa for some emergency purchases as the bag I checked in was already my carry-on that I had to check due to liquid cosmetics etc I purchased in Berlin.

First Lufthansa said I should just bring them the bill for purchases but knowing Lufthansa has the ability to give customers cash in advance I told them that I don’t desire to get involved in endless correspondence again just to regulate a 200-250 EUR purchase of a shirt, sweater and jeans. I didn’t plan to go all out shopping even though I theoretically could have planned that.

The Lufthansa agent then authorized a payout of 200 Euro cash in advance payment without any purchase receipts required.

As there was a good sale at the clothing store upstairs at Terminal 1 I actually did spend most of that money for buying what I told them I would. Obviously I could have also just kept the money entirely not buying anything and nobody would be the wiser.

Lufthansa has the ability to compensate passengers with lost baggage on the spot at almost all destinations worldwide. In Germany this is usually cash. In other countries that can include prepaid gift cards (Visa/Amex/MC) or vouchers.

Also class of service and frequent flyer status comes into play when determining how much the airline will pay out. It ranges from 50 EUR to a non-status Economy Passenger on short haul to 400 EUR for First Class international (I’ve seen an actual chart before in Duesseldorf). In my case it was a cheap Economy domestic ticket and I’m Star Alliance Gold.