From next Monday onward Japan will be charging a departure tax of 1000 Yen which will be charged to each international departure in order to fund tourism related expenses. 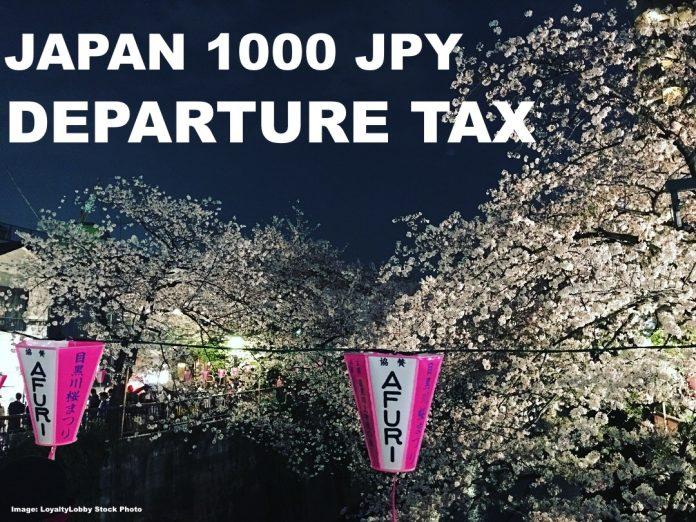 The ‘Sayonara Tax’ for departures will apply to both foreigners and Japanese travelers and incorporated in the ticket charges collected by the airlines similar to the already existing taxes and fees.

This tax will apply to newly issued tickets only and added electronically to all other surcharges so the passenger won’t notice anything apart from the ticket being slightly more expensive which could be for a number of reasons though. Let’s face it, most people don’t look at their fare very detailed.

I previously wrote about this in April (access my article here) and was quite critical of this fee because it’s indiscriminately charged to all passengers not just foreign tourists and business travelers.

As such, ordinary Japanese travelers are being charged as well and since the funds are supposedly being used to promote tourism once could argue why the common citizen should be paying for that. Not like it’s a facility related fee that attributes to airport improvement etc.

Japan will start collecting from next Monday a departure tax of ¥1,000 for each person leaving the country by aircraft or ship regardless of nationality. …

The government plans to utilize the revenue from the tax for measures to accommodate more foreign visitors to the country, develop tourism bases and improve immigration procedures, officials said.

People leaving Japan within 24 hours of their transit entry and children under 2 years old will be exempted from the departure tax.

Those with tickets purchased and issued before Monday will be basically exempted from the tax.

Specifically, the revenue will be used to set up facial recognition gates at airports for speedier immigration procedures, while also promoting the use of multilingual information boards and helping introduce more cashless payment terminals for public transportation. …

It’s not specified if passengers who are transiting on two separate tickets within 24 hours will be able to claim back their prepaid fees in some way. In Hong Kong, passengers who continue on to Macau by ferry for instance are able to refund some relevant fees through a special customer service counter.

I did notice how the official line of how they funds are used has slightly changed from what it was in April. Back then the narrative included a funding project for a casino and several other options that didn’t receive much support among Japanese as many didn’t see the point of their funds being used to rack up a casino.

If you have any tickets to book from Japan and want to save the small fee then maybe you can do it before Monday as from then on the departure fee will be automatically added to all tickets.

To be honest the only real practical way is to charge this fee to all departures irrespective of nationality to avoid passengers having to line up and pay the fee in cash as it was the case in Indonesia or the Philippines for many years. There will also be no retroactive collection of the fee for existing tickets whoever has it booked by Monday gets a free ride.

REMINDER: Hilton Honors Asia-Pacific Up To 35% Off Sale For Stays Through September 30, 2019 (Book By February 2)