The famous, charismatic founder and chairman emeritus of Southwest Airlines, Herb Kelleher has passed away at age 87, leaving behind a legacy that is a true landmark in the U.S. aviation industry. 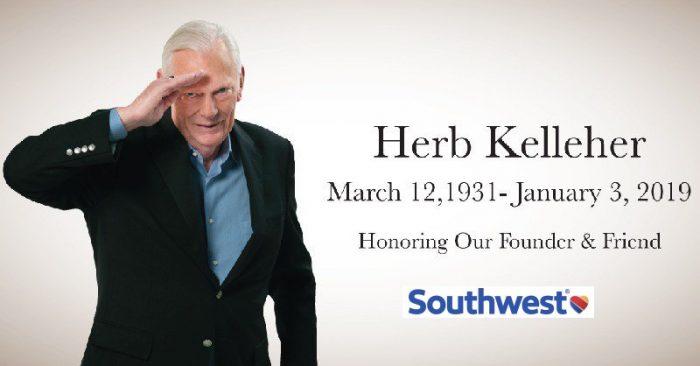 Southwest Air started flying in 1971 and for the past 48 years Herb was the face of the company who actively interacted with customers, even those who were serious complainers.

I first came across the name of Herb Kelleher when I saw an old letter to a customer printed somewhere where he answered a complaint of a customer who wrote repeatedly to the airline and brought forward criticism.

I don’t have the letter in front of me right now but he basically said “it seems we can’t make each other happy so let’s just leave it at that. Farewell, Herb.” which I found was a charming and direct way to essentially fire a customer.

Here is a farewell note from the Southwest Airlines Blog (Out of respect I post it in it’s entirety):

It is with heavy hearts that we share with you that our Founder, Inspiration, Chairman Emeritus, and Friend Herb Kelleher has passed away this morning at the age of 87. Herb is survived by his wife, Joan, three of their four children, many cherished grandchildren, and, of course, his pride and joy, the Employees of Southwest Airlines.

Born Herbert David Kelleher on March 12, 1931, and raised in Haddon Heights, New Jersey, Herb received his bachelor’s degree from Wesleyan and his law degree from New York University. He practiced law on the East Coast before relocating to Texas with plans to start his own law firm. In 1967, Herb and client Rollin King incorporated Air Southwest, Inc., with the idea of offering low-fare, intra-Texas airline service. After a name change and many legal battles valiantly fought and won by Herb, Southwest Airlines took to the skies on June 18, 1971—a date that would change each of our lives forever. Anyone in the world who has set foot on an airplane in the past 50 years has been touched by the life of Herb Kelleher. For he, with the first set of Southwest Warriors, made history when they set out to disrupt the airline industry by making flying both fun and affordable.

As we all know, Herb has played a very profound role in the life of President Emeritus Colleen Barrett. They have been a powerful pair since she became his legal secretary in 1967, and together they nurtured and groomed Southwest Airlines into one of the most admired Companies in the world. Colleen said: “He always supported me and always treated me as his complete equal. His generosity and inclusion from the very beginning allowed me opportunities and experiences that have been my guiding lights.”

Southwest CEO Gary Kelly’s life is another one of the many lives that Herb touched, and he had this to say about his lifelong mentor and friend: “One of the greatest joys of my life has been working alongside Herb for more than 30 years. His stamp on the airline industry cannot be overstated. His vision for making air travel affordable for all revolutionized the industry, and you can still see that transformation taking place today. But his legacy extends far beyond our industry and far beyond the world of entrepreneurship. His true impact can only be accurately measured by the hearts and minds of the People who he inspired, motivated, and engaged on a daily basis. And that, I believe, cannot be measured or quantified—but it is to be admired and appreciated by all who have been fortunate enough to experience it. I consider myself blessed to be one of those People.”

Herb served as Southwest Airlines Executive Chairman from March 1978 to May 2008 and as President and CEO from September 1981 through June 2001. Fortune magazine, which consistently recognizes Southwest among the world¹s top 10 most admired companies, called Kelleher perhaps the Best CEO in America.

Herb was a Freedom Fighter. He revolutionized the skies. He blazed a trail of low fares and exemplary Customer Service in an industry ruled by just the opposite. Herb was a Pioneer. A Maverick. An Innovator. He celebrated and exemplified the esprit de corps of the Southwest People with such vigor that the spirit has grown exponentially. Herb knew all along that “The business of business is People”—yesterday, today, and forever. Herb decided long ago that our internal Customers, our Employees, would come first.

Herb has been quoted as saying, “It is my practice to try to understand how valuable something is by trying to imagine myself without it.” We now have to imagine ourselves without Herb. Our Founding Father has passed on, but the legacy that he has left to each of us is still very much alive. Southwest will grieve as Families do, but we know he’d want us to laugh through our tears.

We miss you already, Herbie.

Nothing else to add to this note. RIP Herb!

Southwest really isn’t my airline but I have respect for someone who built up a company by himself and is actively participating in running it even into old age. Herb Kelleher has certainly done so and will be remember by those in the industry among other big names who revolutionized aviation and domestic air travel.