IAG, the parent of British Airways/Iberia/Aer Lingus, took a stake in Norwegian Air Shuttle last year and tried to explore friendly options to acquire the airline but the major shareholders weren’t too keen to sell.

On Thursday , IAG made an announcement that they would no longer pursue this and would divest their Norwegian Air Shuttle shares in due course. Norwegian shares fell more than 20% as a result.

Here’s the short announcement that IAG made today:

International Airlines Group (IAG) confirms that it does not intend to make an offer for Norwegian Air Shuttle ASA (Norwegian) and that, in due course, it will be selling its 3.93 per cent shareholding in Norwegian. 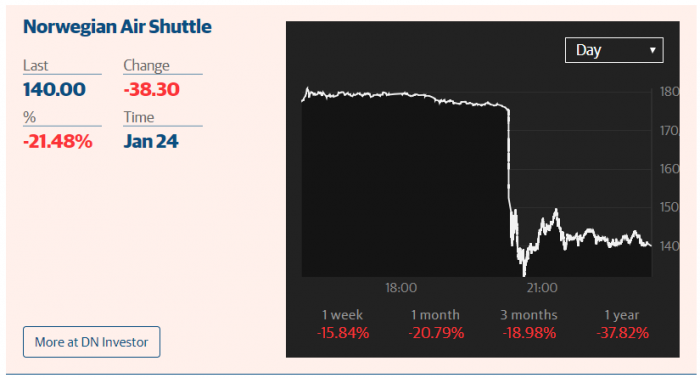 Here’s an excerpt from DN (access their piece here):

– Norwegian is in a terrible demanding financial situation. Therefore, I think today’s reaction shows that there is still hope for a transaction, after all, says Hermanrud.

– I think this is a typical situation where an operator reported their interest while the economic development throughout Europe was good and the planes were well filled. So the situation has changed, and macroeconomic developments are no longer as good. That in itself can be a reason to sell. But there may be other bids, and IAG may well be able to get back on track, he says.

It is likely that Norwegian’s owners need to put up more capital or otherwise the airline will breach loan covenants during the first quarter. The airline is highly leveraged and needs close to perfect execution in order to survive.

These LCC’s have been very successful in point to point flights within Europe and elsewhere. The business model have yet to be proven in transatlantic flights though.