Following United Airlines recent penny pinching measures of no longer sending Mileage Plus Gold members a membership card and blocking award space of several airlines I filed a DOT complaint against United and promptly received a (bogus) answer from them. 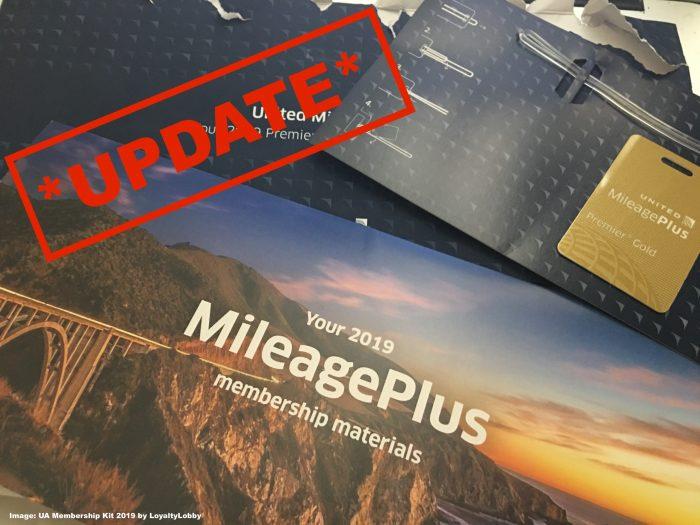 It took less than 24 hours after filing a case with the U.S. Department of Transportation until United replied but unfortunately the answers were total nonsense so I gave them a chance to correct them.

On Monday I wrote about United sending Gold members a membership package containing nothing but a simple, plain luggage tag but no membership card.

John also updated us that United has continued to add other airlines (ANA being the most recent one) to their list of unavailable Star Alliance Award partners, claiming a technical problem.

There was an overwhelming response from out readers and since this behavior from United is pretty outrageous I decided to file a DOT Consumer complaint.

It took less than 24 hours to receive an email from the Executive Services of United Airlines, Corporate Customer Care (UA answers marked in bold):

I am responding to your complaint to the Department of Transportation regarding our MileagePlus program.

Q: It is impossible now to use collected miles for travel on Thai Airways and Singapore Airlines despite this being a clearly advertised program benefit.

A: All award seats are capacity controlled and may not be available on the specific days or flights you want to travel. Full details regarding redemption are available on our website. This is the same on United flights or any of our Star Alliance partners.

2) United stopped sending membership cards to their Mileage Plus Gold Members. This creates lots of problems as airlines within this region do require a physical card to be presented for access to the airline lounge and to use priority benefits. I engaged with United three times and was told they only send cards to their Platinum and 1K members now which is totally unacceptable. Not providing me with a membership card severely limits my ability to use my earned benefits.

A: I’m sorry this is creating a problem for you. Our membership cards are now digital and available to you on the app. This format should not be a problem with our Star Alliance partners.

Obviously these answers were complete bogus and I replied to this email, copying the DOT administrator as well as Oscar Munoz in the address list and requesting further clarification:

To whom it may concern,

I’m responding to your reply to my Department of Transportation complaint as the answers provided are insufficient.

R: This matter has nothing to do with regular capacity control. United currently blocks ALL flights of Thai Airways and Singapore Airlines as well as TAP Air Portugal categorically (this is also described on the website) claiming a technical problems that is going on for longer than a month. The situation is unacceptable and devalues the currency greatly.

A: Unfortunately, due to technical issue is not on the United side, and until further notice we are unable to book award travel on TAP Portgual(TP),

Thai Airways (TG) and Singapore Airlines (SQ). The United system and the other airline systems are not communicating. Customers have been advised and made aware of the situation and we apologize for the inconvenience. Effective February 6, 2019 we will no longer book award travel on these carriers.

b) Mileage Plus Membership Card

R: It DOES create a problem for Star Alliance partners not being able to present a card. I had bad experience so far in Bangkok, Taipei as well as in Frankfurt. There is zero justification to stop sending membership cards without proper announcement of at least one year in advance so members can properly decide if they want to continue collecting miles with the program or not.

It makes even less sense that United sends a membership package around the world containing one single baggage tag. The baggage tag costs as much in material and postage as a proper membership card would.

A: I’m sorry you are unhappy with our digital membership cards. It is in line with our Eco-Friendly initiatives, and we have had positive responses from customers.

I don’t think United is doing themselves any favors with these kind of replies.

A technical issue with currently FIVE blocked Star Alliance Airlines (ANA has since added to the list as well) while they can still be booked with all other programs on the market?

Then a “Green Initiative” that still uses the same amount of plastic material for a useless baggage tag, shipping a huge envelope around the world and requiring the member to use or possibly force to purchase an app supporting mobile phone? Yes, most people probably have a modern phone, but some likely won’t have one and now United is forcing you to download their horrible app.

Do customers or even United executives believe that members are happy when Mileage Plus cuts the card which results in them possibly being denied access to the lounge? There were several reader comments on the last article describing problems that occur when a physical card is missing.

The fact that United feels emboldened enough to provide such ludicrous answers is mind boggling. Mind you this isn’t some offshore customer service agent but the Executive Services department which replies to DOT inquiries. It seems they really feel confident this was the right decision to take and that they don’t have to fix the award availability issue while still selling Mileage Plus miles with one promotion after the other. Don’t buy any if you plan to redeem in the long run or on one of the block affected airlines!