The crash happened a few hours ago, at 08:44 local time on Sunday (March 10th), shortly after take-off from the Ethiopian capital around the town of Bishoftu, which is 60km (37 miles) south-east of Addis.

The aircraft was delivered four months ago and this is the second deadly crash of a Lion Air 737 Max, the first on 29 October 2018 where 189 passengers and crew perished.

BBC reported about the crash an hour ago (access here).

An Ethiopian Airlines Boeing 737 passenger jet has crashed on a flight from Addis Ababa to Nairobi in Kenya.

The flight is believed to have had 149 passengers and eight crew members on board, the airline says. A spokesman said the crash happened at 08.44 local time on Sunday, shortly after take-off from the Ethiopian capital.

In a statement, the airline said that search and rescue operations were under way near the crash site around the town of Bishoftu, which is 60km (37 miles) south-east of the capital.

It did not provide details on the number of casualties. It is not clear what caused the crash. “Ethiopian Airlines staff will be sent to the accident scene and will do everything possible to assist the emergency services,” the statement added.

Boeing, the company that built the aeroplane, said in a tweet that it was “closely monitoring the situation”.

Its 737 Max-8 aircraft is relatively new to the skies, having been launched in 2016. It was added to the Ethiopian Airlines fleet late last year. …

Obviously a very sad and very serious incident – the second crash of a B737 Max within half a year.

It’s possible to track this flight on Flight Stats website: 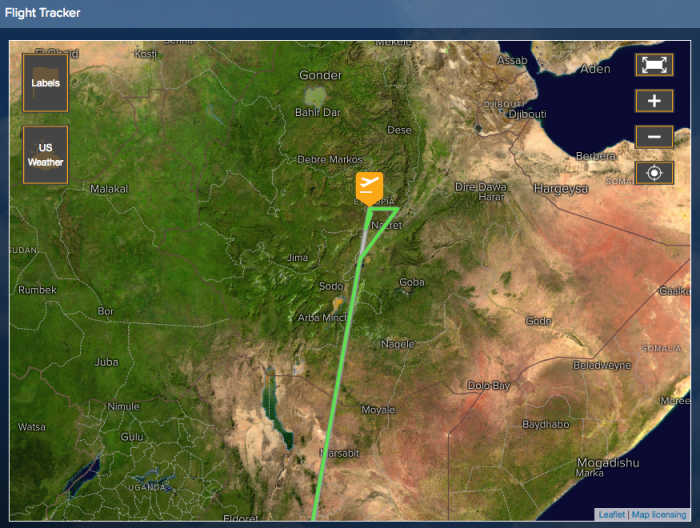 Ethiopian, as a carrier, has a good reputation and is a member of Star Alliance.

The accident will be investigated by local authorities as since it was a Boeing aircraft both the NTSB as well as the manufacturer will also take part in this investigation.

Very little to say at this point other than RIP to all the deceased on board this flight.