In order to drive membership sign-ups Marriott BONVOY is now engaging customers through a Wheel of Fortune raffle in public places such as at Melbourne’s Southern Cross Station this week.

After the disastrous Starwood merger Marriott now not only has a huge amount of brands on their hands they need to market but also a brand new loyalty program in name with pretty much zero recognition.

I’m not surprised at the need to go the extra mile in order to recruit new members and bring them into the hotel loyalty hamster wheel.

One of our readers sent me an email yesterday saying that BONVOY had a promotional campaign at Melbourne’s Kings Cross Station in form of a Wheel of Fortune style raffle and the requirement to participate was to sign up for a BONVOY membership (or show them existing membership).

There were different prizes to win which included dining and spa vouchers as well as “membership card”, whatever that means since Marriott apparently doesn’t send out membership cards anymore.

Our reader won a dining discount voucher for the Sheraton Melbourne: 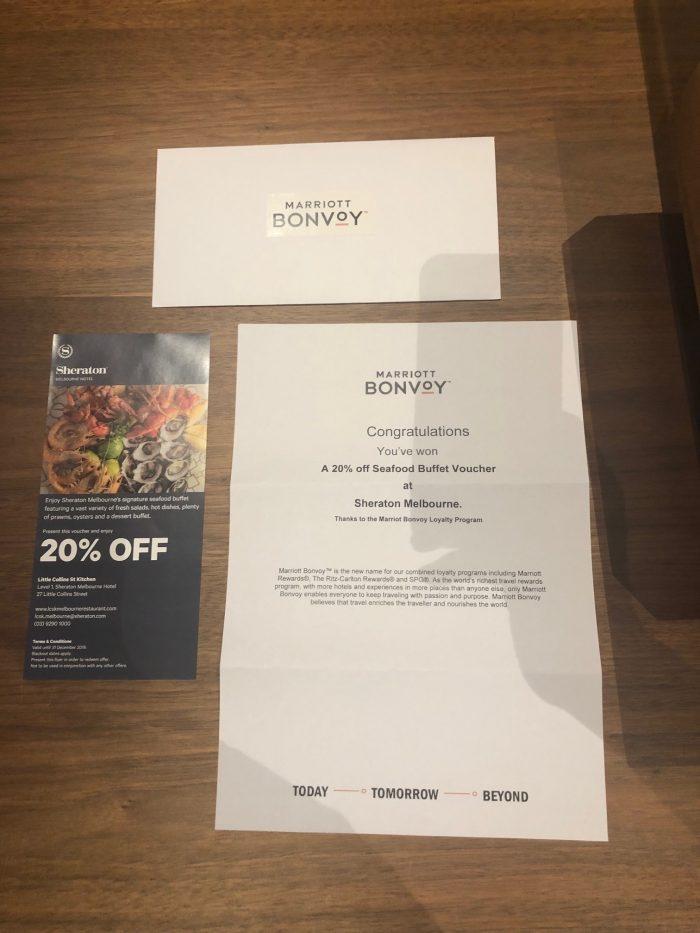 The vouchers are worth a small 20% discount and pretty much just take off the tax and service charge which is levied at pretty much each hotel nowadays.

But the prizes aside I found it interesting that Marriott now goes this route for membership growth. It’s not uncommon for Australia to have such campaigns though. A couple years ago Virgin Australia also had a similar campaign at Westfield Mall in Sydney where they even offered a status match to elite members of competitor’s programs.

Marriott (at least in the short run) will have to fight an uphill battle with their membership recruitment following the bad press they received over the last 9 months or so. Having such a huge brand portfolio is quite difficult as well. Even many existing customers are turned off by them at the moment and the decision to abandon the well recognized Marriott Rewards / SPG names might prove to be a curse.

Have you seen similar promotions elsewhere in the world?

Marriott Bonvoy 25% Off Americas Cyber Sale For Stays Through January 3, 2021 (Book By December 1)