A fire in the Terminal 1 Transborder area of Toronto Person International Airport has shut down terminal operations for both inbound and outbound passengers. 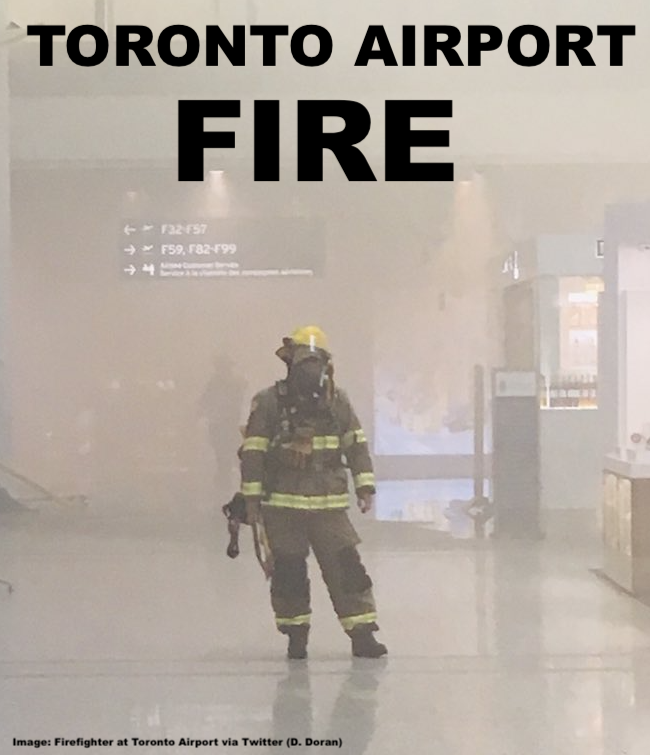 The fire was quickly extinguished but emergency services remained on scene and passengers have been safely evacuated from the terminal building and tarmac.

A fire at Canada’s busiest airport has led to cancellations, delays and several smoke related injuries. The blaze broke out Sunday evening in Terminal 1 at Toronto Pearson International Airport, leading airport authorities to evacuate the terminal and surrounding areas. It was extinguished a short time later, but the airport decided to cancel all flights to the U.S. scheduled to depart from Terminal 1, which caused quite a bit of chaos.

The CBC reported about the situation in Toronto which affected mostly transborder and some international flights.

Hundreds of people have been evacuated following a fire inside terminal one at Toronto’s Pearson International Airport, according to Peel police.

Following the incident, all flights to the U.S. scheduled to depart from terminal one Sunday evening were cancelled, according to the Greater Toronto Airports Authority (GTAA).

Outbound international flights and inbound arrivals were suspended at the terminal, but have since resumed.

Police said the fire was extinguished without any major injuries, but a few patients were treated by paramedics for smoke-related injuries.

A passenger in the terminal at the time of the incident, who was later evacuated, said she saw smoke coming out of a display stand from a duty-free shop.

“Significant” amounts of water and smoke remained in the area following the incident, according to police.

Police are encouraging passengers to check their flight status before arriving, especially those scheduled to travel to the U.S. Sunday evening or Monday. …

You can find terminal maps of Toronto Pearson Airport here – Terminal 1 is a large operation and pretty much the backbone of the airport.

Meanwhile the local police as well as the airport authority updated passengers via twitter:

Airport operations at YYZ have resumed now, but Terminal 1 still has some delays in trans border flights: 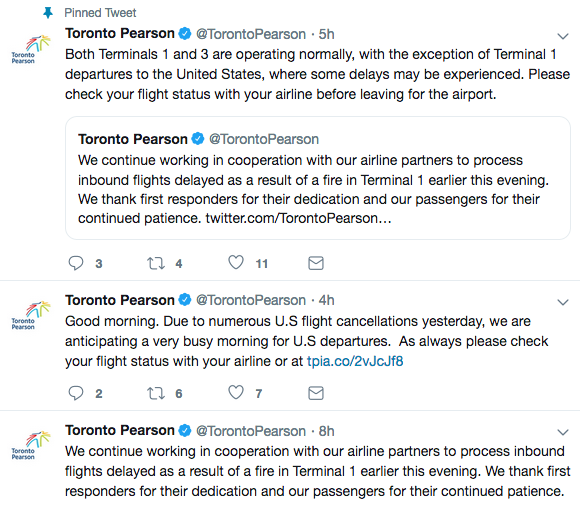 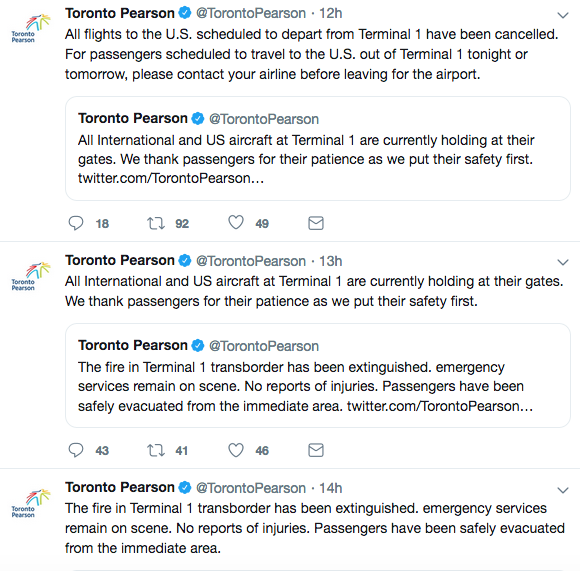 The fire appears to have come from somewhere in the duty free area behind the security checkpoint and no flames were visible to passengers. Nevertheless smoke is extremely dangerous, as the accident at Duesseldorf Airport in 1996 showed. 17 people died back then after fire and smoke spread through the terminal.

The delays at Terminal 1 will likely roll over a couple of days until the facilities are secured and an investigation has been concluded.

Since T1 also includes the U.S. pre-clearance facilities passengers should have additional time for their U.S. bound flights.