Over the years a bunch of different helicopter services have offered service between the main airports in New York and Manhattan which have come and gone.

Now Blade Helicopters (in business since 2016) is trying to market their product to the masses advertising helicopter transfers between JFK Airport and Manhattan for $195.

If I remember correctly, the first mainstream service was U.S. Helicopter which used Sikorsky S-76 models to shuttle passengers around and the price wasn’t cheap either back then (~ 2008) yet the company closed down as their business model was apparently not sustainable (at least at the time). Blade came onto the scene in late 2016 and they started to sell promotional transfers for $299 back then.

Now Blade has apparently lowered the prices again and set them to US$195 as I was able to verify.

You can access Blade Helicopters here to check their services and pricing.

I entered a random flight number for American Airlines and requested a ride from JFK to Manhattan: 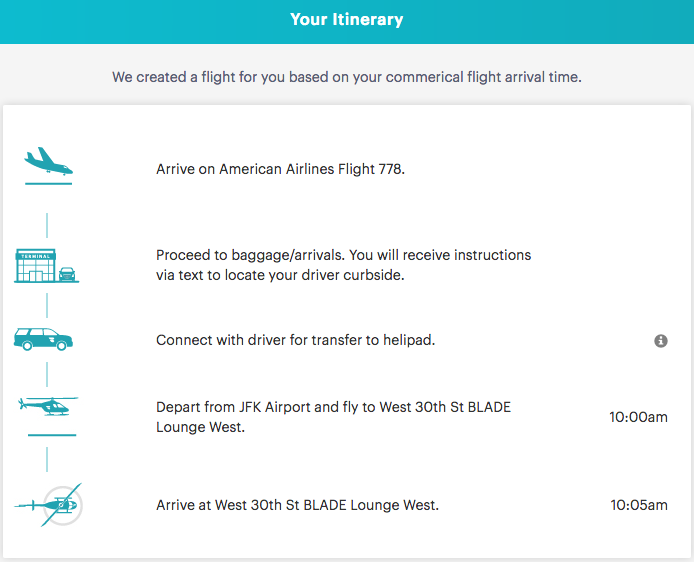 Looks easy enough. But what is the price that comes up?

So the $195 rate is actually available which is good. Some folks really like using the helicopter for airport transfers in New York but obviously there are some limitations for this service.

For one you can’t take a lot of baggage on your flights which sort of defeats the purpose of having a connector to/from the airport ahead of a trip.

Then of course you need to be located somewhere in Manhattan in order for this transfer to make any sense.

I took a JFK airport helicopter service once just for fun and enjoyed the experience of flying a Helicopter in and out of New York as it’s without a doubt one of the most spectacular cities in the world to look at from above. Since U.S. Helicopter shut down, I haven’t followed the market, partly because I haven’t been visiting NYC as frequently, but roughly a year or so ago offers started popping up in the media and various airline websites promoting new services.

The good thing is: Blade has now beenp around for a bit over two years so their business model seems to be working. Unfortunately their competitors weren’t as lucky in the past.

To make a decision if such a helicopter transfer is worth the money, you have to look at the parameters of your trip. Where are the arrival and departure points of your helicopter and how much commuting is required to get to these points? I wouldn’t pay a premium of $200-220 compared to a limousine or taxi for a 45 minute time saving. $195 base price for this gets my attention though especially since a cab would also run ~ $50-60.

I don’t get the impression that it’s actually worth it for the sake of saving time in comfort unless it’s really jammed on the way to/from JFK which can happen at times. It is however something special as an experience to enjoy the view of Manhattan while flying in/out and could be paired nicely with a leisure visit.