Turkish Airlines finally made  “the great move” to the Istanbul airport over this weekend. The new airport had been operating on a very reduced load since their soft opening last year (just a few domestic flights per day), waiting for Turkish Airlines to transfer all operations to their new home. This move should have happened on January 6, but it was delayed on four different occasions.

Finally, the airline settled for April 6 as the final date. Operations ceased at Ataturk airport at 2 AM, restarting from Istanbul Airport from 4 PM. Of course we couldn’t let this event pass without checking it out: I landed at Istanbul airport yesterday evening and departed from there this morning, and here’s my full report. 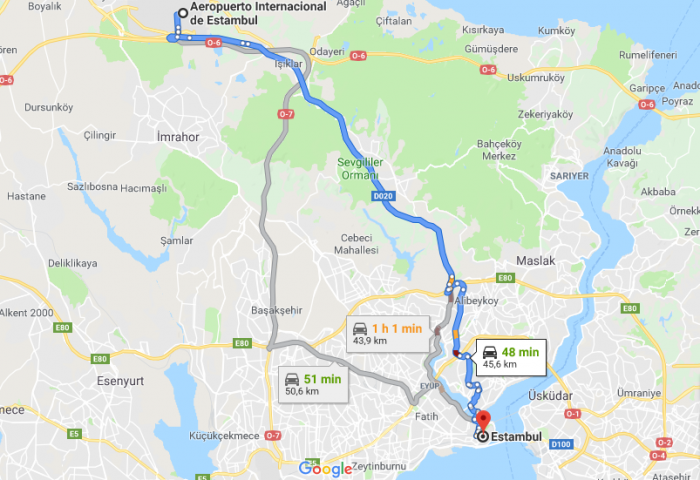 The new airport is in the middle of nowhere. There are some small towns around, but not much more. Hotel options around the terminal include (as of now) a YOTEL located in the airport terminal that offers both landside and airside rooms, and a Park Inn Hotel in Odayeri, a few kilometers away.

Transport options are limited at the moment. The metro won’t reach the new terminal until probably late 2020, and the only public transportation options available as of now are via bus. As I was landing at midnight, I decided to hire a private transfer to the city, which cost me 35€. My uber ride this morning back to the airport was around 22€. In both cases, it took about 30-35 minutes to reach my destination, with no traffic.

The exterior of the airport is still in construction site mode, as the terminal is just phase one of a much larger project, which if finished would be the largest airport in the world.

Here are some pictures of the airport exterior: 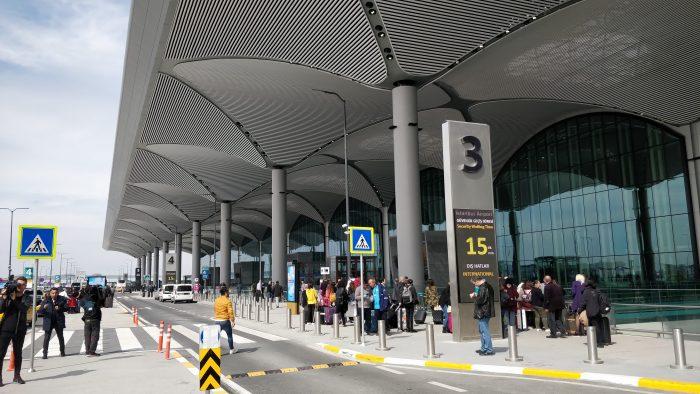 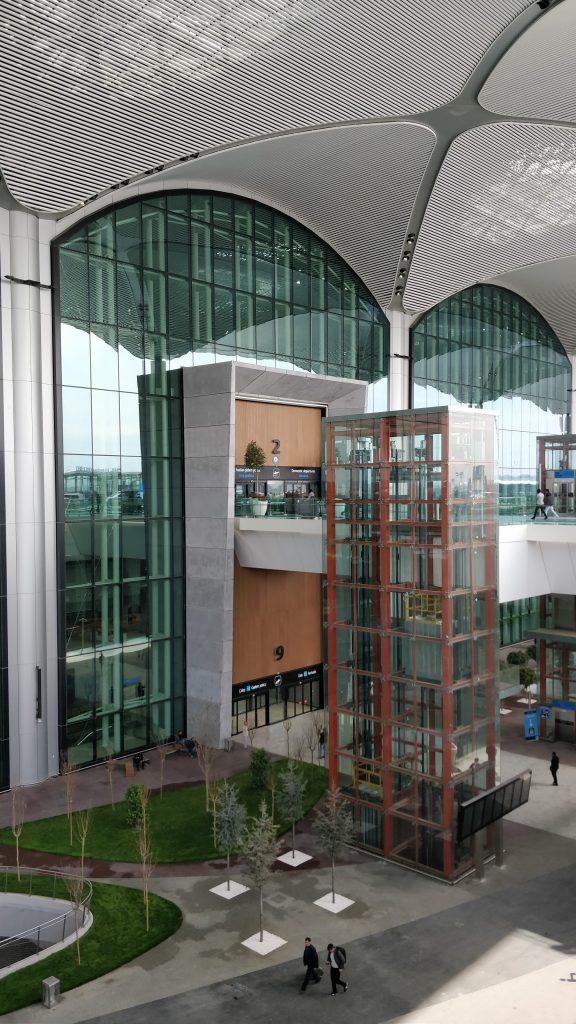 The check-in area is a massive open space. High ceilings in shapes that reminds you of traditional Turkish architecture and natural light (there are skylights all over the terminal) are a good match for this space, mostly occupied, of course, by Turkish Airlines. 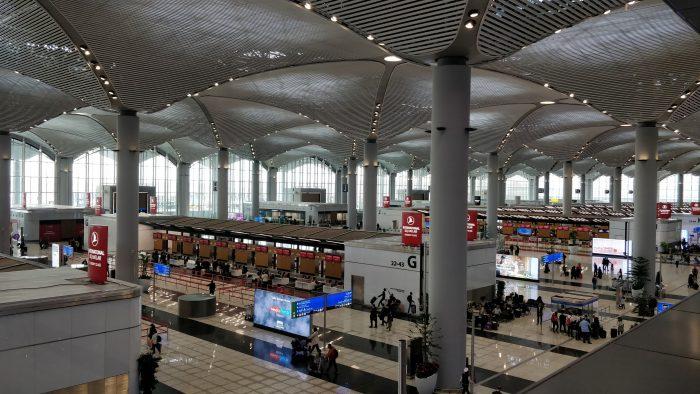 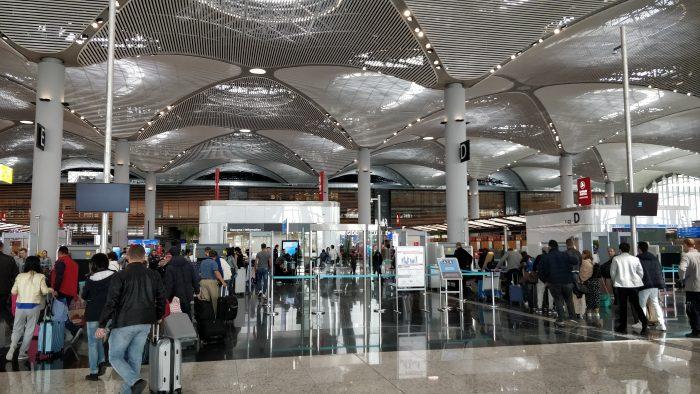 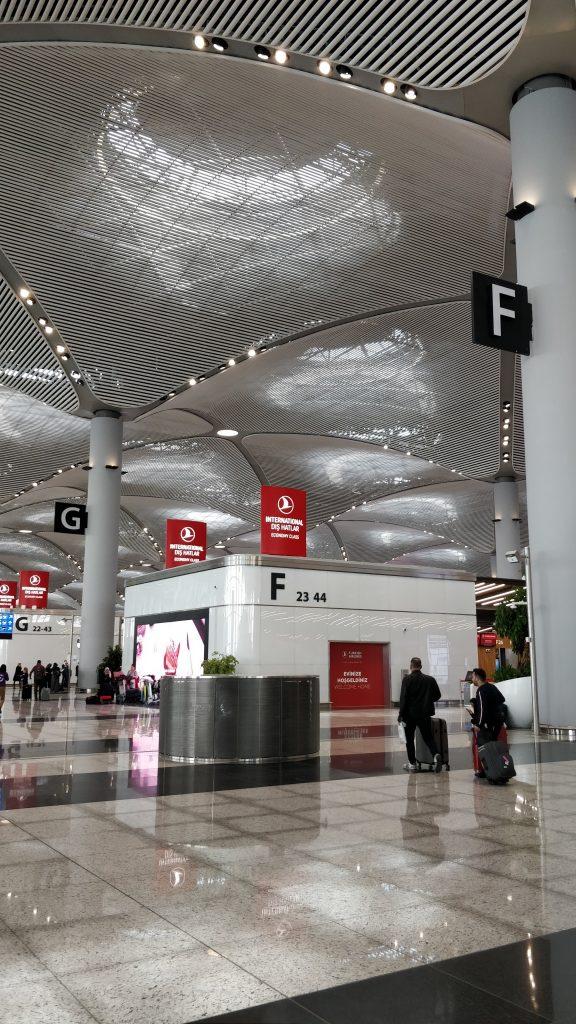 Here are some pictures of the departures hall and gates area. Again, open space and natural light are the protagonists. 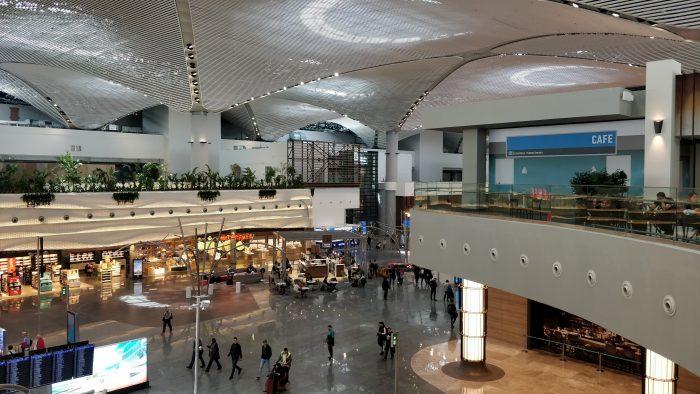 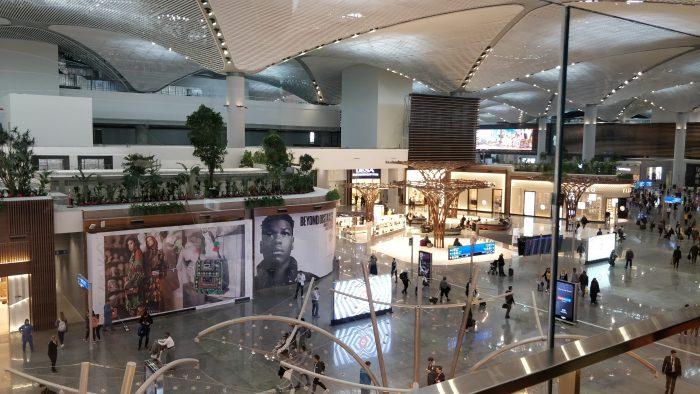 Although not all the shopping/food outlets are open, there ate plenty of options for those looking for distraction while waiting for boarding. 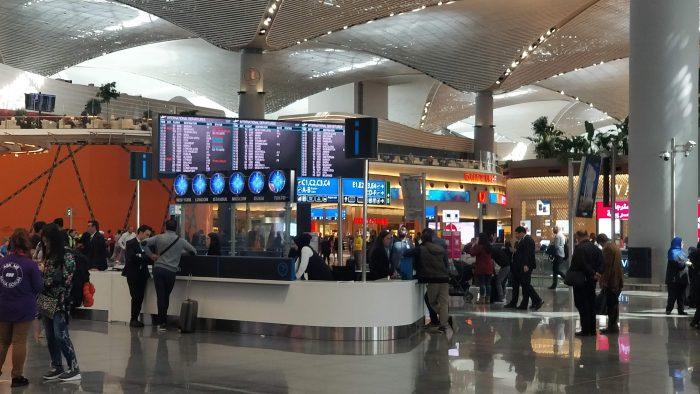 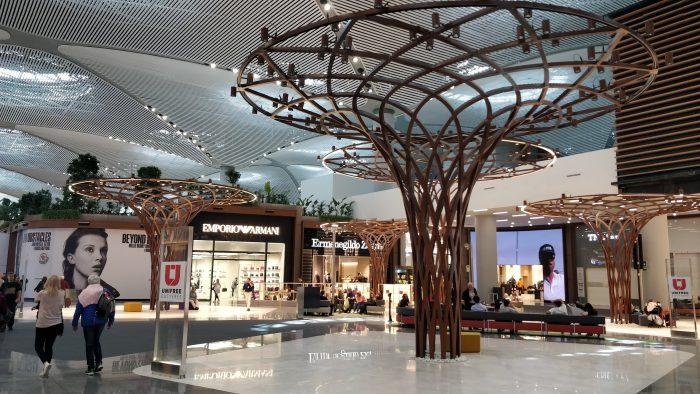 The gate areas are a big change compared to the old airport, which felt a bit claustrophobic at times. There is enough seating space, and charging stations/working areas for those in need of power and/or email time. 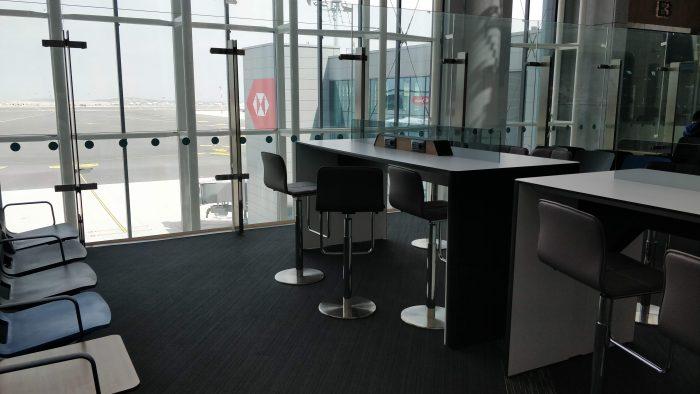 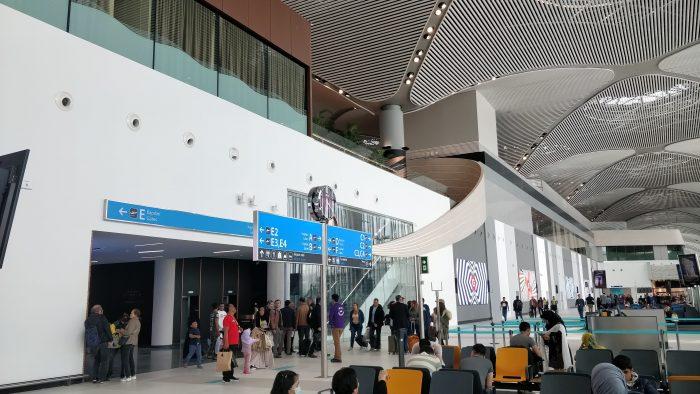 This area is very similar in concept to what they had at Ataturk airport. After disembarking, passengers arrive to a large hall with transfer desks, security check points for transit passengers, and passport control. There are fast track lanes for business class/elite passengers available. 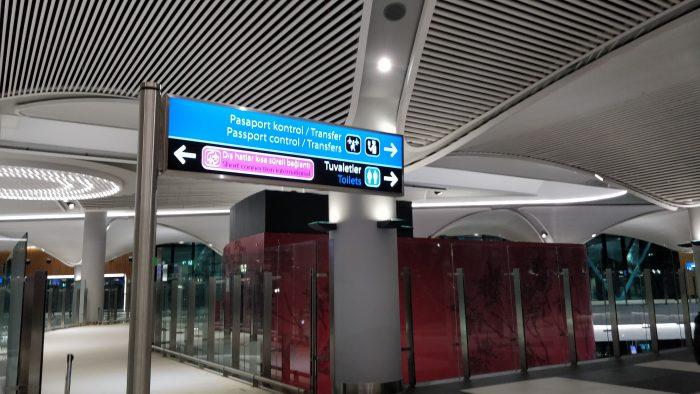 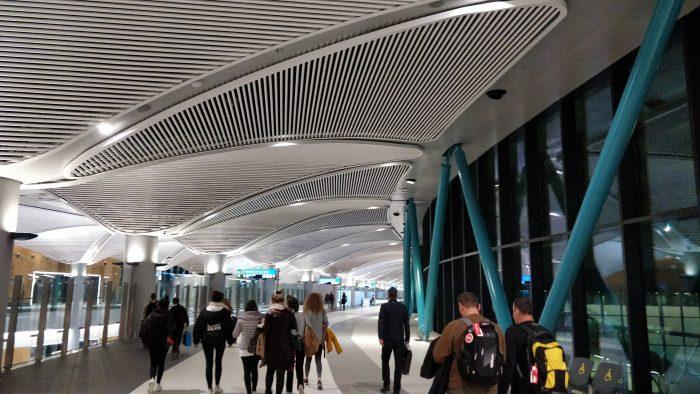 The luggage claim area is, again, massive as all the terminal is. It is full of duty-free shops. I counted at least 5 shops on my way out! 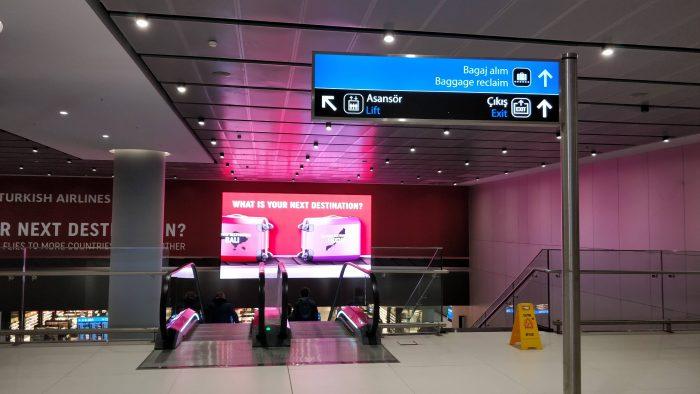 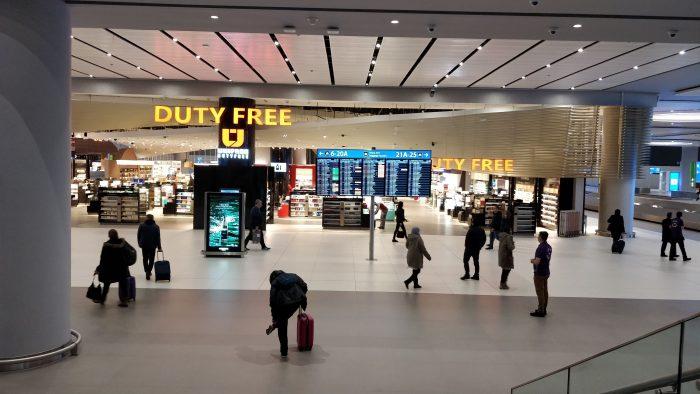 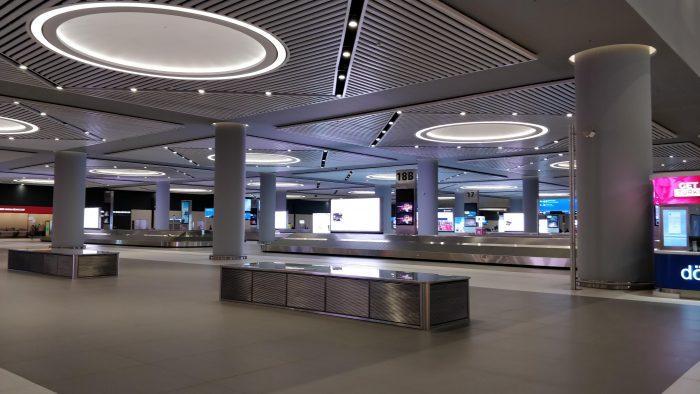 It is a beautiful new terminal. I loved the sensation of amplitude from the high ceilings and all the natural light it gets in the interior. The interior design is clean, contemporary but with hints of traditional Turkish design. Lots of greenery indoors. It is a definite improve from the old and worn down Ataturk airport. The cons: it is far, far away from the city, and the connectivity with the city center is not there yet.

Airfare of the Day [Business Class] TURKISH AIRLINES Singapore to Paris from $1,850