There are occasionally benefits if you book directly with an airline but that doesn’t extend to Juneyao unless you prefer being denied boarding at the airport.

It would be highly advisable to avoid booking anything on this specific airline’s website and rather use an OTA.

I was celebrating the New Years with friends in Bangkok and Phuket. One of the friends had never been to Shanghai and was flying from there back to the States. I suggested that we should leave couple of days before his flight and utilize the TWOV scheme for some Shanghai touring.

There were few direct flights between Phuket and Shanghai (all terrible hours) on number of Chinese airlines but doing it via a connecting flight would have easily doubled the travel time.

We decided to book via Juneyao Airlines that recently joined Star Alliance as a Connect Partner and the flight would have allowed earning some United MileagePlus miles.

The Juneyao flight was not coming up in business class on any OTA that I checked. The economy was readily available but decided against it. As this was a red-eye flight, having few hours of sleep would have been advisable.

I decided to book on Juneyao’s own website and that was quite a challenge itself. You had to first register before being able to book and pay. The browser was giving all the possible warnings from unsecured connection to expired/wrong certificates. The airline also used a third party to process the payment.

I was finally able to issue the ticket (took more than 30 minutes) and the airline sent the eticket confirmation to my email (above is the Google’s translation from Chinese).

My friend later found the flight on Expedia’s Singapore website and issued the ticket there. The flight didn’t come up on either Orbitz’ or Expedia’s US websites or Thai one.

The ticket information was also available on the airline’s website.

The economy line for this 3:40AM flight was long. 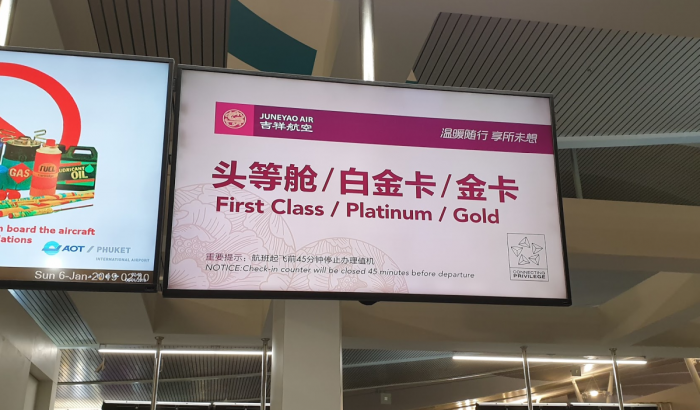 But there was nobody at the business class one.

My friend’s boarding pass was promptly issued but the agents were typing on mine.

I was told that my payment hadn’t been completed despite the charge already posted to the credit card used and eticket issued. The check in staff were Thai Airlines employees overseen by two from Juneyao.

The check in deadline was soon approaching (I had been there for 30 minutes by now) and I suggested that they just refund the ticket and charge one of my credit cards on the spot for a new ticket. 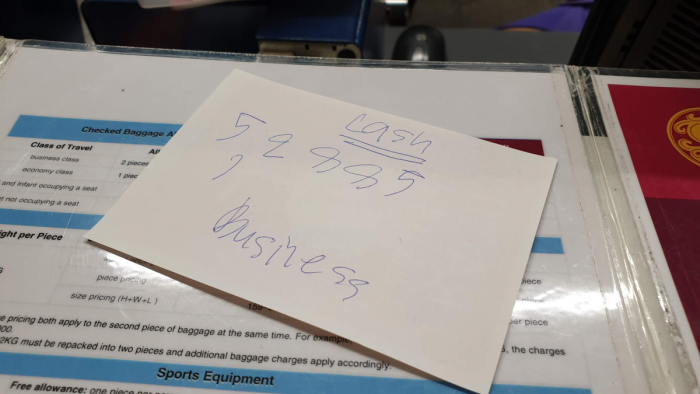 I was told that they cannot accept credit cards at the airport (are there really airlines that don’t accept credit cards for payment?) but I would need to pay three times the price of the already issued ticket in CASH. Obviously. I was not going to pay close to $2K for four hour flight.

The flight went without me. The seat that I had reserved during the booking process had been provisioned for a passenger.

Juneyao employee told me that I would be received a call from the airline in the morning. Four months have gone and the call still hasn’t materialized (color me not surprised).

What did I do wrong? Basically booking directly with an airline. The issue with these Mainland China airlines is that there is ZERO accountability and customer service at the best of times is bad and other times, like here, non-existent.

I have opened a case with the DOT as this flight was booked on the Juneyao’s website for the United States. Star Alliance should do better quality control before allowing scammy airline such as Juneyao tarnish their brand.

If you are thinking of flying on Juneyao, do buy the ticket from a travel agent or an OTA. Otherwise, you may end up holding the bag at the airport (rather literally) and denied boarding (like me).