Finnair has been expanding its presence in North America by (re)opening flights to both San Francisco and Los Angeles in addition to the New York, Miami and Chicago.

Finnair invited a friend of mine, European travel journalist Mr. Krister Stone, to be on this flight and he has filed the following report with us.

While the destination certainly is not new to Finnair, the airline has now re-opened their route between Helsinki and Los Angeles as of March 31st. The airline first flew to LA from 1981 to 1991 using the mighty DC-10 aircraft. The re-opened Los Angeles route, unlike Finnair’s other US destinations that utilize A330s, will now be served by an A350 and has been given the flight designation of AY001.

After exiting the Schengen area at Helsinki airport to take part in the inaugural flight, I headed over to the non-Schengen Finnair lounge that was partially under construction. Unfortunately, it was so overcrowded that Japan Airlines passengers were being turned away and compensated with shopping vouchers for the inconvenience.

Despite those extreme measures, there was hardly a place to sit and the lounge menu was rather scant. The famous Finnish game stew riistakäristus with mashed potatoes and lingonberry salad was being served, but with no place to properly dine I only ordered a “Blue Sky” cocktail. This cocktail consisting of blueberry liquor and champagne was being offered to commemorate the re-opening of the LAX route. The Blue Sky was a sneaky mixture, tasty and very beautiful in colour but probably capable of creating a memorable headache should you partake in a few of them. 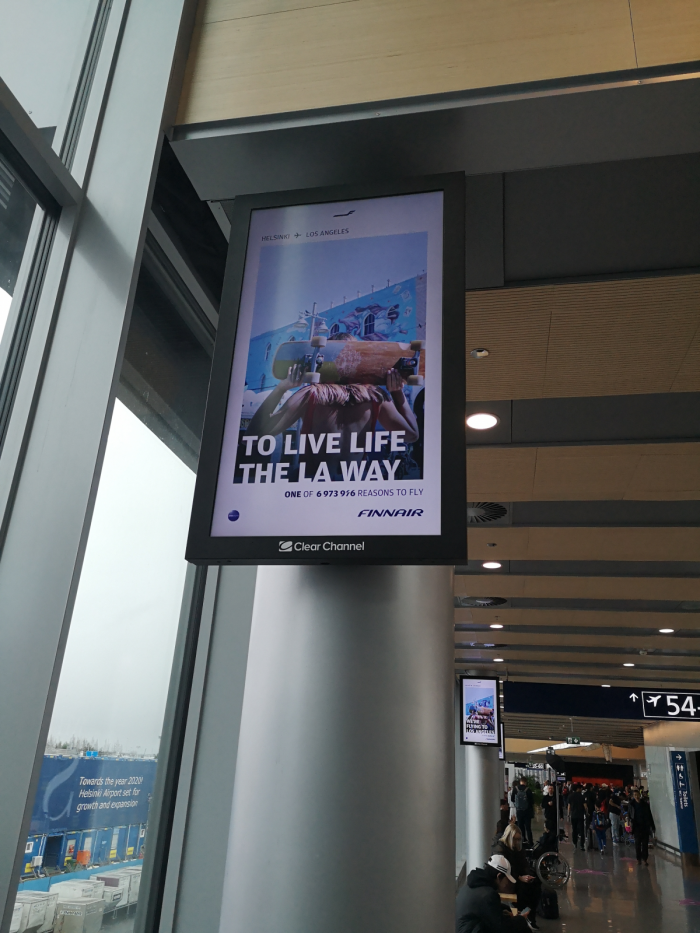 As I headed towards Gate 54, I noticed the odd smell of hamburgers in air and eventually saw that Finnair had a full cart of the American delicacy available at our gate. 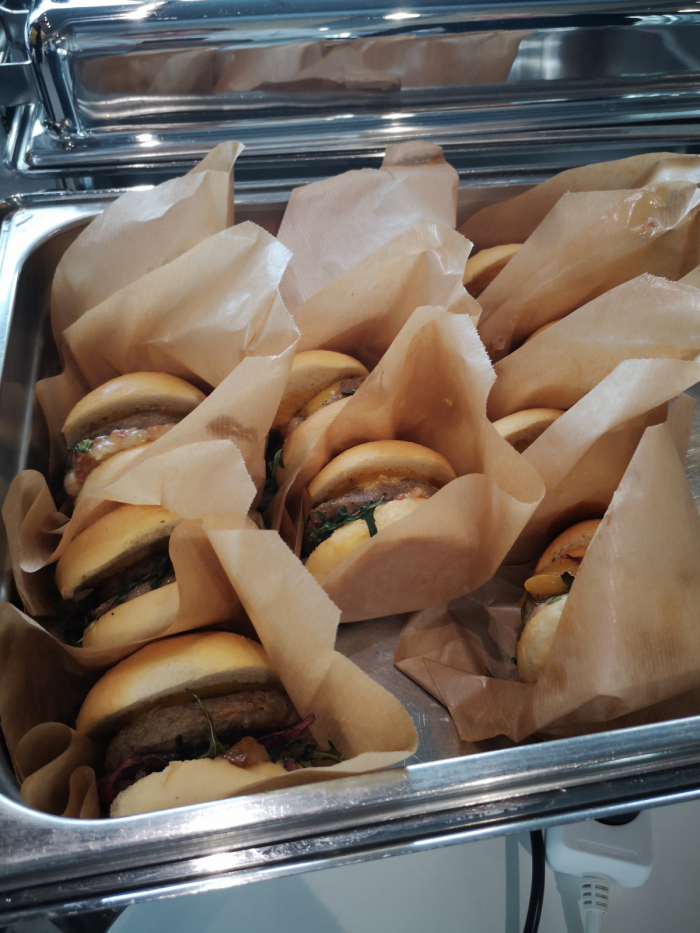 The airline was offering them to anybody who wanted them, but it seemed that not many passengers decided to indulge, rather waiting for the on-board fare.

Keeping with the theme at the gate, there was an LA-style photo-shoot and a flight attendant in a retro uniform handing out sunglasses as gifts to passengers when boarding the flight. It was quite an extravagant show overall considering how serious and practical Finns tend to be.

Despite the fact that the inaugural flight was completely full, the Business Class cabin felt quite bright, airy and peaceful. In the A350 configuration there is no luggage compartment above the middle section of the cabin and that certainly helps creating this illusion of spaciousness.

All the members of the cabin crew were also in a jovial mood that gave the promise of a great trip. It was clear that Finnair put their best crew forward for this important flight. In particular there was one experienced steward, who could have passed as a philosophy professor with his beard and glasses, that excelled in taking care of the passengers with great attention and wit. 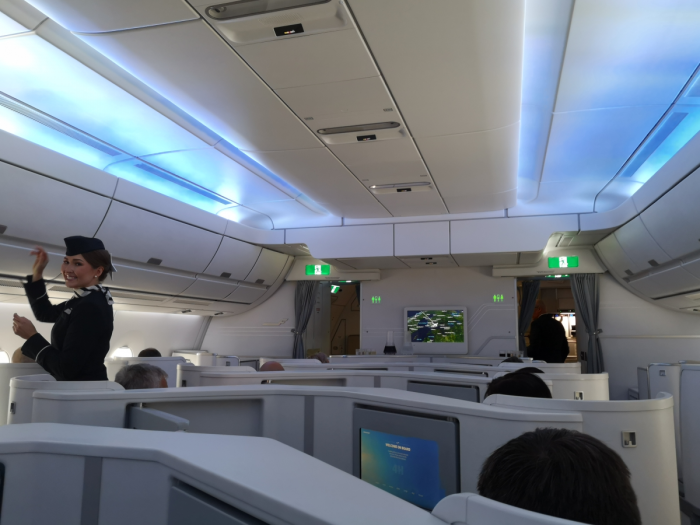 In regards to the seating layout on the aircraft, I have to direct some criticism here at Finnair which used a 1+2+1 abreast seating configuration in Business Class. Make no mistake, the seats themselves are very comfortable and give everyone in Business Class direct aisle access, but it is the number of rows in the cabin that is the drawback.

Finnair has 8 rows of those great seats in the space between first and second doors of the aircraft whereas Singapore Airlines has 7 rows of seats in same area and Qatar Airways only has 6! This means that the great Finnair seats are simply too close to each other. When in the lie flat position I struggled to find enough room to stretch my legs (and I am only 185 cm/6’1” tall), so on the return flight I did not get much sleep. But from a positive standpoint, I did manage to see the Northern Lights while over Greenland and this puts things back into perspective. 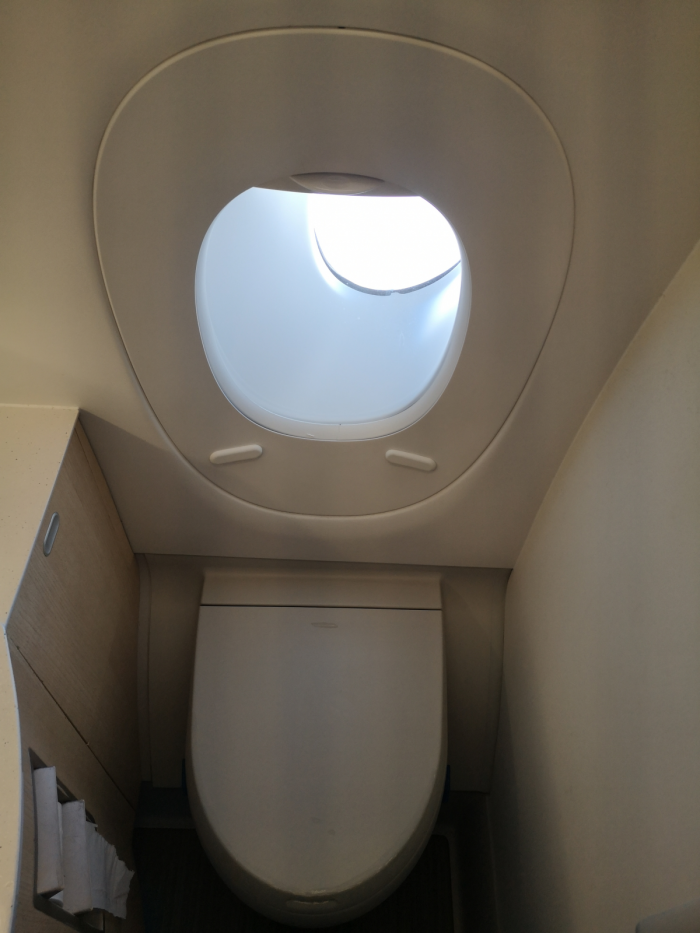 I did also find it peculiar that the front-most lavatories, which have huge windows, were better stocked than the ones in the back of business class. On both of my flights the front lavs had a selection of skincare products including small eye-creams, while the second set of business class lavatories were more spartan with just soap, hand cream and air freshener.

It occurred to me that back in 2015 Finnair introduced a “female-only” lavatory on A350s that received some media fanfare and I forgot to ask the crew whether this is still an ongoing arrangement. I definitely did not notice any signs and if Finnair has designated female-only lavatories they better mark them so clearly that one sees the sign… especially after having a few drinks. 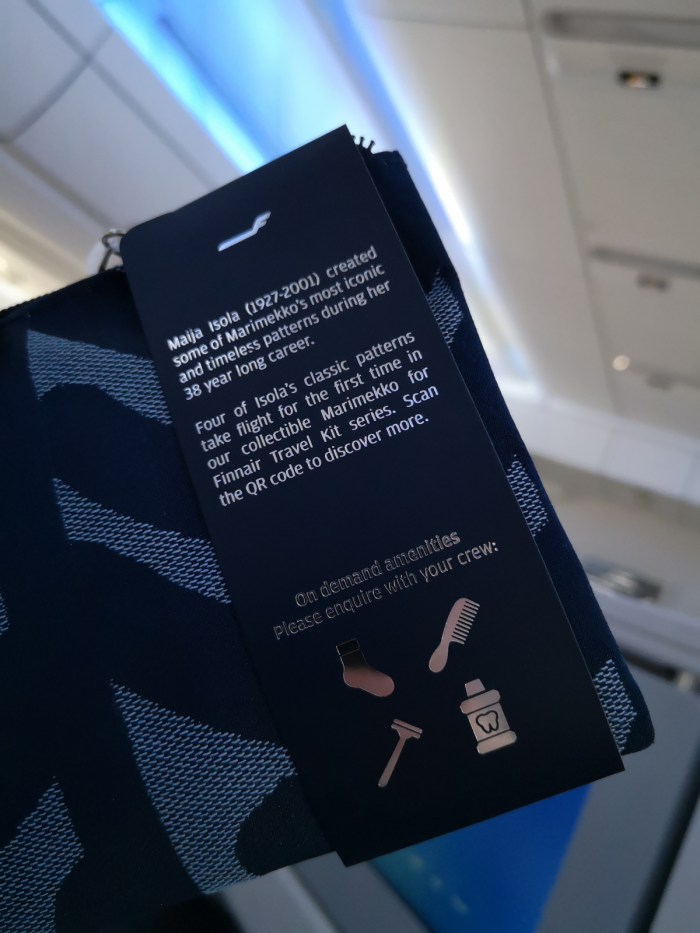 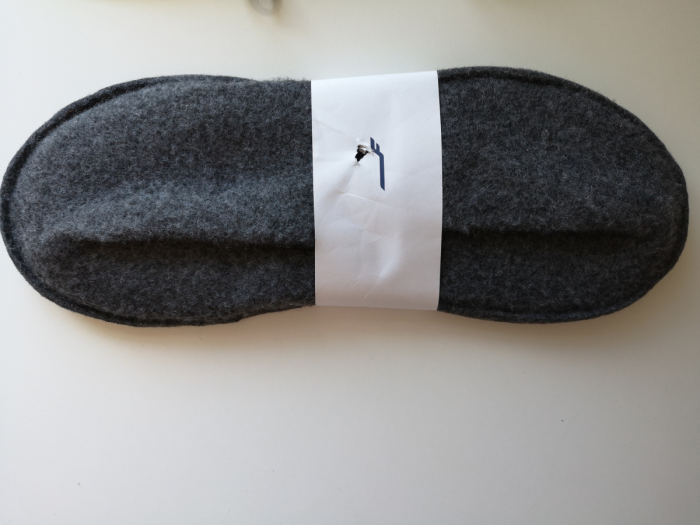 The Finnair amenity kit included a small chamomile scented facial cream along with a toothbrush, toothpaste, eyeshades and earplugs. While the kit does have the necessities, it definitely fell short and could use a little more lavishness and luxury.

After a pre-flight glass of champagne served in a very iconic Ultima Thule glass by Iittala and a smooth takeoff it was a time to find out what was on the menu.

A top Swedish chef, Tommy Myllymäki had created one of the two appetizers and his cold-smoked salmon with horseradish coleslaw was as fresh and exhilarating as airline food can possibly get.

Of the five entrée options, I chose smoked Arctic char with salsify root puree and dill seasoned white wine sauce, that needless to say was absolutely delicious. Interestingly, one of the entrées was a soup that I later chose on the return flight and that dish certainly did not disappoint either. 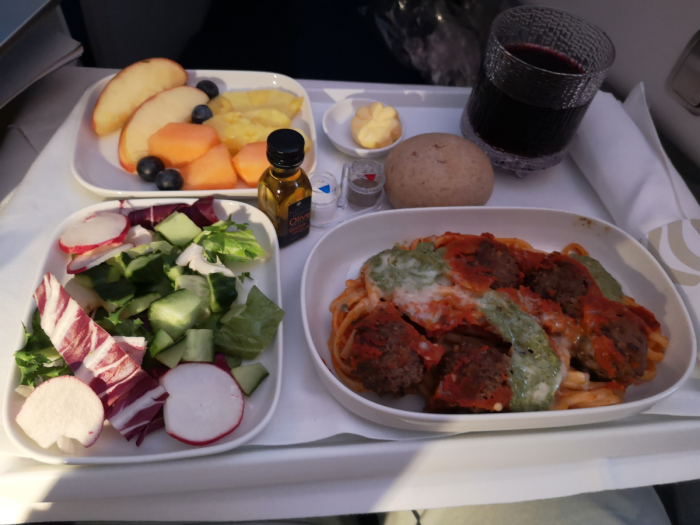 Finnair’s bread basket is also excellent and in addition to having the staple breads, has two very “Nordic” choices: dark rye bread and a very thin crisp-bread which went well with the Finnish cheeses.

I also liked the fact that every time I ordered coffee it came with one or two Finnish chocolate candies. 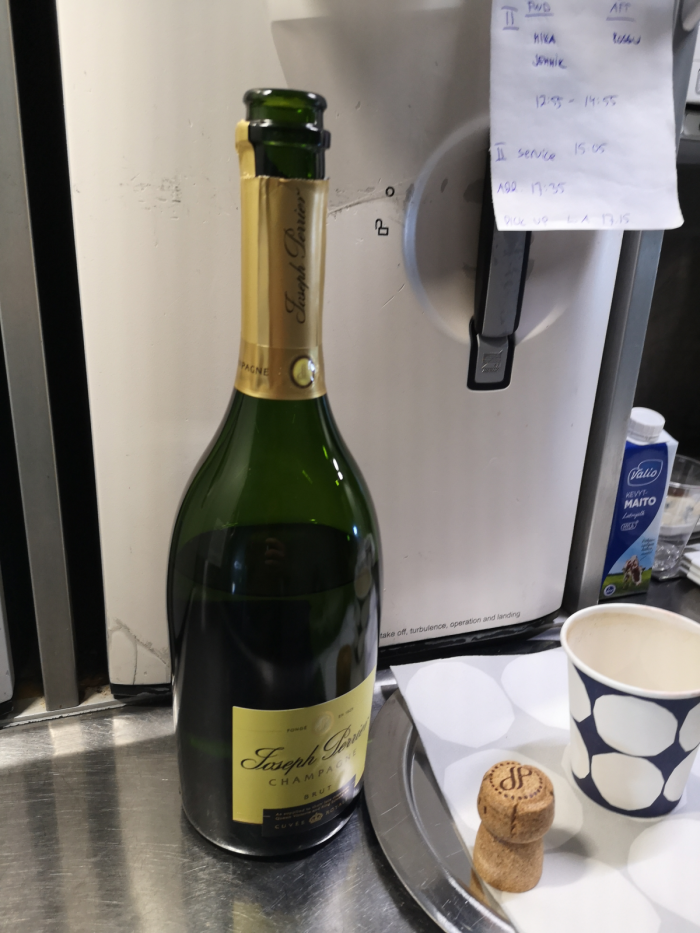 Due to the northern geographic location of Finland, it is interesting to note that the route between Helsinki and Los Angeles does not cross much of the Atlantic at all, just a miniature Norwegian Sea.

There was starkness to the landscape as we passed over the icy white plains of Greenland. 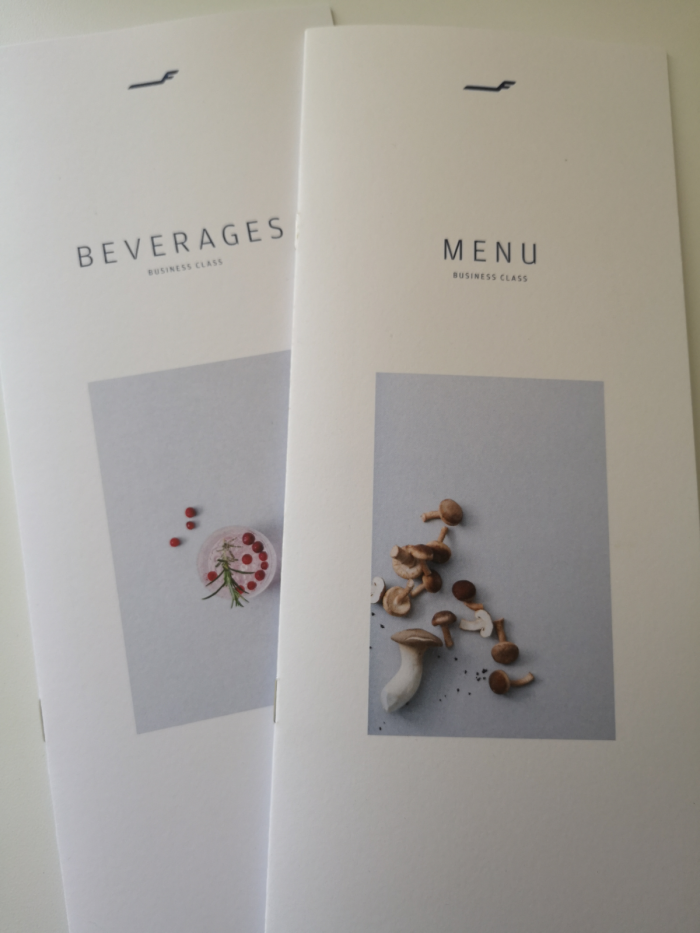 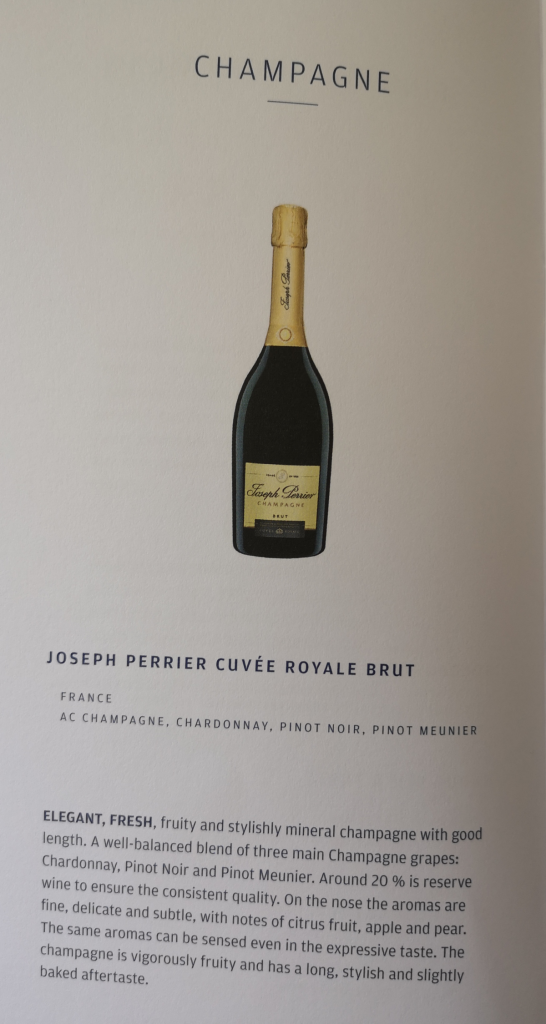 Finnair’s Business Class passengers and Finnair Plus Gold members receive one hour of complimentary Wi-Fi on all A350 aircraft (and on most A330s) and Internet is totally complimentary for Finnair Plus Platinums in any cabin. Even for those without status and traveling in economy, the Internet was very reasonably priced at fewer than 20 Euros for the entire flight. The speeds were excellent, although I did find connectivity slow during the Trans-Arctic section of the voyage where the aircraft is the furthest from civilization

The IFE had a wide selection of content and the system worked without a hitch during the flight. I managed to get in three movies during the journey, including The Favourite, Can You Ever Forgive Me and Bohemian Rhapsody.

One disappointment however, was the lack of physical newspapers and magazines. While the trend is to go digital with printed media and reduce costs for the airlines, many still prefer to read from paper as it is easier on the eyes. The Finnair Business Class seats have little reading lamps, so it would be nice if they consider bringing back traditional print media to make use of this feature.

On a related note, I must mention that on both of my flights I also could not find a copy of “Blue Wings”, the Finnair inflight magazine, in the seat-pocket and had to specifically request it from the crew. It would seem that ground staff were not properly checking seat pockets, which may also explain why on my return flight I found an A330 safety card rather than an A350 card. When I mentioned this to a purser she seemed to be mortified and promised to speak with ground handling staff immediately once back in Helsinki.

As is common with many airlines and their inaugural flights, in the middle of the flight a steward came through the cabin with a Polaroid camera and took photos of willing passengers who wanted a souvenir of their journey. It is always a nice touch and reminds you that you are part of a very special flight.

Everything considered, I found the flights between Helsinki and Los Angeles quite enjoyable and can definitely state that Finnair has a great product. They know how important little details are in both the soft and hard product, whether it be the attentiveness of the crew or the nice glassware and beautifully designed blanket.

The airline’s food is generally excellent, especially if you like Nordic cuisine and Finnair certainly know how to serve seafood, which is something that many airlines struggle with. There was a good selection of wines and they were served liberally. The crew on my flights, much like other Finnair crew, were calm, professional and did their utmost to ensure passenger comfort during the trip.

As an aside, it seems that there was something amiss at LAX when it comes to Finnair’s presence there. The aircraft did not receive the customary water-cannon salute upon arrival of the inaugural flight in Los Angeles, it being cancelled on the grounds of drought. That is understandable, but in the airport itself the flight was referred to as an “Air Finn” flight over LAX’s PA system and the flight did not show on any of departure screens of the oneworld lounge.

If LAX wanted to send a message they did not care much about Finnair’s return to Los Angeles, they certainly succeeded in doing that. Other than that I am sure that the LA route will be successful for Finnair and unlike it’s previous 10-year tenure, this flight will become a staple in the airline’s route network.

Another curiosity from airport tales in China was reported in the media this week as four men who were booked on a domestic flight...

Now Accepting Applications: What Does It Take To Become A $2000...

Marriott Teams Up With Sunwing To Bring 19 Resorts Under Autograph...