We wrote on Wednesday (access here) about Marriott Bonvoy Ambassador gifts that the program is sending out to members. 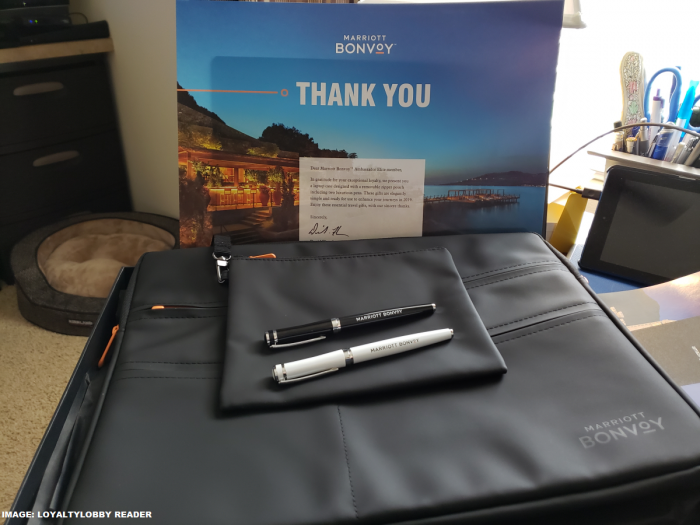 I haven’t received mine yet and a LoyaltyLobby reader forwarded us a photo of the one that he had gotten, and it is what I believe is the standard one for everyone.

You can access Marriott Bonvoy’s page for Ambassador program here.

Marriott Bonvoy is sending out to Ambassador members a computer sleeve and couple of pens with their new membership card.

Marriott told us that they cannot send this Ambassador gift to the following countries due to customs regulations: Quebec, Syria, Yemen, Somalia, Iraq, Qatar, UAE, Bahrain, Libya and Brazil.

It is nice that Marriott Bonvoy has decided to send out a more meaningful Ambassador gift this year (previously they haven’t offered anything for Platinum Premiers).

SPG used to send out gifts to most/some Ambassador program members infrequently. I like the fact that Marriott has decided to continue this tradition.

Gojek Grabs My Rides In Singapore

Marriott has offered a Summer Dreaming in Thailand rate plan for quite a few months with F&B credit and bonus...

Marriott Bonvoy launched in early August its third points sale of 2021 and has decided to offer a Mystery Bonus...

Marriott has cobranded credit cards in several markets, such as Mexico, United Arab Emirates, and Japan, which still have an...