American Airlines just announced its financial results for the Q1 2019 and while the company is doing well there are some worrying signs on the horizon that will cost the company dearly this year.

One gigantic looming cost is the Boeing 737-Max grounding as well as rising fuel prices that could end up costing the company a $1 billion by the end of 2019.

The financial results are strong but management and shareholders might have reason to worry as indicators show a rise in fuel prices and of course the Boeing issue that will not go away quickly.

You can access the official publication of the the financial data in American’s newsroom.

… “As we progress toward the busy summer travel period, demand for our product remains strong. However, our near-term earnings forecast has been affected by the grounding of our Boeing 737 MAX fleet, which we have removed from scheduled flying through Aug. 19. We presently estimate the grounding of the 737 MAX will impact our 2019 pre-tax earnings by approximately $350 million. With the recent run-up in oil prices, fuel expenses for the year are also expected to be approximately $650 million higher than we forecast just three months ago.

$1 billion USD in unexpected expenses on two ticket items alone. Definitely not pocket change even for a big carrier like American Airlines.

American has a rather large fleet and is able to somewhat mitigate the grounded 737 MAX flight on an operational basis but of course these expensive aircraft are now sitting around in hangars and desert fields throughout the country with the result being a $350 million price tag. It’s uncertain if and in what way carriers including American will be able to recoup these expenses from Boeing in the coming years.

Here are some bullet points of the AA financials from their press release:

JT Genter of TPG in his analysis of AA’s Q1 numbers noted that 9.2% of passenger revenue was from award/AAdvantage redemption travel.  AA’s Q1 2019 SEC filing shows that this equates to $886 million out of the total passenger revenue of $9.658 billion. 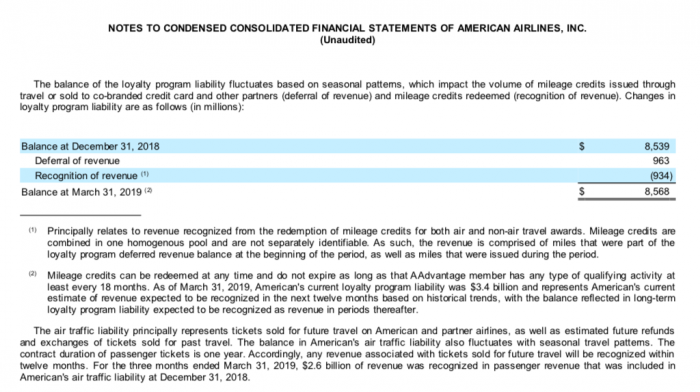 American Airlines continues to have a very healthy business and the 737 MAX debacle, which has weighed heavily on the carrier, will have an effect on their competition as well. Likewise with the rising fuel costs, although Delta is in a slightly better position as they invested in a refinery several years back.

For the average investor holding American Airlines stock, despite solid profits, the shares have not performed well in the past 12 months.  As of this writing, American Airlines (NASDAQ: AAL) shares are down 27% over their 52-week high.