A friend of mine stayed at the Hotel EMC2 (Marriott Autograph Collection) in Chicago last week and found something very interesting.

The hotel had two robots named Leo and Cleo that delivered items to rooms. You could use Alexa to order them.

Here’s the report that Neal filed:

Marriott knows they have a problem with formulaic hotels that are not attracting the upscale guest with a revenue premium they desire, so they created a soft brand called the Autograph Collection. Marriott also made a key decision to let each property run almost as if they are a boutique, independent hotel while using the Marriott reservation platform and Bonvoy loyalty program and benefits. This has resulted in a collection with some interesting properties, including the EMC2 in Chicago, IL.

Where art intersects with science is the theme. The name being a not-so-subtle nod to Albert Einstein’s equation related to special relativity.

While a lot has been written about the design elements of the hotel, we wanted to focus on two service related items that we think are going to be part of the future of as they migrate into mainstream hotels: the robots and the “smart speaker”. 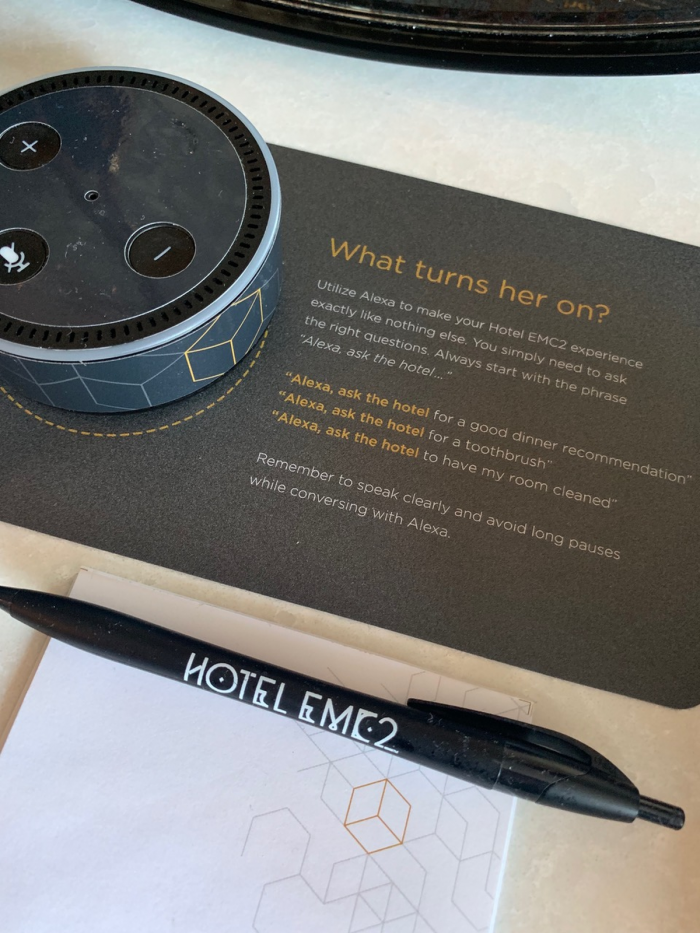 EMC2 chose to use Amazon’s entry level Echo Dot in each room. There is a pad under the Dot explaining its use and offering some sample requests. It was great that you could request hotel services such as your room being cleaned, extra towels or even basic Alexa skills such as the weather forecast or to play music. However, it was disappointing that the Echo was not connected to the room HVAC or lights. Alexa was confused by my asking what floor the fitness center was on – an easy one they can fix.

Despite the lack of connection to lights or HVAC, Alexa via the Echo Dot was something I found useful, but understand others may want to unplug these devices due to privacy concerns. With the price of purchasing so low and integration being built into other devices (Google Home, Apple’s Siri, etc.), I expect more hotels to offer this in the near future. Hotels will have to manage expectations on how deep these devices control the room and link to in-house staff and services. Just as hotels are offering TV’s that let you login to your Netflix and Hulu accounts, integration/automation with their personal smart device accounts is something I expect that to be one way guests compare hotels very soon.

The EMC2 has 2 in-house robots: Leo and Cleo. They are based at charging stations next to the front desk when they are not out and about performing their duties. It was great to see them coming and going, being careful not to run into you in the hallway and flashing light patterns rather than annoying noises. Beyond tying into the theme of the hotel, I thought they were fun and a great way to have the front desk deliver basics such as more towels/soaps/etc. The robots were not set-up for room service or large items such as a pillow. The robots use hotel WiFi so they can call the elevators themselves, but since they don’t have arms to do a knock-knock, their method of announcing their arrival at your door is to turn on your TV will a message (even if your TV is turned off).

While a few have grumbled about robots taking away jobs, I found these robots doing basic tasks frees up the human staff for more complicated and service oriented requests. Knowing that similar robots are at a few Sheratons and Aloft properties, I’m sure Marriott is among other chains that are monitoring their use and customer reaction before deploying them wider in their brands. 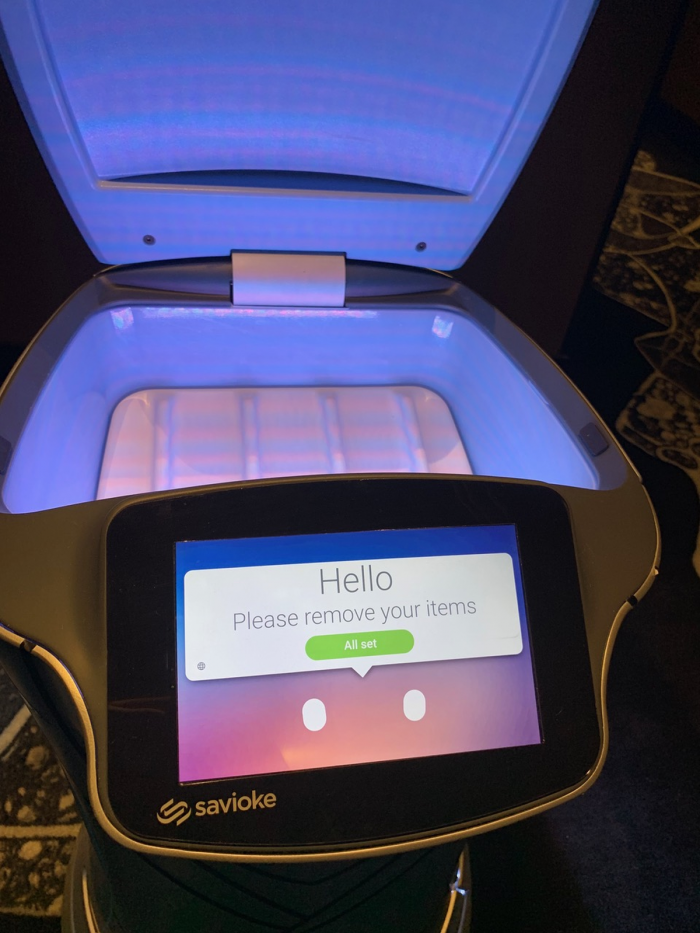 Deeper, service-related interaction with technology is coming to hotels. While technology likely keeps costs down for the hotels, they need to provide value added service before guests will benefit or even use.

Privacy should be addressed too as hotels find newer generations of guests who are more and more savvy as what this technology can do to harm their privacy. In the meantime, the EMC2 seems to be on the right track.