With the addition of El Al the Alaska Airlines Mileage Plan portfolio is continuously growing, making it pretty much the best universal (non-alliance bound) frequent flyer program out there.

Customers who fly a lot of different airlines that aren’t in one particular alliance can really profit from such a system, and since the miles accumulated count for Alaska Airlines Mileage Plan status as well it’s even possible to obtain status with Alaska.

This agreement is in addition to the codeshare agreement that recently came into effect between the airlines allowing EL AL to place its “LY” code on various Alaska Airlines “AS” flights in the U.S.

You can access Alaska Airlines Mileage Plan here and see details of the El Al partnership.

Award redemption isn’t available at this time, but will be at a later date.

This is the Mileage Plan earning chart: 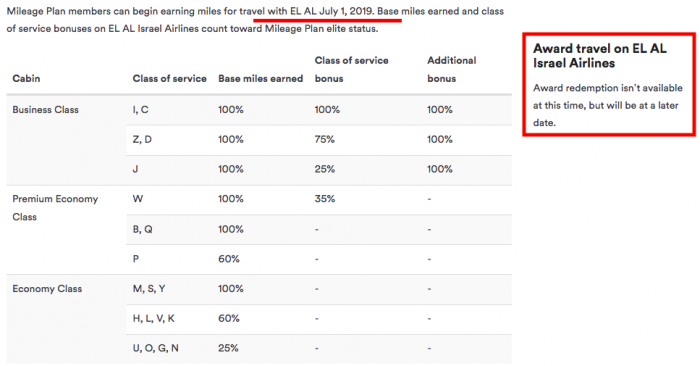 The earning rates seem fair even though deep discount Economy Class will only earn 25%, which is in line with that of many other airlines such as Cathay Pacific when crediting to Mileage Plan.

Business Class tickets will earn a cabin bonus as well as a 100% “Additional Bonus” which is one of Mileage Plan’s special features for premium cabin travelers. Any elite level bonus miles will also come on top.

Unfortunately at this point the redemption of Alaska Airlines miles for flights on El Al isn’t available yet but the website at least outlines that Alaska will establish the redemption option at a later time.

I’ve become a big fan of Mileage Plan as their earning and redemption opportunities are very flexible. I’ve also signed many friends up for this program, many of which book their tickets based on the best price and aren’t loyal to one particular alliance. Someone I referred last summer has in the meanwhile made it to MVP Gold by flying on Emirates, Condor and Cathay Pacific. They wouldn’t have earned anything worthwhile had they signed up at each of these three individual programs.

It’s also possible to request a status match with Alaska Airlines Mileage Plan from a competing tier. Keep in mind that Alaska is very restrictive in this regard and allows a match only once per account lifetime.

Airfare of the Day [First Class] ALASKA AIRLINES Seattle To Miami (or v.v.) from $269 OW