Our Fabulous Fridays topic today is about tickets with a stopover option that allow the traveler to design the itinerary more flexible with the possibility of adding additional destinations.

Airlines are usually quite restrictive with stopovers and often they incur a fee per stop but there are instances where the ticket rules actually allow stops at no extra cost.

Stopovers can be useful when it’s already clear that the traveler wants to visit multiple cities and can therefore select an airline that for example has it’s hub city in the first point of travel.

I experienced something similar two months ago when I was looking to book a one way ticket from Singapore to Bangkok. I already knew that I’d be going to Hanoi in May so I compared prices how much it would cost to book one ticket with a stop in Bangkok rather than purchasing two one way tickets.

For price comparison I used the multi city function of Kayak and then selected from the results.

It turned out that Thai Airways had the cheapest price for a stopover ticket: 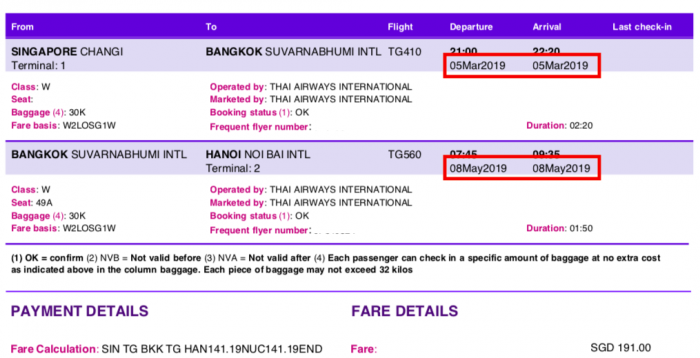 Thai Airways is usually expensive but for this particular ticket it turned out to roughly $105 per one way segment which was more than acceptable to me so I booked it that way.

Singapore – Bankok as a one way alone would have cost me exactly $15 less than the entire ticket, probably due to the airport tax in Bangkok. A much better deal to just book both segments together.

I still miss the days when most frequent flyer programs allowed you to make stopovers at pretty wild levels. I booked amazing awards with BMI Diamond Club but also United and American Airlines. Singapore Airlines still allows stopovers on awards so that’s definitely worth looking into.

With revenue tickets it’s a bit challenging but there are definitely options out there as well. This Thai Airways one is an example but Malaysia Airlines usually allows stopovers for $50 per stop on their special offer fares in Business Class too. It pays off to study the fare rules and play around a little!