The Netherlands is facing a public transportation employee strike this Tuesday (May 28, 2019) that will severely affect the entire country. 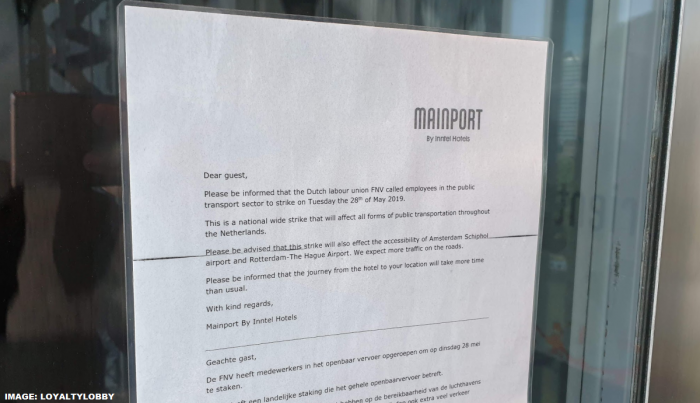 There will be four trains per hour between Schiphol and Amsterdam Central but all other transportation options are unavailable, excluding taxis and Uber.

Here’s an excerpt from the NLTimes (access their piece here):

Trains must continue to take passengers to and from Schiphol Airport during a national public transit strike scheduled for Tuesday, a court in the Netherlands ruled on Sunday. Though buses, subways and trams will grind to a halt, the transportation unions were ordered to ensure that at least four trains per hour will run each way between Amsterdam Centraal and Schiphol.

The trains will run between 5 a.m. and 9 p.m. Stops will also be scheduled at the Amsterdam Lelylaan and Sloterdijk stations. Few, if any, other trains are expected to run that day which national railway NS said should be a “serious nuisance” for people.

Schiphol said about half of airplane passengers access the airport, or depart from it by public transportation. With tens of thousands set to arrive on Tuesday it was not clear how these passengers would leave the facility.

The employee union is seeking to freeze the retirement age at 66 years and seeking better pension benefits. People who rely on public transportation including tourists visiting the country are the parties who will face a very difficult Tuesday.

Getting to/from the Amsterdam’s Schiphol airport will be a mess. Luckily, although I am in the Netherlands at the moment, I don’t have to rely on public transportation before Wednesday morning (flight out).