Hilton is celebrating its 100th anniversary this year and the grand date is this Friday – May 31, 2019. Conrad Hilton opened his first hotel in May 31, 1919 in Cisco, Texas and six years later in 1925 under the Hilton name.

Many Hilton affiliated hotels are celebrating the occasion and having receptions for elite members staying at the property on Friday. Send us your experiences by email or leave a comment below.

You can access Hilton’s page for 100th anniversary here.

Here’s Q&A that Hilton posted about its history:

In 1919, Conrad N. Hilton, then a 31-year-old World War I Veteran, entered the hotel business somewhat accidentally. He had traveled to Cisco, Texas during the oil boom to buy a bank, but instead purchased the 42-room Mobley Hotel when the original deal fell through. This decision forever changed the face of travel. Today, hotels all over the world proudly carry his name – as does the world-renowned Conrad N. Hilton College of Hotel and Restaurant Management at the University of Houston.

It didn’t happen overnight. It took decades of innovation, risks, creative marketing and a relatability to travelers across the country and eventually, across the seas. Whether Conrad Hilton was introducing air conditioning to hotels, encouraging staff to think outside the box or relishing watching people mingle in his lobbies, he did it with the belief that if you can expertly provide needed hospitality and bring people of different cultures together, it will only improve the world.

In a rare sit-down interview at his memorabilia-filled office, Dr. Mark Young, historian and archivist at the University’s Hospitality Industry Archives, shares stories and insights about the company and hotel magnate he has studied more than anyone else.

Q: What should people know about Conrad that they probably don’t realize?

I think Conrad is a bit of a mystery to a lot of people. I think they think of him as being very powerful and famous, often times described as a hotel magnate, and to be perfectly honest, he was still the simple guy from territorial New Mexico. Despite all the wealth and fame he had, he was very much a down-to-earth person and could relate to people of all walks of life.

Q: What would travelers today be surprised to learn Conrad was responsible for?

Well, think of the Dallas Hilton, his first namesake hotel. This is pre-air conditioning era, and Dallas can get very hot in the summertime, so it was designed so that no guest rooms would face the western sun, and every room had a ceiling fan which was the cutting-edge technology for the time period. Jump forward to the 1950s. In the mid-50s, committing millions of dollars to air condition these hotels, Hilton didn’t realize it, but they were creating the 12-month convention business for the hotels in Chicago and New York. Today, you expect every hotel to have air conditioning, but that was not the case back then.

Q: Tell us about Conrad the leader. What kind of advice would he give to others who were trying to follow his path?

People would write him, whether it be on hotel operation or just things about life, and he would almost always reply to them. People would often ask him for advice – “How do I become a successful person? What classes in college did you find useful?” His letters were genuine replies. And this is pre-email, pre-computer. These are typewritten letters and people received very thoughtful answers. I recently read a letter where Conrad saw a really smart young person in one of his hotels, and he encouraged them to run with their unique ideas, and you see this time and time again. I’ve interviewed retired Hilton people and they talk about how they were given the opportunity to grow and learn, following Conrad’s edicts.

Q: It wasn’t until a few years and several hotels after Conrad purchased his first hotel that he began including his name in the hotel’s name. Tell us about that.

Conrad built his first hotel in Dallas in 1925, and that’s the first hotel that he puts his name on. The Dallas Hilton wasn’t a hotel that he had bought from someone else, this was his first baby. No matter how old he was, he was always learning things and he would apply it to the company. You go back to the 1920s, and there are very few hotel chains that have the same name across their hotels in different cities. There might be a hotel owner operator who has a hotel in Philadelphia, New York and Chicago or Pittsburgh, but they all have different names and you would never know they were part of the same company. Conrad realized that, and that led to keeping the name “Hilton” on the properties in different locations for reasons of familiarity.

Q: Conrad really harnessed the power of celebrity and pop culture in his business, why do you think that was?

Well, Conrad, in my belief, was a marketing genius. He realized the value of having the celebrity culture nearby in some respect. They often had celebrities at the hotel openings — he would have chartered planes and would fly them in, whether it be the Istanbul Hilton or what was then the Dallas Statler Hilton in the mid-50s. This is a time period where opening a brand new hotel was a novel event and he would always have celebrities there, and then the cameras would be there, so he was very smart about adapting pop culture to the hotel opening. He understood public relations before other people really knew what that was.

Q: Conrad was quoted quite often talking about the importance of world peace. How was that evident in his leadership?

My belief is that Conrad always had an international outlook. He was bilingual, grew up in territorial New Mexico and he went overseas in World War I. He really did believe that if you can bring people of different cultures together, it will only improve the world. In an old internal Hilton employee magazine, a lady wrote in Spanish about what was going on – I think it was at the El Paso Hilton – and she was apologizing for writing in Spanish. Conrad wrote back and said, no, Spanish is spoken a lot in the southwest of the United States, that’s your native language, we should try and learn this — we will only be a better people. So he had this mindset of always reaching out to other people and bringing them in. He lived it, he didn’t just talk it. That’s what he loved about these hotels, is seeing the restaurants or the meeting rooms or just the lobby full of people from different cultures and backgrounds interacting.

Q: Over decades, Conrad began to open hotels in destinations around the world. How did they individually embrace the local culture and environment?

Interestingly, Conrad didn’t insist on his hotels all looking the same. Cities in different locales, he believed, whether domestic or international, all needed to have a certain feel for the environment that they were in, and so he was willing to try different types of architecture. The interior designer David Williams who Conrad hired for many of his hotels, would go and live in the city prior to the groundbreaking to kind of get the flavor, to understand the culture. For instance, before building in Turkey, David lived in Istanbul, and went around taking pictures of the local architecture that would help him kind of come up with his design plan. And because of this, his interior designs didn’t become dated within a matter of years, they lasted a long time. And this is someone who Conrad had enabled, once again, with this freedom and ability. He kind of saw in this man a certain quality, and said, “I want you to be our company interior designer,” and let him run with it.

Q: You’ve mentioned these small touches that can have a big impact and continue to be important to the organization. Could you give an example?

One of the things DoubleTree is most noted for is the cookie, and the cookie story is fascinating because as DoubleTree continued to grow, it did not have the marketing budget to run television commercials. By this time, we’re talking the 1970s into the early 80s. So, no marketing, but what they could do was solidify name recognition and make a memorable experience for guests. They tried different things, and someone hit upon a cookie, a really good cookie. They tried different recipes and had contests among chefs at their hotels for the best recipe. Eventually, they would have a cookie in the guest room, and it’s now kept warm at the front desk to welcome guests. Over the years since it was introduced, more than 443,000,000 cookies have been served at DoubleTree hotels around the world, and many people associate the hotel with the cookie.

Q: Can you imagine the hotel industry without Conrad?

No, I really can’t. In some ways, Hilton is always the benchmark that other people go against. From all different angles, they’re always judging themselves against Hilton. He had such a presence and a “let’s bring everyone in” attitude. And not having that joy, that positive influence, I’m not saying that the industry would be bad or horrible, but it wouldn’t be the same.

Q: As we conclude, can you tell us more about Hilton’s growth in recent years. How does Conrad’s legacy continue to influence the company’s decisions today?

Starting in the 2000s, Hilton was digesting the acquisition of Promus Hotel Corporation, expanding its family of brands to include DoubleTree, Embassy Suites, Hampton Inn and Homewood Suites. What is key, is each brand was allowed to continue doing what they do best, growing and innovating whilst under a new corporate structure. Then in 2007, Barron Hilton sold Hilton to The Blackstone Group, which installed Chris Nassetta as head of Hilton Hotels. You look at what Chris has done from that time period to the present – it’s a remarkable success. He led Hilton through the Great Recession, and then began to grow this company, adding new brands and new technology, but always keeping that personal touch. I would say part of Chris’ success is that he studied what Conrad did and took Conrad’s principles and applied them to today, and that has been, I think, a huge success for Chris and Hilton. 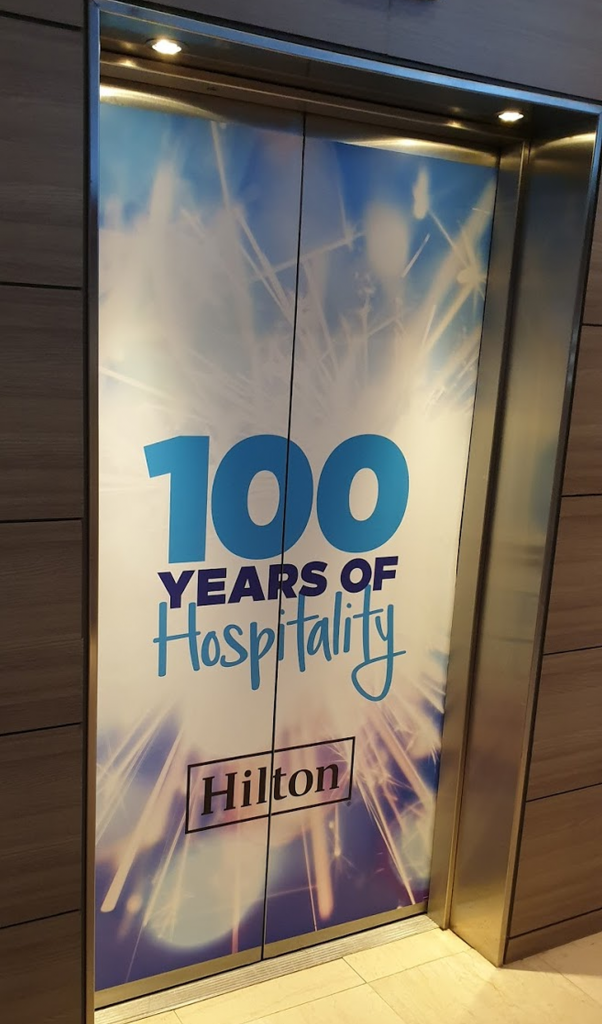 Instead of buying a bank Conrad Hilton bought a hotel and the rest is history. There are not many companies that last anywhere this long.

Some if not most Hilton branded hotels will have events to celebrate this milestone. The Hilton where I am staying at the moment unfortunately had theirs yesterday (Wednesday).

Would be great if readers could either email us their experiences or post below what was happening at Hilton’s around the world to celebrate 100th anniversary.