Yesterday John wrote about Marriott Bonvoy sending out emails with $30/$50 gift cards to select members as a random appreciation gift.

I was lucky enough to get one too and since I was staying at the Sheraton Hong Kong last night decided to put it to the test and redeem it right away upon check-out.

Since John wrote about this, people posted data points of their own gift cards in the comments both here on the website as well as on Facebook.

From what has been written so far we were able to isolate the following:

Since the Sheraton HK where I’m currently staying has a lounge with competent staff I decided to put the gift card towards my room bill for the last two nights straight away. I’m not in the mood to mess around with this at a random front desk on one of my future stays.

The process for the gift card redemption wasn’t easy for the staff. They had to consult their Marriott & Opera training manual and it still took them like 20+ minutes to redeem. Mind you as a former SPG hotel they never had to deal with gift cards. In the end it was successfully applied: 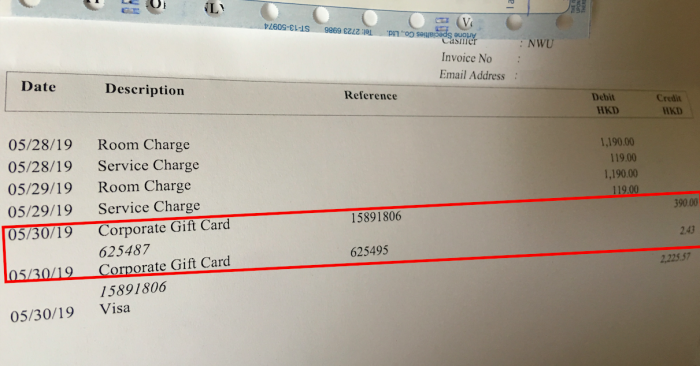 I have to give them credit as far as the exchange rate is concerned as they applied a real time rate according to XE.com instead of an outdated or fake internally set rate.

These gift cards can – obviously – used internationally as well which was one of the reasons why I wanted to try using it today and report back how it went.

I did print the email with the gift card and code for the convenience of the club staff so they can retain it and do whatever it necessary. Considering there were four people involved at the end that was the right decision.

I’m currently on a run to do as many Marriott stays as possible, mostly at former SPG properties as I was targeted for the Double Elite Nights until the end of August and want to take advantage of that. So the gift card came into play at the right time.

This was a nice gesture of Marriott for those who end up using the gift card. The amount of targeted people who do get the card but in fact won’t even use them for various reasons is likely high.

Edit: We now also heard from a couple Titanium members who have received a gift from Marriott as well. Previously only Gold & Platinum customers reported their gifts while those with higher tiers complained that they didn’t receive anything. Reply below with the offer you received and the account status!