Thailand Immigration has now started to utilize the fingerprint scanners they installed at their airport points of entry and a full set of prints (3 scans) will be collected at the checkpoint.

As a result passengers should expect excessive wait times especially at peak hours since this measure pretty much triples the processing time for each arrival.

The machines were installed since early 2019 but not in operation until this month and visitors are now required to leave a full set of fingerprints in addition to the usual photograph before being cleared by immigration.

At least on the first time of being scanned individuals are required to provide their prints in three steps:

It’s possible that for all future entries only one scan will be required like in the U.S. and some other countries who collect but save the full set, only requiring a single one hand scan in the future.

A detailed outline of the system was published by the Chiang Rai Times earlier this month.

Biometrics is a device used worldwide to scan persons coming into or going out of the country on land, sea and air, especially regarding suspected face-lifted transnational criminals and passport forgery. …

The biometrics device can scan any face-lifted suspects and fingerprints which cannot be changed, thus raising the confidence of travelers in the airport’s safety measures. The installation of the biometrics device has been 70% completed and the device which was earlier scheduled to be operable on May 2 and extended for a month, is to be 100% operable on July 1 [2019]. …

With a 2.1 billion baht budget, the project is designed to install 2,000 biometrics devices at 170 spots on land, sea and air throughout the country. In Phuket, the biometric devices will be installed at the airport, piers, immigration units and provincial police investigating office.

A total of 76 biometric devices will be installed at Phuket airport’s arrival terminal and international departure terminal. Thailand is the fifth ASEAN state which has applied the biometrics system.

In general it should be said that improving the integrity of immigration checkpoints is something that should be welcomed though it all depends on the implementation as well.

My experience at Bangkok Airport yesterday was pleasant as I was using the fast track lane (which recently underwent it’s third revamp in just a short time and now requires a new voucher from the arriving airline that will be scanned at the door by service staff) but regular immigration was packed and the line didn’t seem to move at all.

I was the second passenger in line and actually watched the time how long the immigration official needed to process both the traveler ahead of me and myself. Both of us took between 2:30-3 minutes for scanning the passport, taking the photograph and doing the three fingerprint scans. Previously the processing was 1 minute on average, often less.

There seem to be many problems as immigration has a “Biometrics Squad” available: 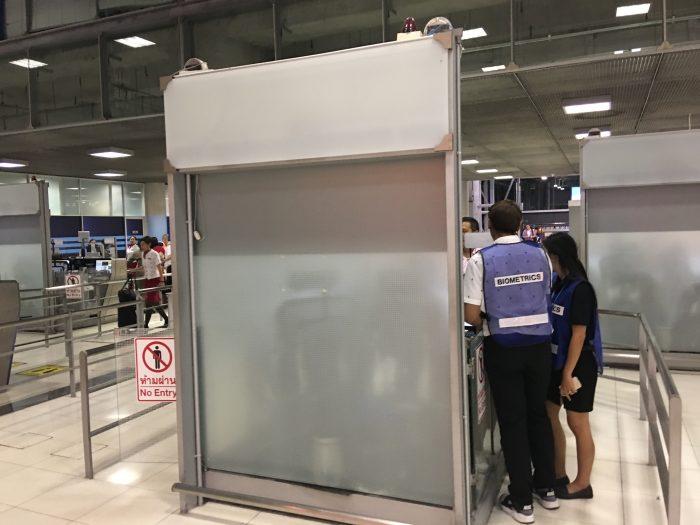 This group of support staff is on site to assist confused passengers to leave their fingerprints and possibly help with technical issues of the devices.

Is all this really necessary? I guess that’s for each individual country to decide. Thailand has established itself as a haven for wanted international criminals over decades due to a combination of lax entry/exit procedures and corruption. If they want to clamp down on that then that’s a good thing in my opinion.

The lineup at the regular immigration where those who don’t have access to Fast Track have to line up was packed and while waiting for my bag I was watching it for a while from behind the counters. It didn’t move at all. And it was a slow evening as I arrived around midnight.

I don’t want to imagine how this is going to transpire during peak hours when passengers line up all the way down the hall up to the duty free stores (frequently the case). This is an even bigger encouragement to arrive at Thai airports in Business Class or book a Fast Track option for arrival.

Talking about the Fast Track, the old vouchers that were given out to passengers don’t work anymore. You need a new one or there won’t be any access to the fast track facility. People previously liked to hoard them for random future use and immigration has clamped down on that as well.