Today I’d like to talk about a frequent Reader Question we received concerning the U.S. Daily Getaways and if it’s really worthwhile to participate considering how popular they’ve become.

Readers have been upset year in and year out about the fact that they aren’t even remotely able to buy any of the more popular items on the Daily Getaways list, so how to approach this?

The Daily Getaways have become extremely popular over the years and I think blogs such as this one had an impact on that as well. In turn, the more people who try to purchase on the coveted packages the smaller the chance that someone actually gets through.

This year has once again been good in terms of what has been put on offer. Unfortunately, American Express was no longer sponsoring this campaign because in the past there were always some nice discounts when using Amex cards. No discounts were available this year for any method of payment.

Now to the question one reader had (and we received many such messages):

Reading your articles about US GETAWAYS and wonder if I should even bother anymore. I tried for two years to buy either HERTZ, HYATT or HILTON points yet never got a single chance.

Every time I tried I was shown an error message, points were sold out or the site crashed. Is this all a waste of time? Are people cheating with electronic means? Sick of trying each year and then being disappointed.

Unfortunately Mark has a point (at least in part) when it comes to the availability of these offers and the result for many interested participants of this contest as I’d like to call it by now.

The U.S. Daily Getaways have long departed from a platform where good deals were available to the average consumer, at least when it comes to the popular offers such as World of Hyatt points as they were on sale yesterday.

I try and buy a large lot each year simply because it makes financial sense considering the price and value when using them at the right hotels but also to gain data points for the readers.

So yesterday I once again tried my luck … and of course initially I was getting the same error message as everybody: 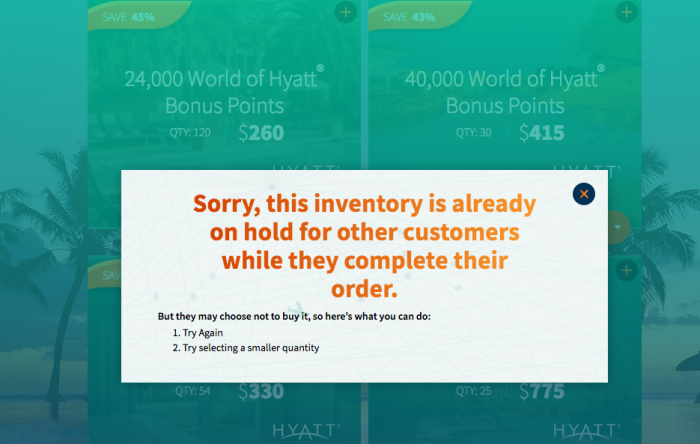 I was already resigned to missing out again as I believe five years ago was the last time I successfully purchased Hyatt points through this campaign.

Then however I couldn’t believe my eyes when I was suddenly prompted to enter payment data for the 40,000 points package:

What did I do? Nothing but clicking back and forth in the most simple way. Not in a crazy fashion but maybe every 10 seconds or so. Eventually the option to actually purchase popped up about 5 minutes past 1pm when the sale started.

I obviously follow the threads on the common travel forums and people were discussing using bots and computer programs to do the bidding for them yet were still unsuccessful. Some others reported the site crashed for them which I can’t confirm from my side despite the rather terrible internet connection I have at the moment.

To be honest, at the time I finally got in I had already resigned myself to losing out again but wanted to at least keep trying until the final package showed as sold out which happened at exactly 1:20pm after I had successfully purchased the one package.

To answer the reader question: Personally I’m not expecting anything out of this promotion anymore and if participating is an inconvenience to you (like you have to wake up in the middle of the night or excuse yourself from work) then I’d likely decide not to bother anymore.

For what it’s worth, the less popular items can always be purchased in the “leftover” section of the Getaways page. Currently (early morning of June 4th 2019) they have left:

The best advise is to treat this Daily Getaways Campaign like participating in the lottery. Don’t expect to get anything when entering the draw. And just like the lottery or maybe rather a slot machine it’s just about that lucky moment when the system lets you slide in.

Sure, you can try to deploy sophisticated IT systems to help you but I asked Adam about it and even he said that it’s not worth the energy to set that up. If time allows then go for it in the future, you might get lucky or you don’t but the chances have absolutely decreased over the years.