Qatar Airways has apparently increased the price for their lounge upgrade option to the Al Safwa First Class Lounge at Doha’s International Airport, the price more than doubled to now 600 QAR (US$165). 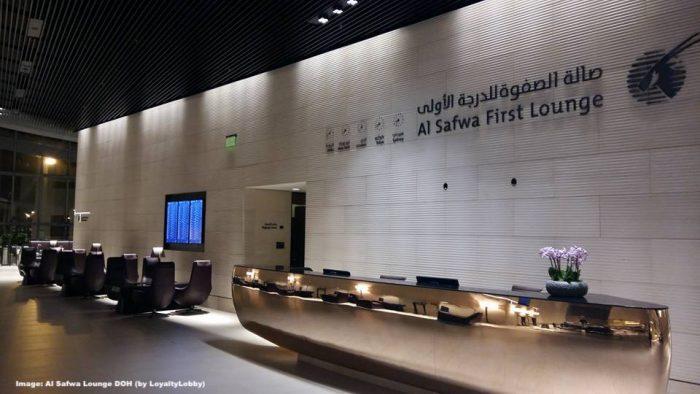 After Lucky from One Mile At A Time wrote about the possible price increase I decided to send a friend of mine scouting today as he was en route to Kuala Lumpur in Qatar Business Class and unfortunately it’s true, the price went up by a lot.

You can access Qatar’s page for Al Safwa lounge here.

Qatar Airways has been selling access to their Doha based Al Safwa First Class Lounge at a price of 250 QAR ($65) for roughly half a year now, and the option has become popular among those who knew about it. It has been discussed on Flyertalk, some blogs and private Facebook groups.

A big advantage of the Al Safwa is that it’s actually quiet, offers 15 “real” bedrooms to sleep in during a longer layover and a decent a la carte restaurant with a premium F&B assortment including vintage champagne.

This is a huge upgrade compared to the ever so crowded Al Mourjan Business Class Lounge where the F&B has been greatly diminished over the years and where there is really no appropriate rest area (the one next to the showers is a joke, little noisy “Quiet Rooms” without doors and ceilings.

I wrote about Al Safwa in 2016 when the lounge first opened (see my previous article here).

I purchased the $65 access last time in March of this year and it was a good deal in my eyes.

Now my friend reported back to me this morning:

Yeah, no thanks. Unless having a bed for a few hours is really important to you and you don’t want to take a taxi ride to a nearby hotel, I wouldn’t pay the increased price anymore and just stick to Al Mourjan Business Class.

It was probably just a matter of time until the price went up. This was never a published, advertised promotion but rather an inside trick to get into Al Safwa. Unfortunately that comes with the phenomenon that those who actually do pay for access look to get their money’s worth.

I’m sure Qatar has seen that these folks (myself included) liked to diminish the champagne stock and F&B options. This eats up any profit QR could make from the upgrade/admission fee.

EXTENDED: Qatar Airways 30% Off Sale + Bonus Qmiles Offers Both For Bookings Until October 11, 2020

Airfare of the Day [QSuites] QATAR AIRWAYS Hong Kong to Athens from $1,746

Airfare of the Day [QSuites] QATAR AIRWAYS Madrid to Tokyo from 1,588€