Emirates has today confirmed the launch date for its long awaited daily service between Dubai and Mexico city via Barcelona. 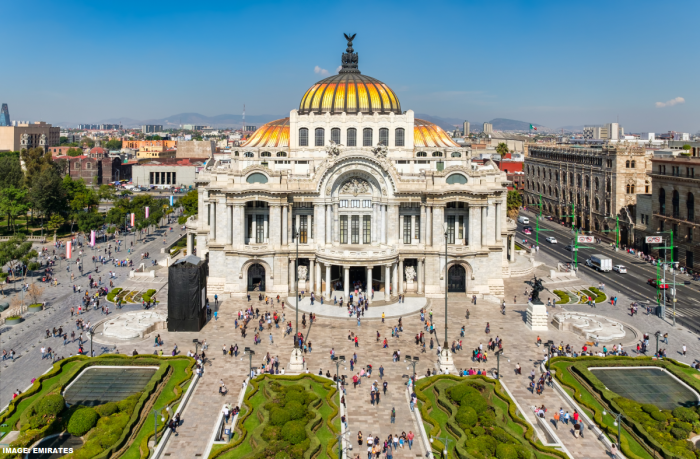 You can Emirates here.

Emirates cannot serve the route directly due to the altitude of Mexico City and thus one-stop via Barcelona that is almost as direct as a non-stop route.

It is unfortunate that this plane is on 2-2-2 configuration, which is ok for couples but not good for single travelers.

Here’s the press release from the Emirates:

Emirates to launch services to Mexico City via Barcelona

Emirates’ Mexico City flight will be a linked service with Barcelona, meaning that customers can now travel between the two cities in unprecedented style and comfort.  Citizens from Mexico, Spain and the UAE only need their passports to enjoy visa-free travel to each respective country.

The new route will be operated with a two-class Emirates Boeing 777-200LR which offers 38 Business Class seats in a 2-2-2 configuration and 264 seats in Economy Class. The new 777 flight will also offer up to 14 tonnes of cargo, opening up access to more global markets for Mexican exports such as avocados, berries, mangoes, automotive parts and medical supplies.  Emirates SkyCargo has been flying freighters to/from Mexico City since 2014 already and in the last year carried over 22,500 tons of cargo on the route.

Sir Tim Clark, President of Emirates Airline said: “We are excited to be able to introduce new air connectivity between Dubai and Mexico. The availability of high-quality, daily international air services is essential for the development of tourism, business and cultural ties. Trade, especially in high-value and time-sensitive products, will be facilitated by the ample cargo capacity on Emirates’ Boeing 777 aircraft. We also expect tourism to receive a major boost from the daily flights on our newly-refurbished Boeing 777-200LR.”

Sir Tim added: “Due to the high altitude of Mexico City airport, it is not possible to operate a non-stop flight from Dubai, and Barcelona was a natural choice for a stopover. We are pleased to offer a direct connection on the route between the Spanish city and Mexico City that has long been neglected by other airlines and remains underserved despite the strong customer demand. We would like to thank the authorities and our partners in both Spain and Mexico for their support of the new route and look forward to provide our unique product and award-winning service to travellers.”

“Mexico supports the launch of the long-awaited flight Dubai-Barcelona-Mexico City, which responds to Mexico’s Government tourism policy towards opening new markets and strengthening connectivity between the Middle East and Mexico. We are eager to receive tourists from this part of the world”, said Mexico’s Minister of Tourism, Miguel Torruco Marqués.

“Emirates’ arrival will bring a significant contribution to our international connectivity network by adding up daily services to Dubai and beyond. Emirates will be the 43rd carrier operating international flights into Mexico … congratulations!!”, said Rodrigo Vasquez C, Director General, Mexican Civil Aviation Authority.

Mexico City, the first destination in Mexico to be served by Emirates, is the largest city of Mexico and the most populous city in North America. Mexico’s capital is one of the most important cultural and financial centres in the Americas, accounting for nearly a third of the nation’s GDP. Located in the Valley of Mexico at an altitude of 2,240 metres, the city is famous for its historic centre known as Zocalo, a designated UNESCO World Heritage Site. Mexico City is also an important trade and industrial city, specifically in the automotive, medical supplies and pharmaceutical industries.

Mexico is a popular destination for business and leisure travellers around the world, in particular from UAE, Spain, India, Pakistan, Singapore, Egypt and Lebanon. Mexico is also home to Middle East communities that can now take advantage of the new service.

Dubai is also increasing in popularity with Mexican travellers. In the first 5 months of 2019 alone, Mexican visitor numbers to Dubai have grown by 32% compared to the same period last year*.

Passengers flying with Emirates can book a Dubai Stopover package which will allow them to stay in Dubai for a few days on their way to/from one of over 140 destinations. Dubai offers everything from desert outings to beaches to family-friendly hotels, and even ski slopes at the Mall of the Emirates. Having become the fourth-most-visited city in the world, Dubai is known for its eclectic mix of offerings, from futuristic architecture to vibrant traditional culture and diversity. Passengers on the route can also decide to stop over in Barcelona on their way to/from Mexico or Dubai.

Emirates flight EK 255 will depart Dubai at 03:30 local time, arriving in Barcelona at 08:00 before departing again at 09:55 and arriving into Mexico City at 16:15 on the same day. The return flight EK256 will depart Mexico City at 19:40 local time, arriving in Barcelona the next day at 13:25. EK256 will depart once again from Barcelona at 15:10 bound for Dubai where it will arrive at 00:45 the following day, facilitating convenient onward connections to numerous destinations in India, South East Asia and the Middle East.

Passengers in all cabin classes can enjoy the friendly service from Emirates’ international cabin crew, meals prepared by gourmet chefs, and over 4,000 channels of movies, TV programs, music and podcasts, including channels in Spanish, on its award-winning ice entertainment system.

AeroMexico flies this same route three times a week while daily service is preferred by business travelers. It is good that Emirates has now decided to open it (what happened to Panama City?).

Emirates has cut down on number of fifth free routes it flies while they are often fun for passengers. There are few left like Bangkok – Hong Kong, Denpasar – Auckland, and Rio de Janeiro – Santiago de Chile.

Airfare of the Day [Business Class] EMIRATES Tokyo to London from $2,300