Spohr took the position that fares under 10 Euro shouldn’t exist in the market, despite his own airline selling tickets in the one digit range and then tags on a bunch of fees (pure profit for the airline).

Lufthansa has been able to munch away on German customers for decades without any real competition in the domestic market and to a degree the continental market as well. For a few years now the budget carriers Ryanair and Easyjet, which are now both operating bases in Germany, are giving LH a run for their money.

Spohr said in an interview with the Swiss NZZ Sunday Newspaper that the competition sells loss making tickets and that there should be a barrier under which ticket prices shouldn’t fall.

“Nobody is going to push us out of our home markets,” Spohr said. Still, “The price war leaves its traces with us as well.”

Ryanair, for example, sells tickets from Berlin for less than 10 euros to Budapest, Barcelona and Rome and a range of other cities. The one-way fares exclude checked bags or reserved seating which is also a (negative) trademark of Lufthansa Basic Economy fares. The difference: Lufthansa tags on phony surcharges instead of including their profit margin into the ticket price.

It didn’t take long for Ryanair to mock Lufthansa per a new ad on their website:

It has the same quote from Spohr I mentioned above and a prominent price tag of 9,99 EUR to even undercut his “10 Euro barrier” by one cent.

What is Lufthansa selling in the meanwhile (for years now)?

2,00 EUR Tickets from Frankfurt to Berlin: 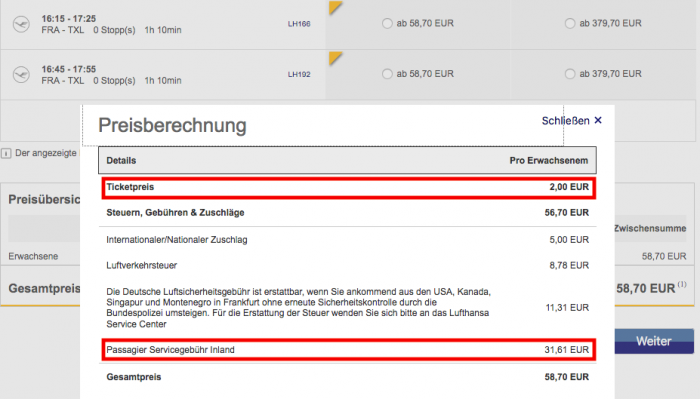 The base fare for said ticket is 2,00 Euro and an additional 31,61 Euro “Domestic Passenger Service Charge” plus the legitimate airport and government tax of ~ 24 Euro. 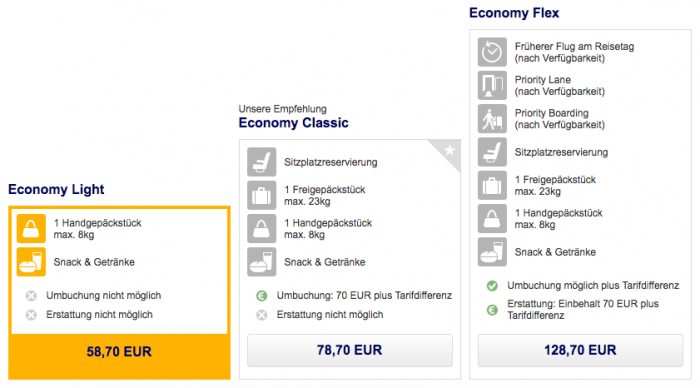 This fare doesn’t include seat reservations or checked baggage. The only inclusion is a carry on of 8kg total weight and a snack/drink on board. That is if the caterers aren’t on strike as they currently are, chances are that you’d get scrap to eat or drink at the moment (not that you need it on a 45 min flight but it would still be deceptive advertisement otherwise).

Maybe, just maybe, Lufthansa should clean their own house before accusing the competition of destroying their business model of gouging customers?

Flying became way too cheap over the last decades and yes this has a negative impact on the environment. If you take Air Asia’s slogan “Now everyone can fly” you can ask the question “Yes, but should they?” from an environmental perspective. That’s a very privileged position to take though, spinning the idea further and pushing prices up again would in the end result in a large part of the population not being able to use commercial air travel.

Let’s be clear though: I don’t believe for a second that Mr. Spohr’s real concern is either the environment or the economic situation of the lower part of society. He is concerned about his own bottom line and the earnings of Lufthansa, which have been dwindling since competition exerts pressure on the carrier.

The carrier has been selling artificially low fares for years, tagging on outrageous fees with different designations which in the end result in a total that exceeds the base fare by a multiple. In the Frankfurt-Berlin example above the Passenger Service Charge if 16 times as much as the base fare of 2,00 EURO and nothing but pure profit for Lufthansa.

The same goes for the redemption of miles from the Lufthansa Miles&More program where the base fare is naturally zero as it’s paid for in miles, but the surcharges for a long haul flight can be several hundred Euros. CEO Carsten Spohr should think over his own deceptive advertising practices and then start a new, honest discussion about the ecological basis of cheap flights.