Both Marriott Rewards and Starwood Preferred Guest (SPG) members were eligible for various lifetime statuses in their respective programs that had different qualification requirements (Marriott versus SPG). 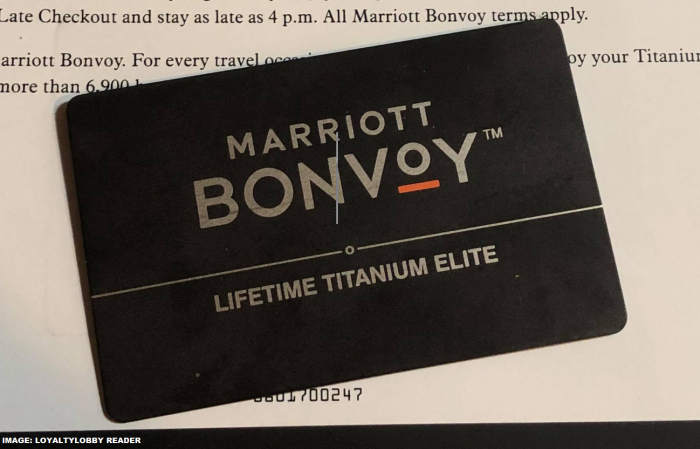 When these programs were merged last year, Marriott launched new tier called Titanium and at first only legacy Marriott Rewards members with enough nights and earned points were eligible for its lifetime version. Soon, Marriott reversed the decision after uproar among legacy Starwood members and made it available for SPG’ers too, as  as those who after combining accounts were eligible for it.

You can access Marriott’s page for lifetime status here.

Members can currently earn only Silver, Gold or Platinum lifetime status with Marriott Bonvoy. The lifetime Titanium was offered only during the program merger for those who:

1. Qualified for Marriott Rewards Lifetime Platinum that required (at the end – qualification criteria changed several times over the years) 750 nights (could have been from anywhere) + 2,000,000 million points earned from any activity (credit cards, point purchases etc.).

3. Had earned Platinum status on SPG and Marriott accounts 10 times and consumed minimum 750 nights after combining them.

Marriott Bonvoy has now started to send members packs for those that have qualified for the Lifetime Titanium that comes with a metal membership card and a leaflet:

Here’s piece about my lifetime SPG Platinum kit from 2017:

Hilton Honors is rewarding their lifetime Diamond members too:

Have our lifetime Titanium readers already received their new membership cards? I have not, but it seems that it always take some time for Marriott to send packages such as this for members whose address is outside of the United States.

I actually ended up qualifying for the Lifetime Titanium status on both of my Marriott Rewards and SPG accounts. There is no benefit of combining them so decided to leave them just as they are.

The SPG lifetime kit was nice and came with personalized map of all destinations where you had stayed with them. I thought that it was very nice touch.