Two United Airlines pilots that were scheduled to operate flight UA162 on Saturday morning failed a breathalyzer test and were arrested.

The flight from Glasgow to Newark was canceled as a result. The pilots are going to appear before a court on Tuesday. 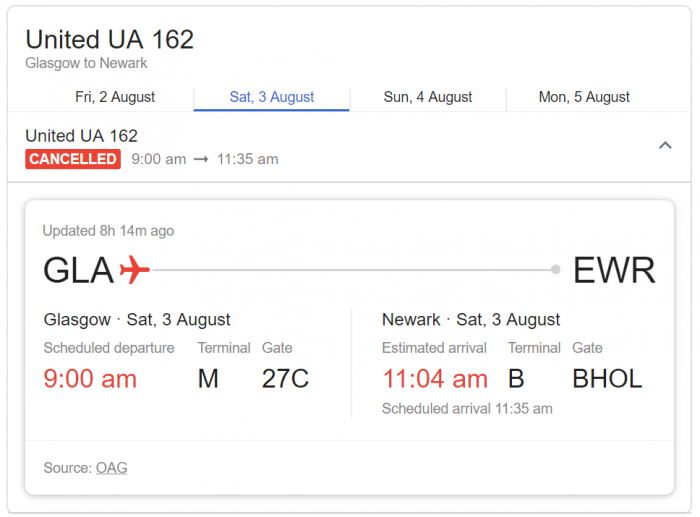 Affected passengers should exercise their rights per EC 261/2004 and seek 600 euro compensation from United as well as have the airline rebook them to the final destinations at the earliest opportunity.

The airline is also required to provide duty to care (accomondation & meals) for passengers that are delayed longer than few hours.

Here’s an excerpt from the Sun (access their piece here):

The pair are expected to appear at Paisley Sheriff Court on Tuesday.

They both were arrested before boarding flight UA162.

Police Scotland confirmed their officers were called to the airport at 7.35am.

A force spokeswoman said: “Police Scotland can confirm that two men, aged 61 and 45, have been arrested and remain in police custody pending a scheduled court appearance on Tuesday 6 August for alleged offences under the Railways and Transport Safety Act 2003 (Section 93).”

Here what happened to other set of United pilots that went on a drinking binge in Glasgow in 2017 (access the BBC’s piece here):

First Officer Paul Grebenc, 35, was sentenced to 10 months in prison.

His colleague Carlos Roberto Licona, 45, was jailed for 15 months.

Both had been arrested while preparing to take off from Glasgow on 27 August 2016.

Pilots really should know better than going to a pub crawl/drinking binge before operating a flight the following morning. These are usually career ending events and it seems that they will get some jail time in Glasgow if found guilty.

There has been talk about fatigue among pilots and cabin crew due to shortened layovers at destinations (airlines trying to save money). Some crew members perhaps feel that they need to hit the bottle to relax and here’s the result.