A United Airlines Express flight attendant has been caught on video appearing intoxicated with a slurring voice and following take off, passing out for the entire duration of the flight. 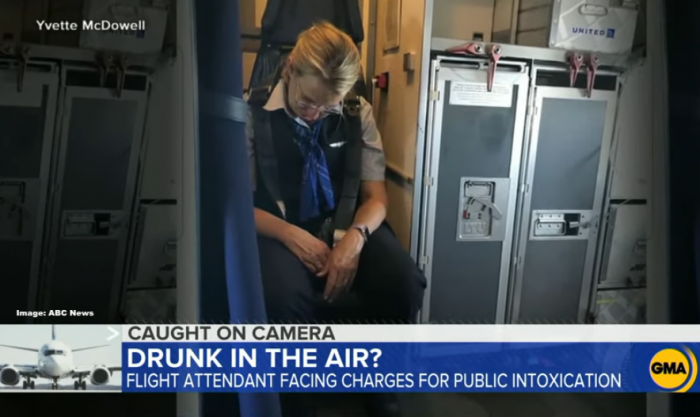 Following complaints to local law enforcement, police officers boarded the aircraft after arrival at the terminals and detected a breathalyzer result five times over the legal limit for flight attendants.

This particular United Express regional flight only had ONE flight attendant in the small cabin and, unfortunately, that crew member was totally drunk, slumped over in her seat. She has since been terminated by her employer, Air Wisconsin.

You can read up on the entire story in this piece by ABC News:

A flight attendant was charged with criminal public intoxication on Thursday after passengers aboard a United Express flight raised alarms and one tweeted a video appearing to show her slumped over in her seat.

Julianne March, 49, from Waukesha, Wisconsin, was charged with the misdemeanor by prosecutors in St. Joseph’s County, Indiana. United Airlines earlier Thursday confirmed passengers had reported a flight attendant who appeared to be under the influence during the United Express flight from Chicago to South Bend, Indiana, on Aug. 2.

When the plane landed in South Bend, officers boarded, March started crying and, when asked which city she was in, said Chicago, the criminal complaint said.

And when administered a Breathalyzer test, her level was 0.204, five times over the legal limit for flight attendants, the complaint said. …

The flight was operated by Air Wisconsin — meaning it was an Air Wisconsin crew and flight attendant. An Air Wisconsin spokesperson said, “The Flight Attendant involved in this incident is no longer an employee of the company. We will continue to cooperate with local authorities and assist them as necessary.” …

After everyone boarded the flight and the plane was still at the gate, the flight attendant started to make the security announcement but her speech “very slurred,” according to Scherb.

He said he then noticed her bumping into several seats and passengers as she walked up and down the aisle to check the overhead bins.

While they were in the air, Scherb said a female passenger noticed the flight attendant didn’t have her seat belt on and helped strap her in.

Passengers were obviously highly irritated by the behavior and appearance of the flight attendant. I’m surprised nobody knocked on the cockpit door to inform the pilots that their only flight attendant had passed out in the cabin.

The flight attendant was booked and charged with public intoxication. The image taken in jail speaks volumes: 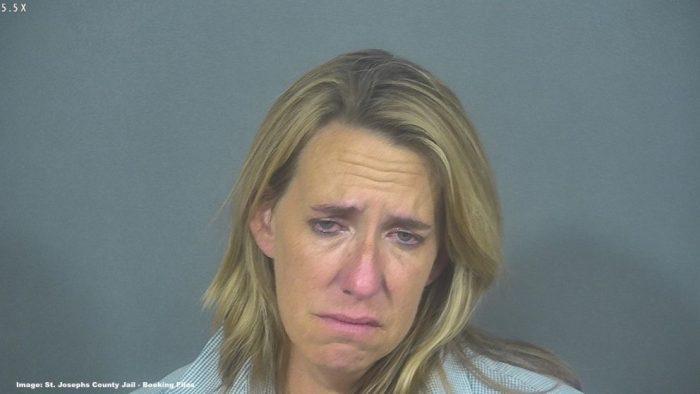 It’s strange how even the cockpit crew didn’t notice how their sole flight attendant is under the influence of something, or in the very least not feeling well. Were they trying to cover for her or just totally oblivious to the situation?

Meanwhile the crew member was released from St. Joseph’s County, Indiana, jail on her own recognizance and is due back in court on Aug. 29.

March was a probationary flight attendant who had been on the job only a few months, and was fired on the terms that she didn’t complete the probationary time period, a source said.

United has offered the quoted passenger who complained a $500 voucher or 25,000 miles. It’s not known if United has contacted other passengers proactively with the same offer. Either way a compensation in this case isn’t addressing the main issue.

With all the alcohol related incidents in recent time (including pilots) it might be time for airlines to adopt a zero alcohol policy for their crew and not just the .04 for alcohol as set by the FAA. Allowing any amount of alcohol encourages people to gamble and have “one too many”. Set it to zero and also introduce spot checks.