Today our Compensation Clinic is reviewing a stay I had last week at the Doubletree Kuala Lumpur where I had a very bad experience including a double downgrade (all pun intended). 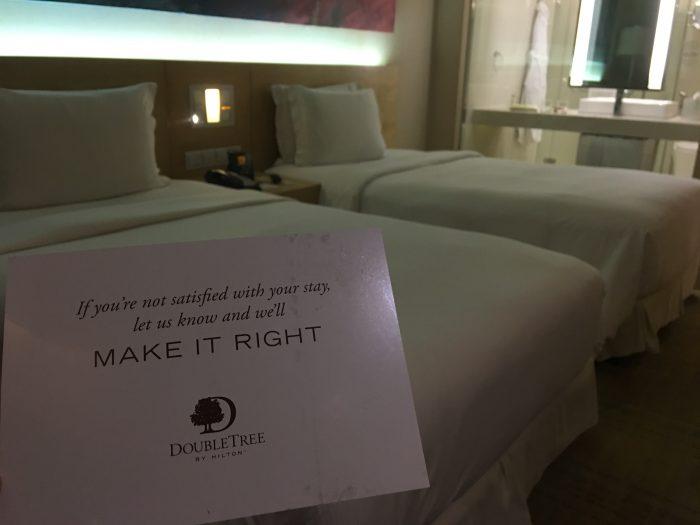 This was a last minute work trip and I have stayed at this Doubletree multiple times before without any issues, quite the contrary I find their lounge to be solid and rooms as well as location (walking distance to KLCC) comfortable. Hence, I had no problem checking the availability for this property and booking a Deluxe Room for one night.

The reservation was done the same evening, at a time where the hotel still sold at least 4 room categories.

To illustrate, here is how the hotel displays them on the Hilton website (data taken today):

On the day of my stay this room was charged at 44,000 points. I was booked on a revenue rate. 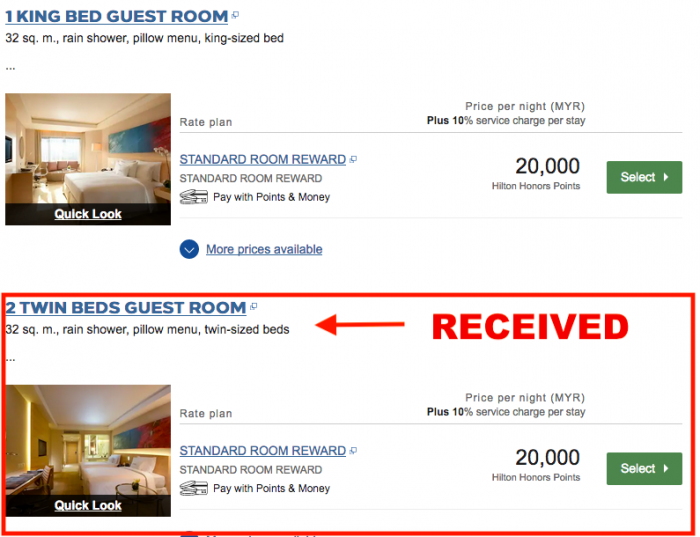 The above are Standard Room categories. Mind you none of these room types actually have a designation of smoking or non-smoking, something that will play a part later in the argument with the hotel.

I arrived at the property around 10:20pm to check in and was informed the hotel would have only a smoking room left and if that would be acceptable. I declined and said that is not possible under any circumstances.

When checking the hotel policies on their website it only says “Smoking Available” which can mean pretty much anything or nothing.

Since the conversation already took a very negative drift I decided to call the Hilton Diamond Guest Assistance and let them mediate the matter, trying not to get into a pointless argument. The employee isn’t even a manager so why go crazy…

In the end the agent was able to find a Standard Room but not with a King Bed as reserved but a Twin Bed. It was late and since this was the only option I accepted that. I also asked Guest Assistance what the standard course of action is here since this essentially represents a double downgrade:

She created a case that would flow back to the hotel. I would discuss compensation with them in the morning and then Hilton Corporate would review it.

The room was basic at best and semi-filthy at worst. Mold in the shower, broken tv remote control and a worn out couch with holes in it. 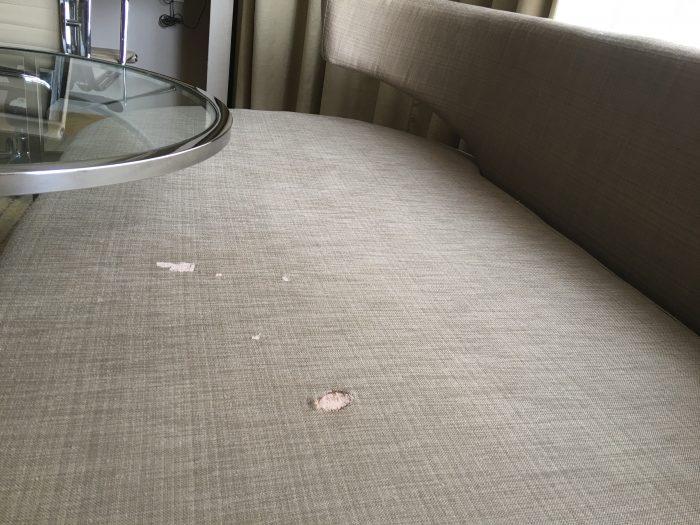 The next day upon checkout I talked to the Front Office Manager whose position was that it’s the problem of the guest if he checks in late and no rooms are available. There would be no compensation for this from the hotel. The argument got heated and eventually I sent him away as this became pointless, I’d rather escalate it with Hilton as discussed before.

I did pay the 10 MYR mandatory tax in cash, got a receipt and left the property. Of course the hotel had my credit card from check-in and I told them if they want they can charge it but I won’t sign for it and there might be a chargeback if the situation isn’t resolved. I also made notes in that regard on the registration form.

Following that, I replied to Hilton Guest assistance that the meeting with hotel management didn’t result in any positive feedback and they refuse to rectify the situation. I asked them for:

… I would like to express my sincere apologies for falling short of our commitment to extend a rewarding experience during your stay. In an effort to make amends for your experience, a total of 44,000 points will be posted to your Hilton Honors account within 24 hours.

The Voice of our Customers is critical to ensuring our guests receive a rewarding experience when staying at the Hilton Portfolio of Brands. Thank you for bringing this concern to our attention. …

The points were added quickly. I replied that I had received them, thanked for their assistance and suggested a visit by the local area manager/VP to the property to uphold brand standards.

Generally speaking, the behavior of the Front Office Manager was absolute appalling making this the fault of the guest and acting like the hotel doesn’t have to provide compensation for this. Had this happened with Marriott there are actual fix monetary amounts in the brand standard manual and MR rules say what the hotels have to pay the guest in cash (US$100 for Room Guarantee).

If you encounter hotels who are difficult always relegate it up the chain of command with the respective corporate departments!

This episode was entirely unnecessary aggravation. I get the point that hotels might sometimes be oversold or at least out of rooms, but then why sell these rooms even the same evening of the arrival? The property knows full well, latest in the afternoon what their occupancy situation for the night is.

As far as their excuse with the smoking rooms go: it’s ludicrous at best. Basically, by not designating any of their rooms as smoking or non-smoking when selling them they could play mix and match with the customer however they want. I’m actually surprised that there still are smoking rooms in Kuala Lumpur in 2019 as many properties have gone completely smoke free.

Airfare of the Day [QSuites] QATAR AIRWAYS Chicago to Maldives from $2,190