This week I decided to withdraw a case with the German Air Consumer Ombudsman “Schlichtungsstelle fuer öffentlichen Personenverkehr e.V.”, which we have recommended on multiple occasions.

My file was about a baggage claim with Lufthansa that occurred in December of 2018, filed with the ombudsman in late January and until today has been untouched as they had a “case overload”.

We have featured several successful cases over the years that were mediated by the German Ombudsman SÖP (access their website here) and have recommended the service to many of our readers when they ran into issues, especially with Germany based Airlines Lufthansa & the now defunct Air Berlin, or cases where the claimant has a connection to Germany, be it as a resident or if the flight ended/originated there.

I’ve covered their backlogs previously and based on what the SÖP says their lack of response is related to an increased caseload due to Lufthansa strikes in Germany. However the last one was late 2018 and since then the Ombudsman has apparently not done anything with the cases it has shelved.

My patience with this case was simply at an end and I want it off the table. Worst case I’m going to hire a personal attorney to pursue the matter.

I received the following email from the SÖP in which they outline details of their caseloads and how it swelled up over the last year.

The email says that the ombudsmans office received almost 12,000 complaints in the third quarter of 2018 which is equal to the caseload of the entire year 2017. Hence the office was suddenly swamped with cases and not enough staff to process them.

Currently they are handling the cases from September 2018 and the manager is unable to put a finger on it when my case from late January will be handled.

They provided me a graphic as well: 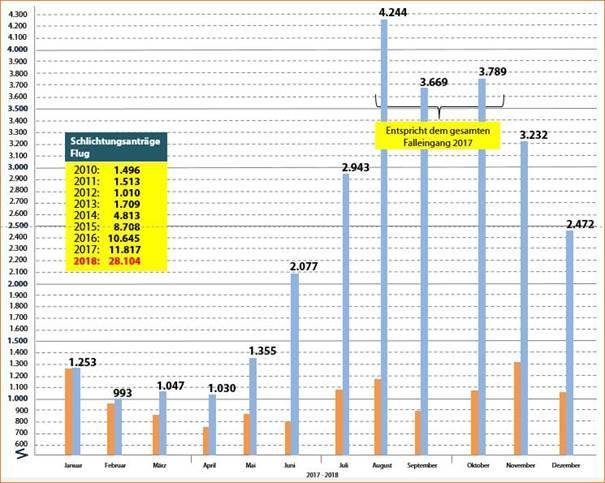 It seems like passengers in Germany aren’t very happy campers at the moment. Keep in mind that the SOP doesn’t just handle air related cases but also railway, long distance buses and the public transport sector. This doesn’t help to reduce the amount of cases to be handled.

I wish this had been made clear on their website, as if it had been I wouldn’t even have filed my case with them. They knew about this problem by the end of 2018 and in my opinion an honest information informing people of their case processing time would be a reasonable approach.

For the time being, I can’t recommend to use this service any longer as it’s simply not practical to have this hovering around for over half a year.

If the monetary amount of compensation in a particular case isn’t that high, maybe it’s better to just give it into professional hands to have it processed expediently. The cut that professional claim services take is around 25-30% so one has to decide if it’s worth it. An attorney (in Germany) usually recoups their own fees from the airline while the claim services make the customer pay.

I basically wasted 8 months of time by giving my matter to the SÖP. Would they have told me upon filing that this takes pretty much the entirety of 2019 then there is no way I’d have proceed with them.

Now I have officially withdrawn my mediation and can take my own steps again to resolve the matter. I will contact Lufthansa Customer Relations one more time to see if they are now willing to solve it to my satisfaction and if not then a personal attorney can handle it.

There is trouble brewing with the combined Air France-KLM due to the financing needed from their respective national governments. French and Dutch released their proposals...

Thailand Extends The Ban On Foreign Passenger Arrivals Until 31st May...