The new Beijing Daxing International Airport (PKX) has opened today and according to the airport authority more than 60 domestic and foreign carriers are beginning to slowly move their flights over from the old Capital Airport.

Construction of the the new mega airport began in 2014 and was officially completed on the 30th of June 2019 with operations beginning today ahead of schedule and on time for the 70th anniversary of the PRC.

Passengers might now need to check carefully which day they will be flying to Beijing, because the two airports are quite far apart from one another and some foreign carriers will only operate part of their flights from the new facility, while on other days still operating to/from the old airport.

The Guardian reported this morning about the opening ceremony at Beijing Daxing Airport:

China has opened a vast, multibillion-dollar airport in the country’s capital, in the run-up to a major political anniversary. …

The new mega-airport, the second in Beijing, was designed by the late architect Zaha Hadid in the shape of a starfish with five connected concourses. It is said to be the world’s largest single-building airport terminal. At 700,000 sq metres, with four runways, it is expected to be able to handle 72 million passengers a year by 2025. By 2040, the airport is expected to expand to eight runways and accommodate 100 million passengers a year.

Officials say Daxing will alleviate traffic pressure on the city’s existing international travel hub, Beijing Capital in the north-east, which had more than 100 million travellers last year, second in the world only to Hartsfield-Jackson airport in Atlanta, Georgia, in terms of passenger traffic.

China is expected to surpass the US to become the world’s largest market for airport travel by 2022. But the aviation sector has a poor reputation for flight disruptions, the result of frequents delays caused by overcapacity and delays caused by the military, which controls most of the airspace. Officials hope the new airport will lessen those delays.

Domestic and foreign airlines, including China Southern Airlines, China Eastern Airlines, Air China as well as British Airways and Finnair, have said they will move all or part of their operations to the new airport.

Here are some impressions from the new facility: 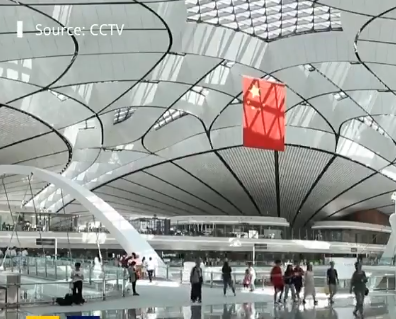 Daxing is located to the South of Beijing, a significant distance from the city center and especially the old Capital Airport.

The distance between airports is another reason why passengers should study their departures closely.

This split operation between the old capital airport the the new Daxing Airport will cause plenty of confusion both with passengers arriving but especially those departing and potentially missing their flight if they go to the wrong airport as the distance between Capital and Daxing is substantial, you can’t make that up if you arrive two hours before the flight at the wrong airport.

This new airport terminal will definitely have a few kinks to be worked out in the beginning so a soft operation is likely a good idea. Does it sound great that foreign carriers are operating half/half? Not really.

If the reports that Air China will keep the majority of operations at Capital Airport hold true, then all Star alliance arrivals at Daxing will find themselves short of domestic or international connection flights. Especially bad for those on reward tickets that require the same alliance.