Japan Airlines has added a feature to their seat maps that is truly worth a mention during a Fabulous Friday this week: A warning icon to display when babies are assigned a certain seat!

The icons make known that the respective seat is reserved for a passenger with a child (infant) up to two years of age and allows other passengers to seat themselves far away if so desired.

Japan Airlines had a good idea with this as in fact it can be extremely annoying to sit next to small children traveling – just as well as next to certain adults but there is yet a reliable system to be found for annoying passengers in general.

I did a dry run on JAL’s website and looked for a flight from Tokyo to Vancouver, a route I fly frequently and which always has plenty of children on board.

Indeed I was able to spot the symbols right away.

Here is the Business Class cabin:

And the same in Economy Class seated at the bulkhead: 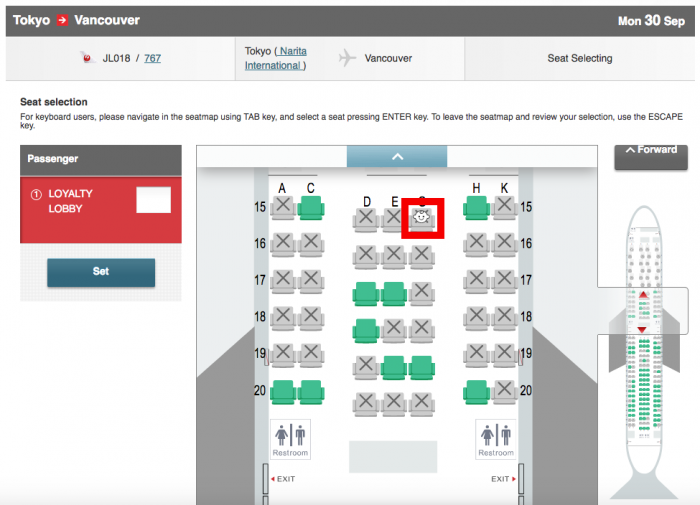 Sitting in one of the bulkhead seats is popular due to the additional legroom but it’s also the area where passengers traveling with babies can utilize the bassinet so there is always a risk involved by selecting this seat.

Usually I recommend to always at check-in if there are any children seated around you and the agent can look it up. You can then still change the seat as long as there are some available.

The downside of this system is that it isn’t 100% accurate. There are instances where the display isn’t relaying the information properly as Japan Airlines describes:

Child icons are not displayed in the following situations:

In addition to that a child that is older than 2 years and no longer eligible for an Infant ticket wouldn’t be displayed as a child either. Maybe this could be improved in some way?

To really make this efficient the icon should appear for all children up to an age of let’s say 12 years of age. The exclusions as mentioned on the JAL website aren’t exactly contributing to a fail safe system either especially because tour groups and of course award tickets are quite popular in Japan.

As mentioned before, other passengers can be annoying irrespective of age. We have to accept that flying is pretty much mass transport and despite best efforts of the airlines not a very private form of transportation.